Can You Tornado-Proof A Home?

How to protect your house from an EF-5 tornado--and why FEMA doesn't recommend you even try. 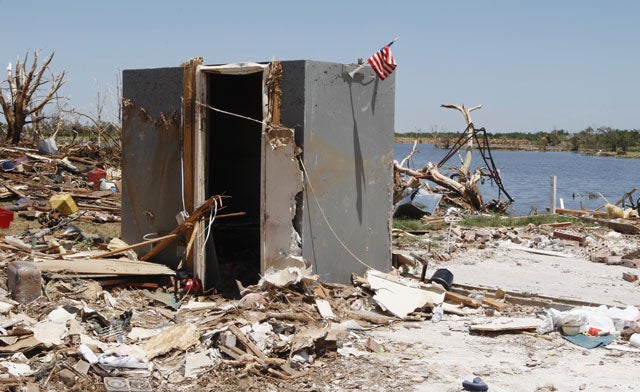 As with so many “is it possible” type questions, the answer of whether you can have a tornado-proof house is a resounding “well, yes, but.” In this case, that sentence goes: “Well, yes, but it would be prohibitively expensive and ugly, and nobody really recommends you even bother.”

What is tornado-proofing? According to the Federal Emergency Management Agency (FEMA), for a structure to be “tornado-proof” it must be, literally, missile-proof. The most damaging and unpredictable destructive force of a tornado isn’t the swirling winds, it’s the debris that the tornado picks up and hurls around, often at speeds in excess of 200mph. “Missile” is the right word when you’re talking about a refrigerator flying through the air at 200mph.

The weak points in your house are windows and doors, obviously, but the most dangerous entry point may come as a surprise: it’s your garage door. Garage doors aren’t usually very sturdy, and if they blow down, the rush of wind can cause your house to become pressurized, like a can of soda. In extreme cases, wind can explode into the main house and blow down walls or even the ceiling. The other possible danger is in traditional insulation: air at this speed can cause serious damage, and if air can get between your walls at tornado-level speeds, they don’t stand much of a chance.

Can you tornado-proof a whole house? Sure. You can live in a house made of solid concrete, with a steel door and no windows. You’d probably have to build it from scratch, though.

Uhhhh… Well, yeah, that doesn’t sound like a real pleasant home to me, either. That’s why nobody really tornado-proofs an entire house; it’s expensive and for the 99 percent of the time that you’re not being bombarded with a tornado, you’ll hate it. But that’s really the only way to fully tornado-proof a home: thick concrete, properly anchored in the ground, will withstand pretty much anything. There are lots of products that call themselves tornado-proof, from Pittsburgh Corning glass to reinforced concrete-and-styrofoam insulation blocks, and they’re not bad ideas, but they’re expensive and don’t address many of the weakest points of a home. If you’ve got a garage, all the wildly expensive tornado-proof glazed glass in the world won’t make your home impenetrable.

So what should you do FEMA does not recommend attempting to tornado-proof your home. Instead, it recommends a safe room: an internal room, like a bathroom or office or large closet, which can be modified to meet the International Code Council (ICC)-500 standard. ICC-500 is the product of a joint, decades-long effort by FEMA and Texas Tech University’s Wind Science and Engineering department, known as WISE, to figure out exactly how best to protect a home from out-of-control winds.

You can view the complete document here, but in short, it requires that this room be fortified to withstand a 5 on the Enhanced Fujita scale, typically referred to as EF-5 level winds. EF-5 level winds are in excess of 200mph, so the FEMA code stipulates that the room must be reinforced, typically with concrete but sometimes with steel or even a combination of steel and wood.

Safe rooms can be retrofitted, but that can be very expensive, having to tear out walls and such. FEMA suggests, for a lower-priced option, to build an entirely new structure within the house, preferably in the basement or garage. It’s not really the kind of project you want to do yourself; they have to be anchored in the ground, and the materials are necessarily difficult to manipulate. FEMA estimates that a family-sized safe room, which could double as storage or a closet, should cost around $6,600 to $8,700. There are theoretically programs to assist homeowners with this cost, although they won’t cover the entire project.

Underground structures are generally preferable, but have distinct downsides: they may not be accessible to disabled people, and they can be flooded much more easily than above-ground shelters.

What about all that tornado-proof tech? There’s a lot of interesting stuff out there that claims to be tornado-proof, from steel-reinforced hollow doors (which cost as much as an entire safe room) to a cabling system that anchors your home to the ground. Tornado-proof windows, like those from Pittsburgh Corning, are similar to bulletproof glass: it’s usually laminated with a film and multiple kinds of glass, so it can stretch without shattering. Other materials, like polycarbonate, are sometimes used, though visibility is not usually quite as good as regular glass.

Tornado-proof glass isn’t a prohibitively expensive retrofit, unlike many of these other improvements. But we have to go back to what FEMA recommends as the safest option: an aftermarket safe room.