The Tag That Could Save Sharks

Shark behavior is one of the great mysteries of the ocean, and mediocre tags are primarily to blame. Scientists can’t... 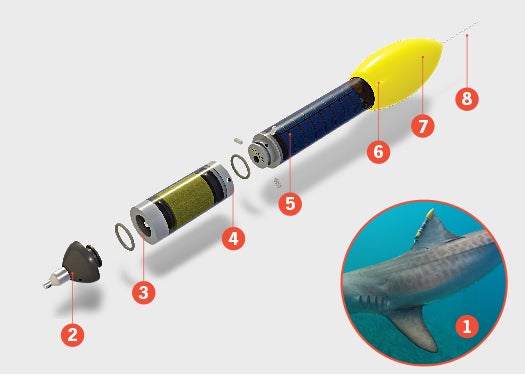 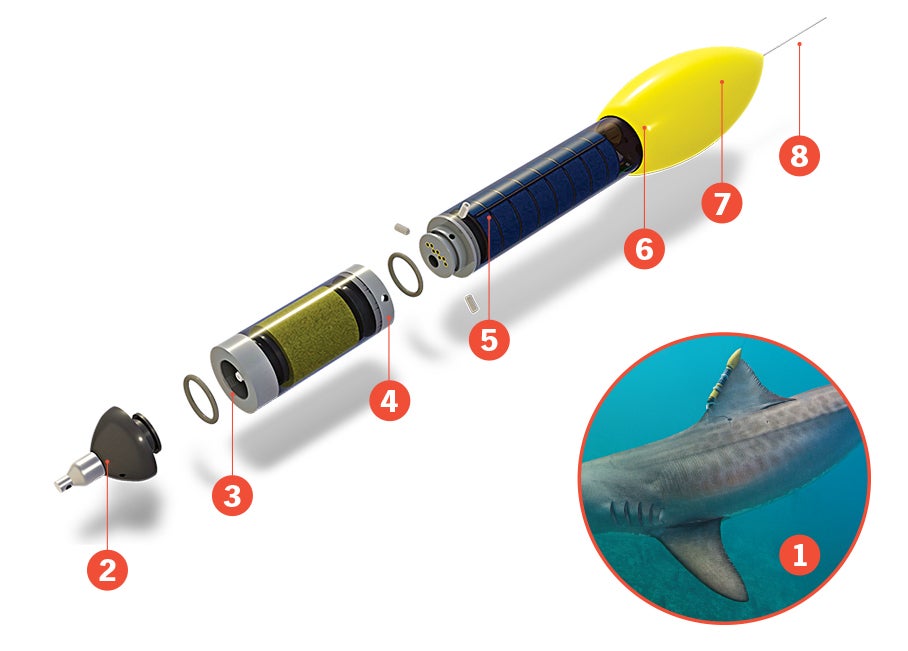 Shark behavior is one of the great mysteries of the ocean, and mediocre tags are primarily to blame. Scientists can’t understand something they can’t measure. Compared with other marine-animal tags, the HammerTag, now in prototype, is cheaper by hundreds of dollars, lasts years longer, and stores up to a thousand times more data. It can record a shark’s entire life, and when the shark dies, it will detach—via explosive charge—and float to the surface to make a final data dump.

Scientists attach the tag to the shark in two ways. On smaller sharks, they use a small lance. On larger ones, they drill three small holes in the dorsal fin and string a nylon cord through them.

The nose cone connects the tag to the shark. It remains attached to the shark even after the micro-charge blows.

When the device senses that a shark has stopped moving, meaning it’s dead, it triggers a micro-charge to fire. The charge separates the bulk of the tag from the nose cone, freeing it to float to the surface, where it can transmit data.

Constructed as a modular unit, the payload contains a backup battery, temperature sensor, and three-axis accelerometer that can determine whether the shark is resting or in pursuit.

The tag’s photovoltaic cells can collect energy at two times the distance of vertical visibility, so 100 feet at 50 feet of vertical visibility. Near the surface it can charge the battery in 20 minutes. A magnetometer determines a shark’s north-south position depending on the strength of the magnetic field. GPS does not work underwater.

A head made from syntactic foam will float a tag to the surface once it detaches from the shark.

Nested in the foam head, a pressure sensor relays depth information to the central processor.

Providing the shark is near the surface, the ARGOS satellite antenna can transmit up to 120 32-byte packets a day, enough to convey moment-by-moment details or a single-day summary.