How It Works: Masdar’s Beam Down Optical Tower

An experiment in concentrated solar power 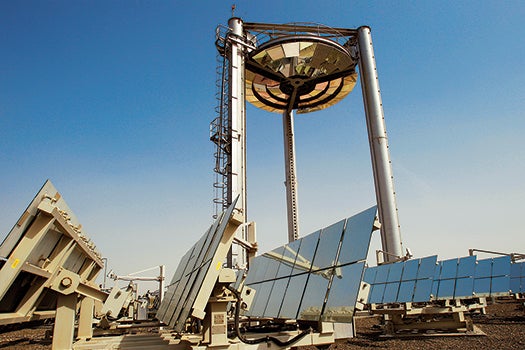 The Beam Down Tower at Masdar is a step forward in concentrated solar power (CSP). Unlike other plants, the system reflects sunlight twice, once from the heliostats to the central tower and once from the tower down to a collection platform at the system’s base. Because scientists can focus the sunlight at a very small area, they can achieve great heat. They recently concentrated solar energy to 1,100 degrees. The plant is currently only 100 kW, but designers say it could scale up easily.

Concentrate the Sun
Thirty-three heliostats—mirrors arranged in the shape of a parabola—circle the 66-foot tower in three concentric rings. Motors adjust the elevation and angle of the heliostats throughout the day to track the sun and direct the reflected light toward the underside of the tower.

Beam It down
An array of 45 mirrors made to reflect as much solar radiation as possible, also arranged in concentric circles, lines the underside of the central tower. Each ring corresponds to a specific ring of heliostats. When the reflected sun from the heliostats reaches the tower array, the mirrors redirect the light down toward the base of the tower.

Generate power
A ceramic receiver at the base of the tower absorbs the radiation. Researchers at the Masdar Institute measure only radiation at their plant, but in commercial models—like Planta Solar 10 in Spain—the radiation heats a tank filled with molten salt, air, or water. The medium then heats water to produce steam and drive a turbine.