FYI: How Do Mosquitoes Survive Rainstorms?

Raindrops are to mosquitoes what falling VW Beetles would be to humans. Yet incredibly--maddeningly--mosquitoes survive rainstorms all the time. How? 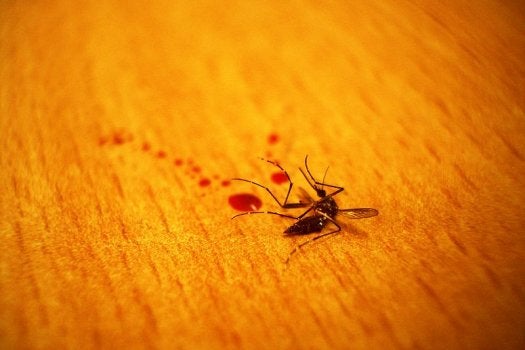 Imagine you are walking through a park and suddenly thousands of Volkswagen Beetles start falling from the sky. They are falling at a speed that is five times as fast as you can run, so dodging them is not an option. Game over for you, right? Not if you’re a mosquito. Sure, a raindrop is to the pesky insect what a Volkswagen would be to us, but mosquitoes have some natural advantages in this scenario that humans don’t.

The secret to a mosquito’s survival during a rainstorm isn’t due to any fancy maneuvers or midair acrobatics. It is a combination of their low mass, hydrophobic wings, and go-with-the-flow mentality, according to David Hu, assistant professor of mechanical engineering at the Georgia Institute of Technology. Hu has researched mosquitoes’ flight behavior in rainy conditions to better understand the limits of micro-airborne vehicles (MAVs). These tiny robot airplanes can be as small as an insect, so understanding how mosquitoes survive collisions with raindrops can help scientist develop more reliable MAVs.

Understanding how mosquitoes survive collisions with raindrops can help scientist develop more reliable MAVs.”There is still a question of how to build these things and once you build them what their limits are,” Hu says. A mosquito can provide some solutions to these limits—providing ideas for how MAVs can be better adapted to in-air collisions.

A raindrop falls from the sky at about 10 miles per hour. When it hits a solid surface at this speed, it rapidly decelerates by 100 percent and generates a force that is about 10,000 times the weight of a mosquito—enough to kill it, Hu says.

But a mosquito is very lightweight, so a raindrop only decelerates by 2 to 20 percent when it collides with the insect in midair, creating a force of about 50 to 300 mosquito weights—still a significant force, but because of the mosquito’s extremely strong exoskeleton, not enough to kill on impact, Hu says. “It is like you take a down feather out of your jacket and put it right on top of the mosquito,” Hu says.

It’s easy to imagine that a swipe of a feather won’t harm a mosquito, but how does a mosquito handle the force of a raindrop? One of two things happens: If the raindrop hits the mosquito’s legs or wings, the mosquito gets knocked off balance and spins in the air as the raindrop slips off of its water resistant extremities. The mosquito recalibrates and is back on track in about one-hundredth of a second.

The mosquito is back on track in about one-hundredth of a second. If a raindrop directly hits a mosquito’s body, the impact is much greater. Instead of spinning in midair, the raindrop grabs hold of the mosquito, rapidly accelerating it downward. It’s like walking down the street, then a bus going 10,000 miles per hour hits you and carries you along with it.

The mosquito hitches a ride on the raindrop at super speed for about 5 to 10 centimeters and then it does something unexpected—it peels away from the raindrop and continues on its flight path.

This process would be like if that unfortunate guy who got hit by the bus happened to be covered in newspapers, Hu says. As he and the bus collide, his newspaper limbs begin to flap in the wind. Because the mosquito’s long legs and wings extend past the perimeter of the drop, they generate wind and torques that free the mosquito, Hu says.

Mosquitoes are the ultimate tai chi masters: they don’t resist the force. Throughout all this turmoil, you’d think the mosquitoes would alter their behavior to avoid raindrops. Yeah, they can survive the impact forces, but it can’t be comfortable to hurtle toward the earth on the back of speeding raindrops. You’d be wrong.

“I call the mosquitoes the ultimate tai chi masters because they don’t resist the force at all,” Hu says. Instead, the mosquito just goes along for the ride despite the jet-speed acceleration.

But this carefree attitude may work against the mosquitoes when they are flying too close to the ground. If the mosquito is 10 centimeters or fewer from the ground and gets a direct body hit from a raindrop, it doesn’t have enough time to peel off. Instead, it gets smashed into the ground. Game over for the tai chi master.