How It Works: Honeybee Society

A beehive buzzes with thousands of genetically similar female honeybees. Some nurse their queen and her eggs while others fly... 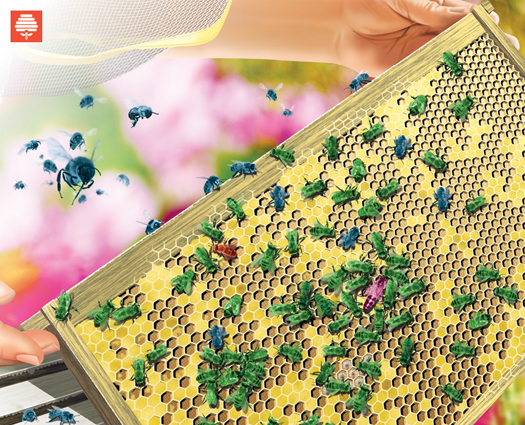 A beehive buzzes with thousands of genetically similar female honeybees. Some nurse their queen and her eggs while others fly out in search of pollen and nectar. For decades, scientists knew that bees took on new jobs as they aged, but a team of researchers recently discovered that chemical tags attached to the bees’ DNA play an important role in determining their career paths.

The tags, which are frequently methyl groups, control gene expression, which in turn affects how an organism behaves. Both the chemical tags and the behavior they induce appear to be reversible, says Arizona State University biologist Gro Amdam. Foraging bees, for instance, could become nurses if the hive requires it. Humans also carry epigenetic tags that may affect their behavior. Scientists found methyl groups attached to a stress-hormone-receptor gene in child-abuse victims who committed suicide. If these chemical cues can be changed in bees, scientists may find new treatments for people with psychological trauma, mood disorders, and learning disabilities too.

Flowering Season
To exploit the increase in available food, young bees that would normally become nurses immediately develop into foragers, a switch reflected by changes in their epigenetic tags.

Base Population
An average hive has 10,000 to 50,000 workers. At any given time, foragers account for about 30 percent of the workforce, but that proportion can change depending on environmental factors.

Swarming Effect
When a queen gets old, she flees the hive with a swarm of mostly nurse bees, leaving the colony and its larvae to her successor. Some foragers and free-agent bees will then shift to nursing. In a lab experiment, after half of a hive’s population was taken away, only 10 percent of foragers became nurses. Scientists say that fragility may keep many foragers from making the switch. Foragers are programmed to be frail in order to protect the colony: Rather than bring infections or toxins back to the hive, they typically die out in the field. 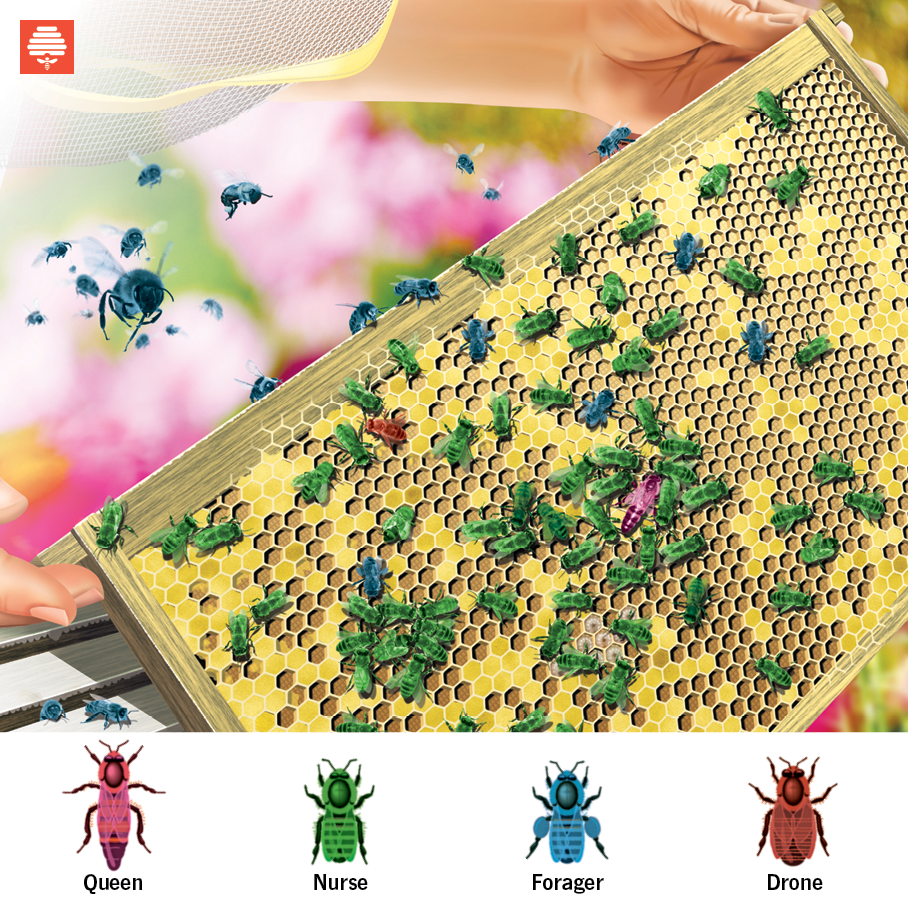 Workforce In The Hive

Queen
When a colony’s queen grows old or infirm, nurse bees secrete a royal jelly high in fatty acids and protein and feed it to a few larvae. The diet encourages ovaries to develop and produces a new queen who will spend her days laying thousands of genetically similar eggs.

Nurse
Most female bees begin their lives as nurses who care for the queen and larvae. They clean wax cells for the queen’s eggs and feed the larvae honey and pollen.

Forager
When most nurse bees turn two to three weeks old, the gene expression in their brains changes, and they switch to foraging for pollen, nectar, and water outside the hive using the sun as their compass. However, scientists have discovered this job change is flexible: Workers of any age can nurse or forage.

Drone
Male honeybees, which carry only one set of chromosomes, fertilize the queen’s eggs.

A nurse bee starts with a few DNA tags [1]. More tags turn it into a forager [2]. Tag removal reverts the bee to a nurse role [3]. 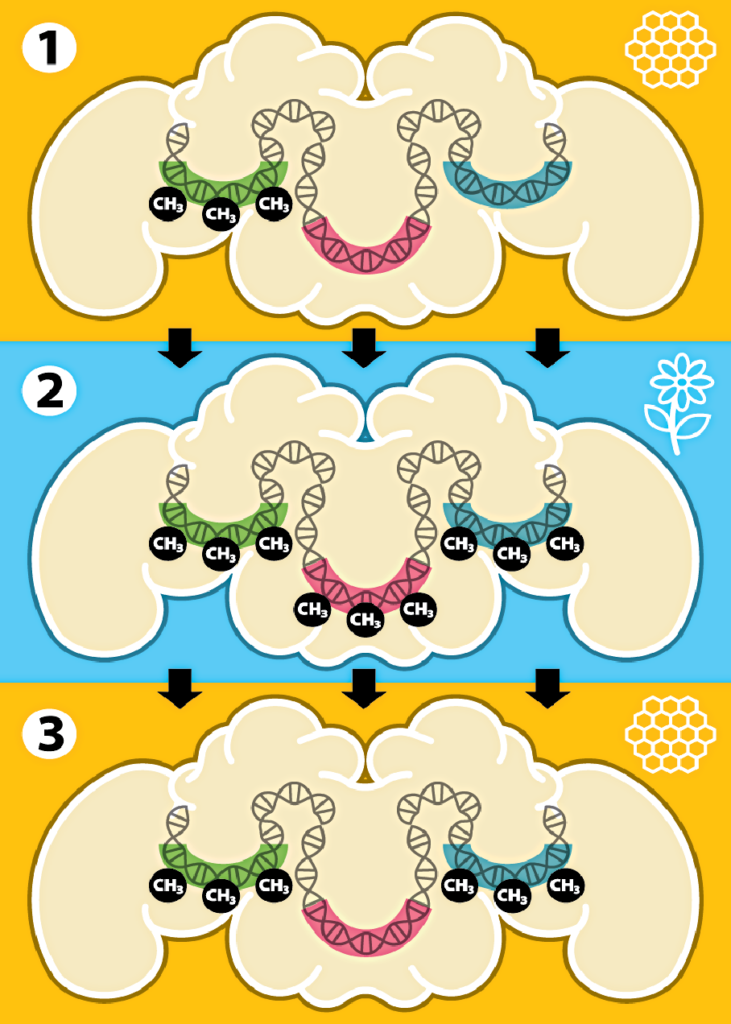 Tags: Enzymes such as methyltransferase help transfer epigenetic tags to DNA. The mechanism for inducing epigenetic changes in bees is not well understood, but scientists suspect that pheromones exuded by the forager bees might play a role.

Proteins: The tags also dictate how pieces of genes are assembled into an mRNA transcript, which eventually determines the type of protein made from that gene. A protein produced in a nurse bee will look different and serve a different function than one produced in a forager.