Why Do Cicadas Invade In Such Crazy Numbers?

The explanation for the infestation. 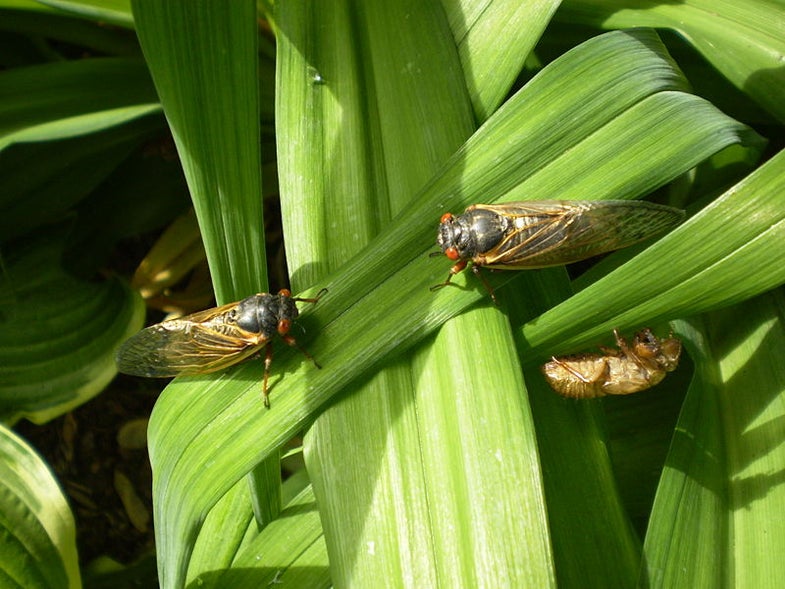 Magicicada is a plague unlike any other, here in the northeast. And it is a plague with a reason: emerging in absurd, over-the-top, biblical numbers is the cicada’s bizarre–but effective–means of survival.

The Magicicada, the genus of cicada that’s about to blanket the northeast United States, is a very odd creature. It is, in the animal kingdom, a very tasty treat, which is unfortunate for the cicada, but not so odd. What’s odd is that it has literally no protection against getting eaten: it has a mouth but it does not bite, nor does it sting nor pierce nor scratch. It is colored a shiny black, with luminous yellow/orange wings and absurdly bright crimson eyes, which do not give it any camouflage whatsoever.

Once molted into its adult form, it does not eat or move very much. It does, however, draw attention to itself by making a godawful racket, all the time. “They’re not great fliers,” says Cole Gilbert, a professor of entomology at Cornell University. “They don’t fly much more than a couple hundred meters.” The cicada sits there on a tree and makes noise to attract a mate, while looking shiny and obvious and defenseless and delicious.

It is an idiot bug.

Literally every insectivorous animal in the northeast–songbirds, carnivorous birds (hawks, owls), opossums, foxes, cats, shrews, snakes, spiders, and even dogs–will gorge on cicadas. Billions of them will be eaten during the one summer when this brood–Brood II–emerges from the ground. Billions.

This is a strategy called predator satiation. It’s contrary to the survival strategies of almost every other animal: it intends for a huge percentage of its population to be eaten. It doesn’t care. The idea is to overwhelm predators with numbers, since the predators can only eat so many. The only other species that practices predator satiation in the US is the salmon.

Gilbert estimates that anywhere from 15 to 40 percent of this brood will be eaten, but the density of Brood II is massive. There could be up to 1.5 million cicadas per acre, so even a loss of 40 percent leaves, well, probably still a couple billion cicadas from this brood alone. That said, 1.5 million per acre is very high; many areas won’t have one percent that many. Gilbert estimates that the brood will need between 3,000 and 4,000 cicadas per acre “to swamp the predators.” So each acre will need significantly more cicadas than that to survive to breed in that area again.

The Magicicada attack is an unusual event in the northeastern ecosystem; there are very few events in the lives of flora or fauna that occur so rarely and yet so regularly. So the ecosystem doesn’t depend on the cicadas, the same way some animals may rely on certain seasonal fruits or the migrations of pollinating animals. Instead, the cicadas serve as a kind of bonus or treat. Red-wing blackbirds and eastern bluebirds have been found to have much stronger and healthier broods in years that coincide with Magicicada‘s emergence, as do mammals like foxes and raccoons. But one of the more surprising beneficiaries are the trees.

When cicadas lay eggs, they use their proboscis to cut little slits in thin branches and lay eggs in there. When the larvae hatch, they simply plop down onto the ground, bury themselves, and attach to the root system of the tree, where they’ll remain for another 17 years, unseen. We’re not really sure how they count to 17; there is a gene that differentiates the 17-year cicadas from the 13-year cicadas, but, says Gilbert, “we don’t really have any way to see what the hell they’re doing down there for 17 years.” Occasionally, if too many cicadas make these slits in branches, the branch can break and droop. Entomologists call this “flagging,” because, cut off from the rest of the tree, the leaves on the broken branch will turn brown, making them rather obvious amidst the otherwise green leaves. And the last year of the cicadas’ lives underground is a bit harder on the tree, since the cicada larvae are eating more and more tree juices from the roots to get ready for their brief adulthood. But this is very minimal damage, and the cicadas repay the trees.

Cicadas molt when they emerge from the ground, leaving behind a chitin exoskeleton clinging to trees. That exoskeleton is very rich in nitrogen, and when it eventually falls to the ground, it decomposes and provides much-appreciated food for the (very slightly) weakened tree. The bodies of the adult cicadas, too, if they’re not eaten, decompose in huge numbers, making the soil from the year after a Magicicada emergence incredibly rich and fertile.