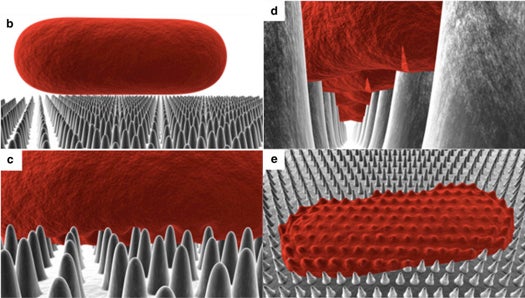 Cicadas are best known here in North America for only emerging from deep underground in huge swaths once every 17 years, but periodical cicadas aren’t the only unusual insect in their family. One species, the Clanger cicada, has a way cooler claim to fame: Their clear wings are equipped with nanoscale spikes that stretch and deflate bacteria with “extreme efficiency,” according to a new study in Biophysical Journal.

The researchers say this is the first biomaterial found to destroy bacteria purely with its physical structure, rather with some kind of biological interaction.

To test how the cicada’s defense mechanism worked, the researchers microwaved bacteria to change the elasticity of their membranes. Bacteria cells with more rigid structures were able to withstand the cicada’s bactericidal wings, but once their surface structure was softened by the microwave exposure, the nanopillars stretched and impaled the cell until it ruptured and the bacteria died.

The nanopillars found on the cicada’s wings aren’t needle sharp, and don’t immediately puncture the bacteria. Instead, they slowly stretch the cell membrane like a balloon until it starts to tear, making it only an effective defense against bacteria with suitably elastic surfaces. In the animated model, it looks kind of like what would happen if you pressed a Tempur-Pedic pillow onto a bed of nails.

A bio-inspired material based on the cicada wing’s structure could be used to create anti-bacterial surfaces for medical applications, or perhaps even to de-gunk public surfaces we put our grubby hands on daily, without the use of harsh chemicals. As one chemical engineer suggested to Nature.com, it could be used to destroy bacteria on bus railings. Who needs hand sanitizer when you can have a medieval torture device for bacteria?