Pass The Prozac: Fruit Flies Get Depressed, Too

The discovery of depression-like behavior in insects shows depression has deep roots in the animal kingdom. 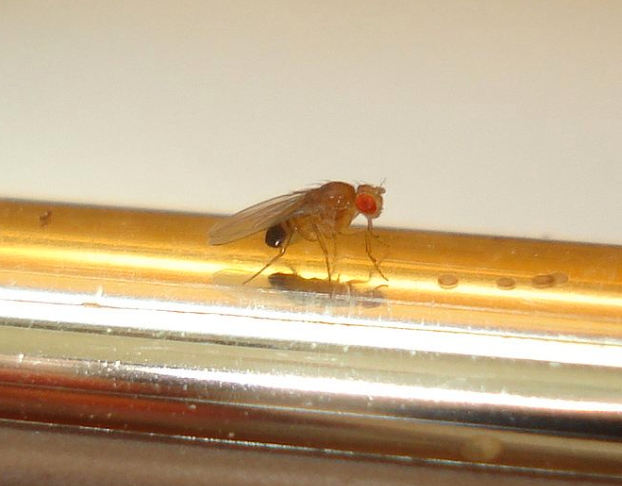 Depressed animals, including humans, develop several physical symptoms related to their feelings of helplessness or despair. Now it turns out something similar happens in flies, which could mean researchers may have a new way to test depression and drugs that can treat it.

Fruit flies are already useful models for neuroscientists, so this is an intriguing development. It also shows depression has a deep biological basis, according to the authors of this new study, led by Martin Heisenberg of the Rudolf Virchow Center in Würzburg, Germany. The research stemmed from a debate about whether flies can feel fear.

The researchers wanted to investigate whether flies would learn to suppress innate responses to certain behaviors. This is common in the animal kingdom; it’s called “learned helplessness,” and it’s a response characterized by sleep and eating disorders, reduced immune activity and increased serotonin levels. When animals feel harassed, stressed or otherwise helpless, they may respond with these symptoms that are characteristic of depression. Rats harassed with a robot exhibit these symptoms. In other studies, slugs, cockroaches, fish and many other fauna developed a helplessness response when they were tortured with electric shocks. In these setups, a “master” animal can control the shocks by its behavior, while a “yoked” one can’t do anything about it.

To test this further, Heisenberg’s team put flies under duress by heating them up. Master flies could reduce the heat by walking around. Yoked flies could not control the heat. Eventually, the yoked flies would realize–for lack of a better word–that the heat is beyond their control, so they would stop responding to it, walking slowly and taking longer and more frequent rests. The team considered this “depressed” behavior.

“This behavioral state consists of a cognitive and a modulatory, possibly mood-like, component,” they write. “Evidently, the behavior described here is not a disease or
trauma. The fly copes with a stressful situation for which it has no ready-made answer in its behavioral repertoire.”

They noticed that female flies slowed down more than males did, but Heisenberg was uncertain about why.

“If we realize that the fly trapped in a strange, dark box, unable to get rid of the dangerous heat pulses, has to find a compromise between saving energy and not missing any chance of escape, we can understand that such a compromise may come out differently for males and females, as their resources and goals in life are different,” he said in a statement.

To follow up, the team now plans to test how this depression-like state affects other fly behaviors, and what is taking place in their tiny brains. The research is published in Current Biology.