How Do Researchers Feed Thousands Of Bloodthirsty Bed Bugs?

A sanguinary luncheon for laboratory insects 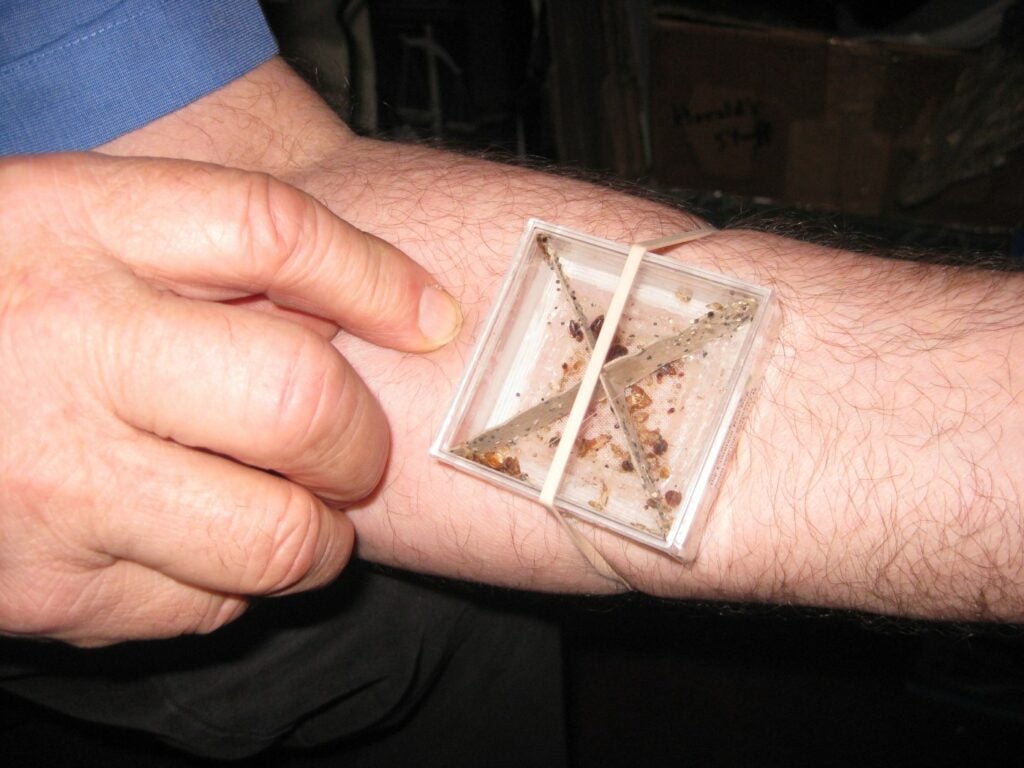 An entomologist feeding bed bugs on his forearm.

When the common bed bug staged its comeback over a decade ago, scientists hadn’t really studied the insect for about forty years. Once it was clear bed bugs weren’t going away, researchers who wanted to learn how to thwart them first had to figure out how to keep thousands–or hundreds of thousands–alive in the lab. The first trick was to feed them. Bed bugs eat just one thing: blood.

But what kind of blood would work? And how to serve it?

It took a year or two for most labs to successfully raise enough bed bugs to run their experiments, and now they are able to test everything from basic behavior to pesticide efficacy. Here’s how they did it in five not-so-simple steps.

Bed bugs specialize on human blood, although they’ll bite other animals if given the chance. So, the easiest way to feed them is to offer an au naturel meal. Some researchers with small populations simply roll up their sleeves or pant legs and strap a container of bed bugs on, letting them feed through a layer of fine mesh that prevents escape.

Those looking to avoid lengthy IRB approval, or who are housing hundreds of thousands of bugs and just don’t have enough arms and legs to go around, purchase animal blood that is more typically used in medical research. Most labs have tried everything from dog to rabbit to chicken blood, with varying success. To make it more palatable, it is often defibrinated, which involves removing a clotting protein called fibrin. 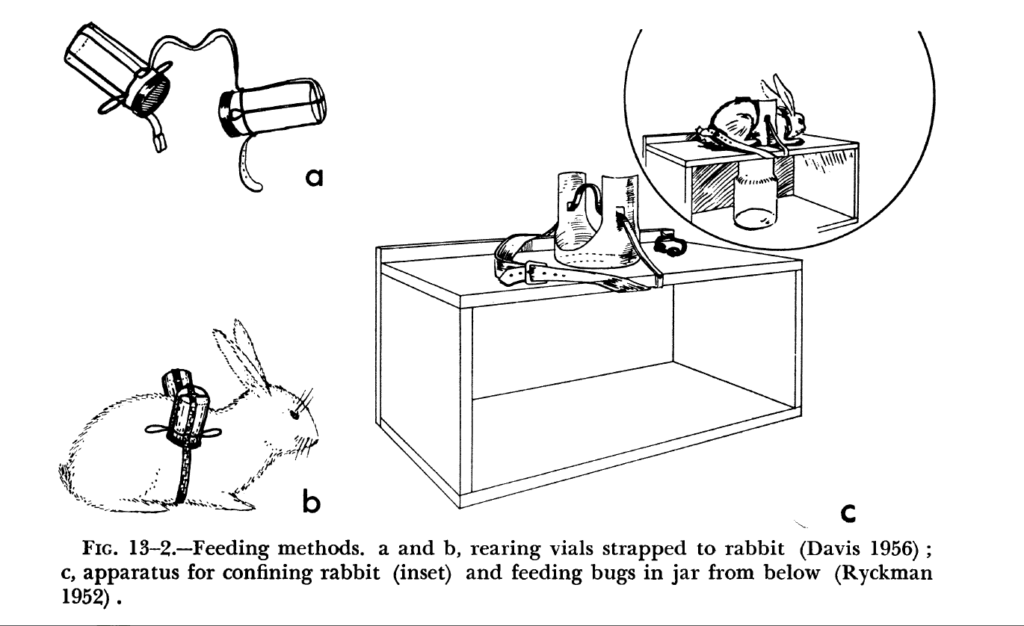 In the 1950s, researchers sometimes fed bed bugs directly on rabbits and other animals. Today, the bugs are usually fed animal blood through artificial feeders.

Where to put all this tasty defibrinated blood? In an artificial bed bug feeder, of course. Options for these run from expensive ready-made devices to crafty DIY projects. The former were originally designed to nourish mosquitoes and other blood-feeding insects, such as the Hemotek system, which costs several thousand dollars. Entomologists at the Ohio State University have adapted this set-up for bed bugs. The researchers turn six self-heating feeders sideways and then press bed-bug-filled Petri dishes with small screen-covered openings against them. This allows the bed bugs to feed while preventing blood leakage. 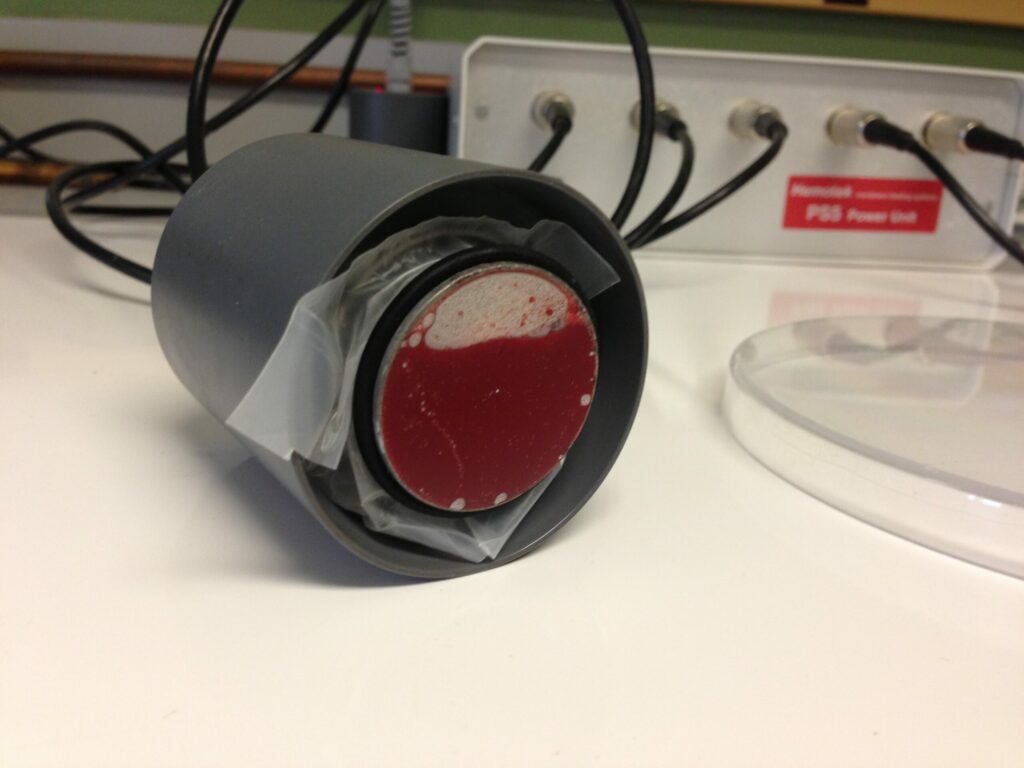 A Hemotek feeder loaded with defibrinated rabbit blood at OSU.

North Carolina State University entomologists use custom glass feeders designed with internal jackets to allow warm water to circulate around the blood to heat it without diluting it. The researchers place plastic bed bug containers with nylon screen tops on lab jacks and raise them up to individual feeders. Blood cells settle to the bottom of the container, so this makes them more accessible to the bugs. 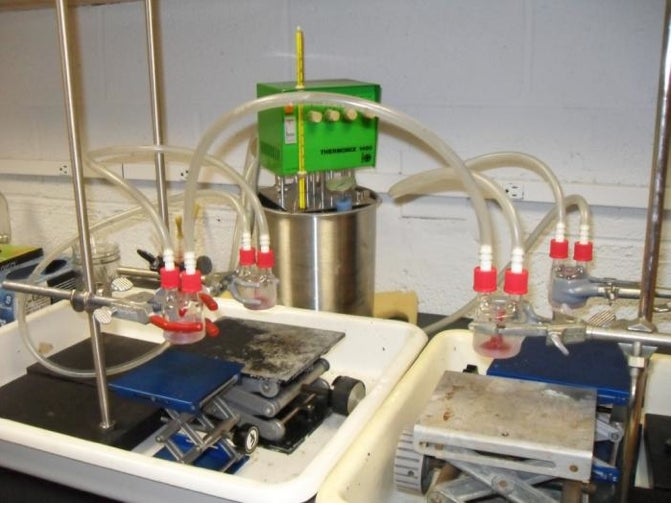 Other feeders are far simpler. Bed bug experts at the University of Sheffield in the U.K. sandwich a few CDs together, seal the sides, and then fill the space inside with blood using a hypodermic needle. In order to explore bed bug behavior, the scientists place the feeder and the bed bugs in a large research arena that sits on a seven-watt aquarium heating mat to keep the blood warm.

Researchers at Sheffield University stick three compact discs together, seal the edges, and fill with blood.

Bed bugs can’t lap up pooled blood: they have to pierce skin and suck. Artificial feeders, then, require a thin layer of a material that is penetrable to the pinprick of a bed bug bite, but that doesn’t leak. For this purpose, researchers seal their feeders with everything from permeable film to silicon liquid applied to thin mesh to condoms. 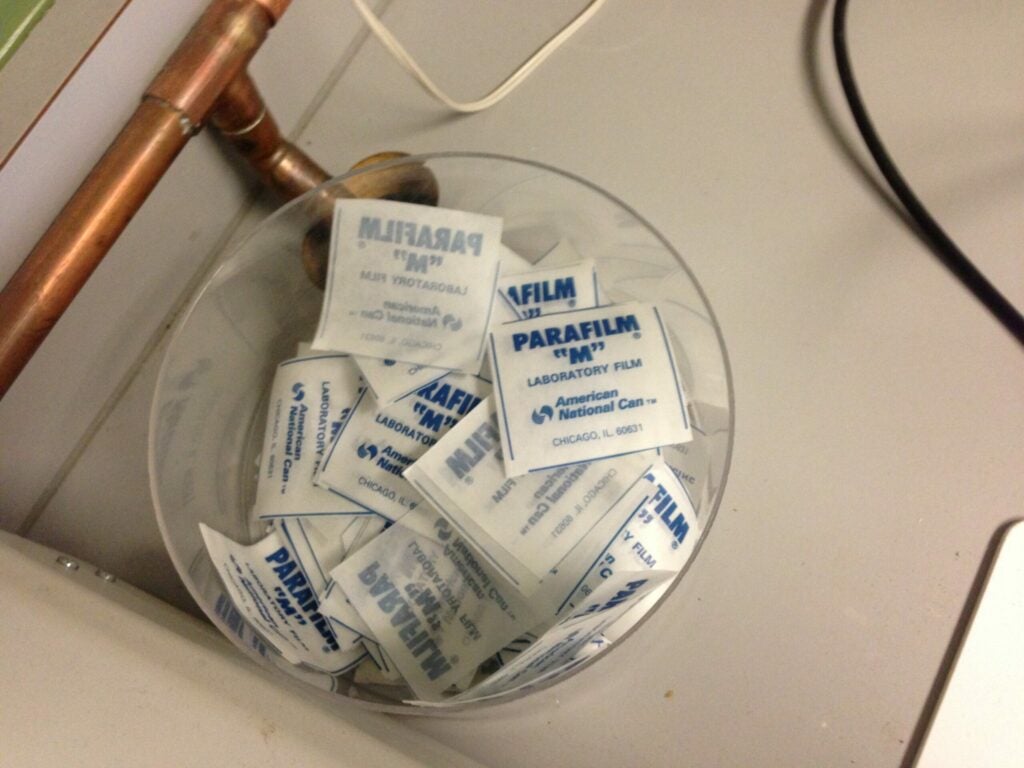 Some researchers use parafilm to mimic skin in an artificial bed bug feeder.

Step 4: Get them hungry

Bed bugs find a host by picking up on exhaled carbon dioxide and body heat. In addition to the heat sources used for each artificial feeder, which bring the blood roughly to human body temperature, researchers sometimes blow on a bed bug container pre-feeding, which acts as a dinner bell.

Feeding bed bugs can be a full time job, and labs employ technicians whose main task is to feed and raise the bugs. Some researchers test new batches of blood on a few bed bugs before feeding their entire population to make sure the blood is safe. In at least two cases, a batch of chicken blood tainted with an insecticide-a preventative mite treatment sprayed on the live birds-killed off hundreds of bed bugs intended for research. 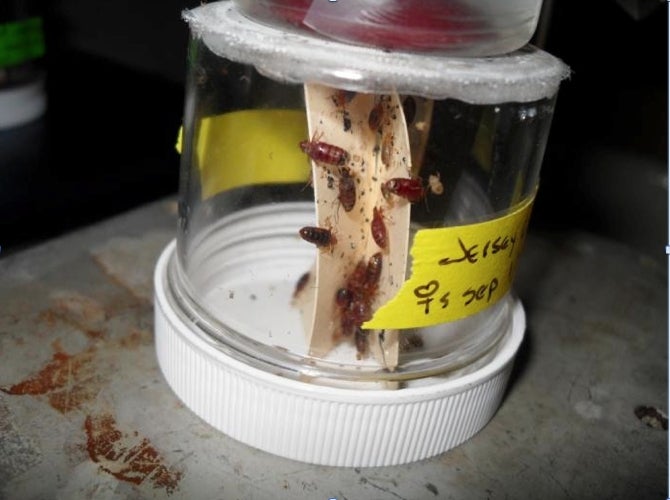 Bed bugs climb up to feed from an artificial feeder.

Brooke Borel is a contributing editor at Popular Science and is writing a book about bed bugs for the University of Chicago Press. Follow her on Twitter @brookeborel.