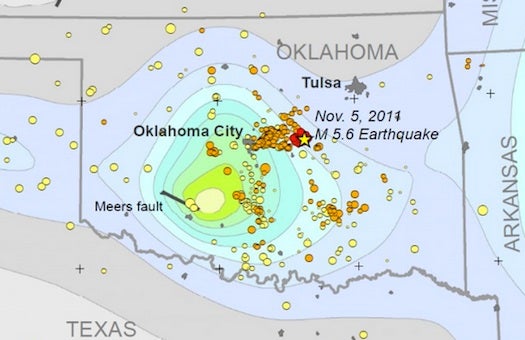 In 2011, a series of earthquakes hit central Oklahoma, destroying six houses, damaging an additional 14, and bringing down a turret at the 700-student St. Gregory’s University. Among the series was the largest earthquake ever recorded in the state of Oklahoma. And, some scientists say, the quakes may have included the largest earthquake ever triggered by the injection of wastewater from oil and gas drilling deep inside the Earth.

A team of U.S. geologists has published a paper in Geology that argues that wastewater injection triggered the magnitude 5.0 earthquake near Prague (pronounced with a long A), Oklahoma, on November 5, 2011. That quake then broke fault planes to the south, triggering more than 1,000 aftershocks, including a 5.7 quake November 6 and a 5.0 on November 8. “I think this should raise awareness for the potential for larger events that could be induced,” Elizabeth Cochran, a geophysicist from the U.S. Geological Survey in California and one of the authors of the new paper, tells Popular Science.

The Oklahoma Geological Survey disagrees. The agency posted a statement on its website three days before the Geology publication, laying out its arguments for why survey scientists think those earthquakes were natural.

Meanwhile, the U.S. Geological Survey says evidence is mounting that the American Midwest and East have seen increasing seismic activity since 2009, alongside increased wastewater injection. The increased quakes are generally small, of magnitude 3, which don’t cause damage but which people can feel. Cochran tells Popular Science that her team’s findings of larger induced quakes call for increased monitoring of areas where drilling occurs. However, there are no federal or state laws requiring companies to assess an area for earthquake potential before injections–nor to hold companies liable for earthquakes that occur afterward.

Illustration of an oil and gas wastewater injection well

The practice of wastewater injection has proliferated over the past 60 years in the U.S. because it is a relatively inexpensive, swift way to get rid of oil and gas drilling waste, ProPublica reported last September. There are about 144,000 such wells in the United States. They’re classified in such a way that they’re under less stringent regulation than waste wells from the pharmaceutical, chemical or other industries. The ProPublica report mainly pointed to the wells’ potential to contaminate nearby water supplies, but recent geological studies suggest that earthquake potential could also be a greater problem than previously thought.

Geologists have agreed-upon criteria for deciding whether an earthquake was triggered by human activity. One of these criteria is proximity, and the Prague earthquakes fit the bill. The first quake occurred about 200 meters, or little more than a tenth of a mile, away from an active injection well.

Another indicator of triggering is if a quake occurs soon after some drilling activity, sometimes within 24 hours. The Prague quakes don’t fit that second category, as wastewater injection began in the area decades ago, in 1955. Cochran and her team argue, however, that the quakes began now because the pumping pressure increased recently. Jean-Philippe Avouac, a geologist at the California Institute of Technology who was not involved in the paper, found their argument convincing. “They have a reasonable explanation for this delay,” he tells Popular Science.

On the other hand, the Oklahoma Geological Survey argues that pumping pressure increased too long ago, in 2004. The survey also argues that a naturally induced 5.7 quake wouldn’t be unheard of for the area, even if it is generally more seismically stable than, say, California.

The Oklahoma Geological Survey has previously determined earthquakes were human-caused. Earlier in 2011, Holland determined that quakes of magnitude 1.0 to 2.8 in south central Oklahoma were triggered by the injection of fluid into the Earth for hydraulic fracturing. After two injecting sessions, however, the drilling company didn’t need to inject any more fluid, so it stopped.

Whether or not the Prague quakes are ultimately determined to be human-triggered, geologists such as Bill Ellsworth of the U.S. Geological Survey and the folks on Cochran’s team–including geologists from the University of Oklahoma and Columbia University–say the trend of increased earthquakes around wastewater injection wells is real. (U.S. Geological Survey studies have not linked hydraulic fracturing to the increased number of earthquakes.)

The geologists were reluctant to give their opinions on whether more regulation is warranted, however. Holland makes a cautious argument similar to what many geologists told me. “We’re not a regulatory authority and I’d be stepping on someone’s toes if I made any recommendations,” he says, “but certainly there’s room for improvement on existing regulations.” 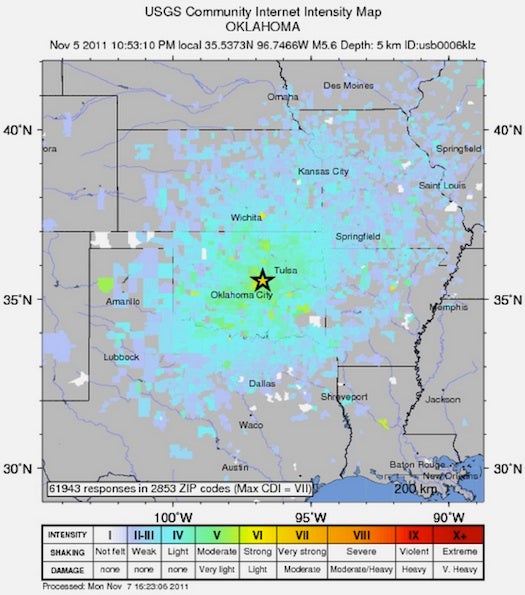 Did You Feel It?

A map of the shaking and damage that people reported to the U.S. Geological Survey’s “Did You Feel It?” website after the magnitude 5.0 earthquake near Prague, Oklahoma, on November 5.
hydraulic fracturing
wastewater injection