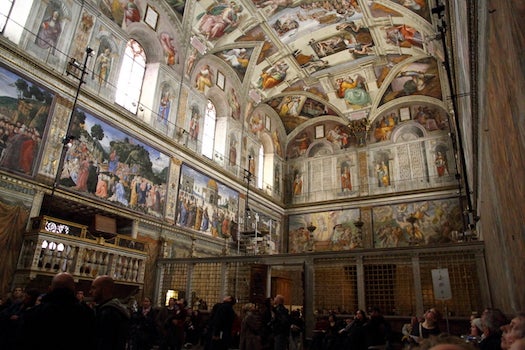 Back in 2005, before it was announced that Joseph Ratzinger would be pope, a leak helped the German media break the story. The conclave, the group of cardinals that elects the pope, will soon make another decision, and they don’t want a repeat of 2005. The answer? Bug-proof any areas where the cardinals are working, including the Sistine Chapel.

To do that, Vatican officials will be installing a Faraday cage that can block signals, while also monitoring and potentially even searching electors. The Synod Hall, where early meetings happen, has already had its wireless network disabled to ensure zero media contact. Officials are also working to remove their own bugs, installed in response to the 2012 “Vatileaks” document leak. Television, radio, and other news sources are banned unless absolutely necessary.

So, yes, this sounds more than a little Big Brother-ish, especially when papal police have been given broader powers in response to the Vatileaks scandal. Everyone preparing the area where the voting will take place has even been literally sworn to secrecy, under penalty of excommunication. But people might be looking for the scoop again, so we’ll see if this can plug the Vatican tight.