Fomalhaut B: The Mote in Sauron’s Eye

The controversial exoplanet Fomalhaut b has been spotted, and it's even stranger than we'd thought. 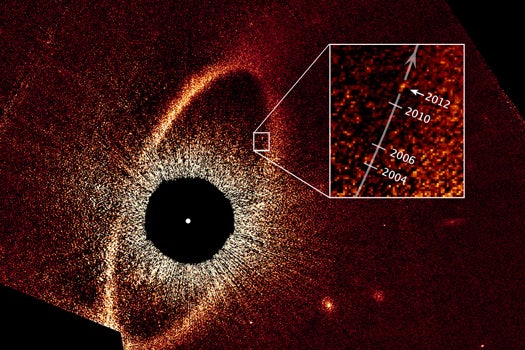 In 2008, an image taken by the Hubble Space Telescope showed the world one of the first directly imaged extrasolar planets, 25 light years away in a system resembling the all-seeing Eye of Sauron, in the giant disk of debris surrounding a young star called Fomalhaut. But the instrument used to see the purported planet, Fomalhaut b, broke in 2007, and the team involved in the discovery couldn’t replicate their results.

The next time they saw Fomalhaut b, using a different instrument, it didn’t appear to be in orbit around the star, and some scientists dismissed the exoplanet discovery. But a few months ago, other telescopes also spotted Fomalhaut b.

With new images, scientists have identified that the debris belt around Fomalhaut is wider than previously thought, 14 to 20 billion miles from the star. The original Fomalhaut team has now been able to calculate a few potential orbits for the previously maligned Fomalhaut b. It’s likely a rogue planet, moving in an unusual elliptical orbit more like a comet, but could be as big as Jupiter. It comes as close as 4.6 billion miles away from its star, then moves out to 27 billion miles away during its 2,000 year-long orbit.

The Fomalhaut team thinks the strange orbit is evidence of other planet-like objects in the system, which may have knocked Fomalhaut b onto its weird path. Another planet could have shoved Fomalhaut b from a placement closer to its star, moving its orbit out beyond the dust belt.

The dust and ice belt around the star Fomalhaut also has a gap cut through it, possibly a path forged by some other undetected planet. It’s not certain if Fomalhaut b is on the same plane as the belt and will pass through it. If Fomalhaut b’s orbit intersects the dust belt, 2032 will bring cosmic fireworks as icy and rocky debris crash into the planet’s atmosphere.

Despite the evil nickname, NASA says Fomalhaut provides a glance into what our own solar system might have been up to 4 billion years ago, as its planetary architecture is still in the process of evolving.