In The Same Cataclysm That Gave The Moon Its Craters, Lots Of Asteroids Suffered Too

During the Late Heavy Bombardment, not even space rocks were safe. This is good news for historians of the solar system. 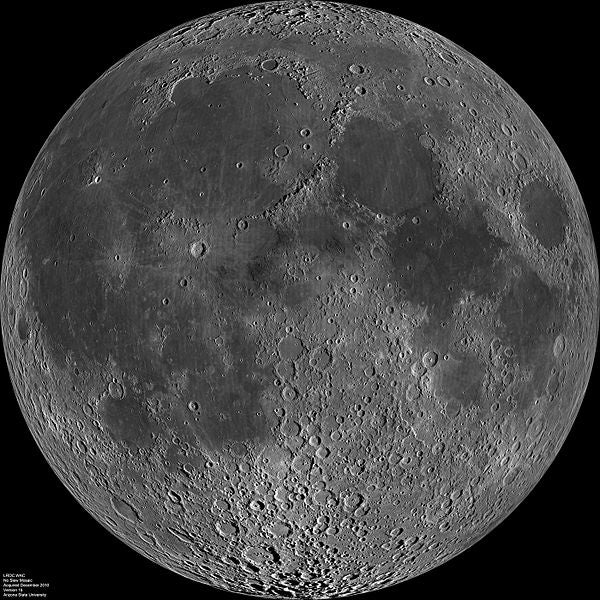 About 4 billion years ago, something caused Jupiter and the other gas giant planets to shift in their orbits, shoving countless space rocks out of their positions in the asteroid belt. Tugged inward by the sun, these asteroids migrated toward Earth and the moon, ultimately bombarding our young planet and its satellite.

In a cataclysmic shower of destruction, Earth, Mars, Venus and Mercury suffered gigantic impact craters, though on our planet much of the evidence was lost to time and tectonics. The moon, however, still bears the scars of this period, known as the Late Heavy Bombardment or lunar cataclysm. And so does the giant asteroid known as Vesta.

Vesta, which was visited by a NASA spacecraft last year, suffered the same high-speed impacts as the moon and the terrestrial planets, according to new research. This points to a common history for the rocky worlds and larger non-world rocks. That’s interesting because it gives scientists a new way to study this early period of our solar system. Before now, the only way to study this bombardment was with Apollo moon rocks.

By studying chunks that fall to Earth as meteorites, scientists have recently been able to figure out the ages of main belt asteroids, which gives a glimpse of their history. Certain meteorites called howardites and eucrites have also been used for comparative studies of Vesta, which is their parent body. Vesta is the second-biggest asteroid in our solar system and is technically considered a minor planet, with a diameter of 326 miles. It lives in the asteroid belt.

In a new study, scientists from NASA’s Lunar Science Institute analyzed the howardites and eucrites, plus new data from the Dawn spacecraft, which orbited Vesta for a while last year. Crunching many numbers and computer simulations, the team determined the population of objects that hit Vesta also hit the moon during the lunar cataclysm.

“Although the moon is located far from Vesta, which is in the main asteroid belt between the orbits of Mars and Jupiter, they seem to share some of the same bombardment history,” said Yvonne Pendleton, NLSI director.

This helps bolster the theory that the gassy planet repositioning is what triggered the bombardment. It also shows that the cataclysm affected many objects beyond our planet. And maybe best of all, it means scientists can study that tumultuous time in new ways: With the howardites and eucrites delivered from Vesta to us. The new research is published in Nature Geoscience. 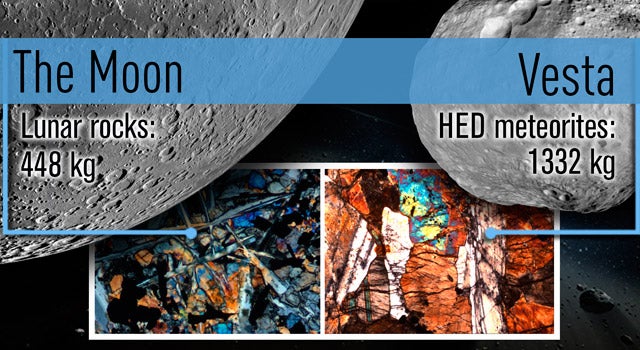 Scientists have discovered that studying meteorites from the giant asteroid Vesta helps scientists understand the event known as the “Lunar Cataclysm,” when a repositioning of the gas giant planets destabilized a portion of the asteroid belt and triggered a solar-system-wide bombardment. Previously, scientists had only lunar samples to work with.   The left-hand mosaic of the far side of the moon is based on data from NASA’s Lunar Reconnaissance Orbiter. On the right is an image of the giant asteroid Vesta from data obtained by NASA’s Dawn spacecraft. The insets show thin sections of the lunar sample 10069-13 and eucrite NWA1978.
Moons
Solar System
Space