Birth of Youngest Planet Ever Seen Is Witnessed With Telescopic Trick

Astronomers have captured the first direct image of a newly forming planet orbiting around its star, using mirrors to blot...

Astronomers have captured the first direct image of a newly forming planet orbiting around its star, using mirrors to blot out the star’s blinding light. The LkCa 15 system contains a hot, coalescing world sitting in a gap between the star and an outer disk of dust, exactly in accord with most theories of how planets are born.

The discovery is a triumph for exoplanet hunters and for unique telescope techniques, as researchers combined adaptive optics with a light-masking method to block starlight. Previously, planetary formation has been impossible to see directly, because it happens very close to the star and the disk is washed out.

Adam Kraus of the University of Hawaii and Michael Ireland from Macquarie University and the Australian Astronomical Observatory worked with the twin 10-meter Keck telescopes on Mauna Kea in Hawaii, scanning 150 stars containing protoplanetary disks. LkCa 15 was only their second target, but they knew pretty quickly it was a good one, according to a news release from the W.M. Keck Observatory.

Working with the Keck telescopes’ deformable mirrors, which adjust many times per second to reduce atmospheric interference, the two used a star-blocking method called aperture mask interferometry. This involves placing a small mask with several holes in it directly in the path of the incoming light, allowing it to be further manipulated. Distant stars can then be blotted out, allowing astronomers to see the gas and dust surrounding them. In the image at the top of the page, the little star shape denotes the star’s location, blocked out by this mirror manipulation.

The image is taken in infrared light. The blue region denotes the nascent planet, LkCa 15 b, which is a super-Jupiter about six times more massive than our solar system’s largest planet. The red areas denote warmer material that is accreting onto the planet. The donut hole represents a cleared area, where LkCa 15 b hoovered up the dust and gas around itself.

Exoplanet hunting requires first finding a star with good potential for a solar system, and then trying to see beyond the star’s glow for evidence of other bodies. The Kepler space telescope does this by spotting blips in their stars’ brightness as the worlds circle around them. But the nebulous disks of a neonatal system can’t be inferred in this way, which is why Kraus and Ireland blocked out the star itself.

The astronomers describe their finding in a paper posted to the arXiv preprint server and recently accepted for publication in the Astrophysical Journal. 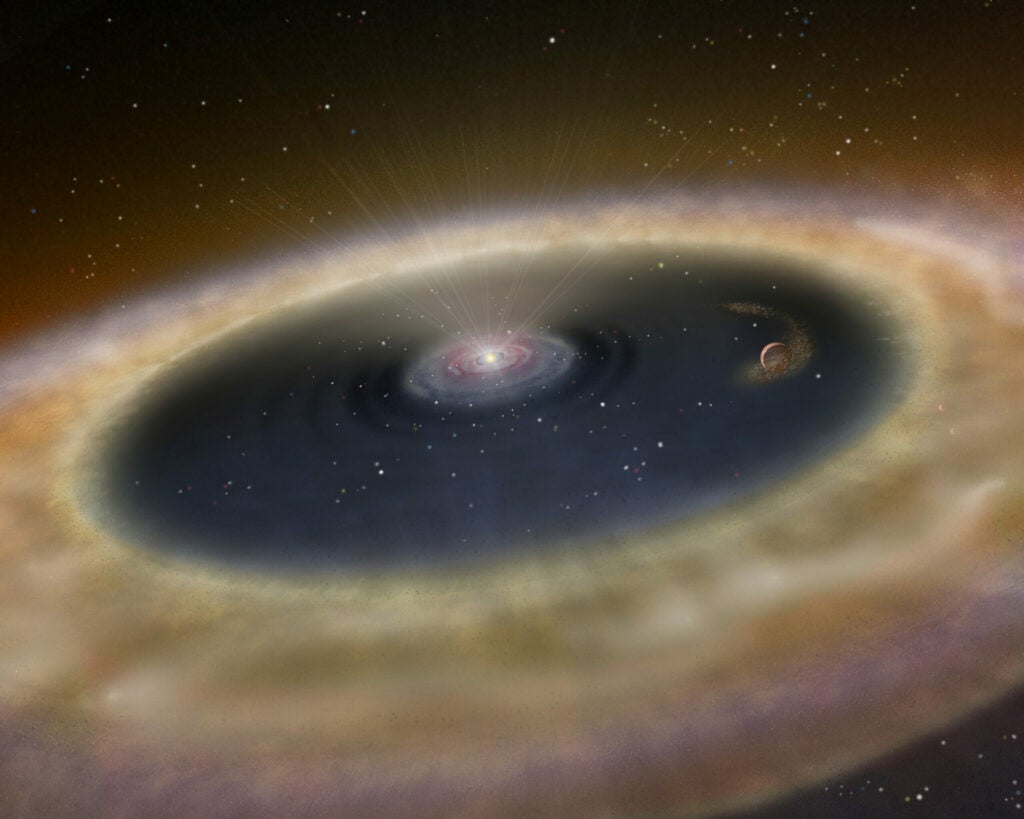 ArtistÕs impression of a baby star still surrounded by a protoplanetary disc in which planets are forming. Using ESOÕs very successful HARPS spectrograph, a team of astronomers has found that Sun-like stars which host planets have destroyed their lithium much more efficiently than planet-free stars. This finding does not only shed light on the low levels of this chemical element in the Sun, solving a long-standing mystery, but also provides astronomers with a very efficient way to pick out the stars most likely to host planets. It is not clear what causes the lithium to be destroyed. The general idea is that the planets or the presence of the protoplanetary disc disturb the interior of the star, bringing the lithium deeper down into the star than usual, into regions where the temperature is so hot that it is destroyed.