The protostar and its protoplanetary disk are still in the process of being born.

In a stellar nursery far away, a solar system with enough heft to make seven Jupiters is in the process of being born, the youngest planetary system ever observed. The system is just 300,000 years old, astronomers say. That’s incredibly young–our own middle-aged system is 4.6 billion years old.

Before this new observation, the oldest baby star disks were of fully grown “protostars,” which had already swallowed up most of the mass in the gassy dust disks surrounding them. But this new star has only used up 20 percent of the mass in its surrounding envelope of material, according to astronomers at the National Radio Astronomy Observatory. “This very young object has all the elements of a solar system in the making,” said John Tobin of the NRAO in a statement.

The star system, which is called L1527 IRS and is located in the constellation Taurus, is currently about one-fifth the mass of the sun. It will eventually have about the same mass as our star, Tobin and colleagues estimate. It’s very bright, which is likely a result of the titanic energies involved in the accretion process.

This is an interesting observation for many reasons, not the least of which is the sensitive radio-range data used to ascertain the nascent star’s existence. The astronomers used the Submillimeter Array and the Combined Array for Millimeter-wave Astronomy to detect dust and carbon monoxide around the object. They examined radio waves emanating from the carbon monoxide, and used the Doppler effect to study how the disk was rotating. They found the speed in the disk changes relative to its distance from the star, just like the planets in our solar system change their speeds relative to our star.

This is called Keplerian rotation, after planet-motion-genius Johannes Kepler. The phenomenon will allow planets to form, explained Hsin-Fang Chiang of the University of Illinois and the Institute for Astronomy of the University of Hawaii. The disk’s rotation and slower speeds far out will prevent all the material in the disk from accreting onto the star. The leftover swirling material will coalesce to form planets.

Next up is studying the baby disk in more detail with the Atacama Large Millimeter/submillimeter Array, which is almost done being built at 16,400 feet in the Chilean desert. ALMA will be able to provide even more detail about what’s happening to the disk, which will tell astronomers how planetary systems are born, Tobin said.

The paper describing the infant system is published in the journal Nature. 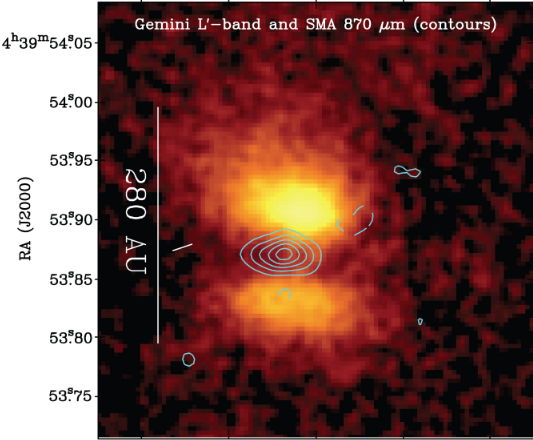 This image is showing reflected light from the upper surface of the disk around the protostar, and the contours show the emission from cold, dusty material in the disk.