Astronomers Find The Lightest Exoplanet Ever Caught On Camera

The exoplanet's predicted mass is only four to five times that of Jupiter. 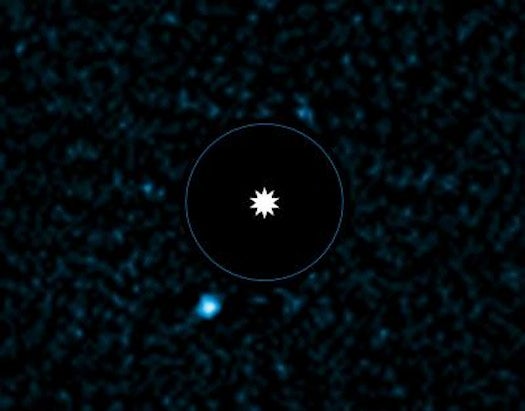 The star itself was removed from the picture during processing to enhance the view of the faint exoplanet, which appears at the lower left. ESO's Very Large Telescope
SHARE

The image above contains what scientists believe is the lowest-mass exoplanet ever to be caught on camera. Called HD 95086 b, the newly discovered planet orbits a young star about 300 light-years from Earth.

Based on the exoplanet’s brightness, astronomers predict it has a mass just four to five times that of Jupiter. The planet’s host star, which is slightly bigger than our sun and surrounded by a disc of debris, is fairly youthful—only 10 million to 17 million years old (the sun is about 4.6 billion years old).

“The brightness of the star gives HD 95086 b an estimated surface temperature of about 700 degrees Celsius,” says Gaël Chauvin, a researcher at the Institut de Planetologie et d’Astrophysique de Grenoble in France. “This is cool enough for water vapor and possibly methane to exist in its atmosphere.”

To capture an image of such a faint, distant object, astronomers used an adaptive optics instrument mounted on the European Southern Observatory’s Very Large Telescope. The instrument allowed the scientists to boost the contrast between the exoplanet and its much brighter star, which had to be removed from the image to make the exoplanet more visible.

According to the researchers, HD 95086 b may have formed from the debris disc around the parent star. The planet is 56 times farther away from its star than Earth is from the sun.