Astronomers can retrace space rocks' paths to find their birthplace. 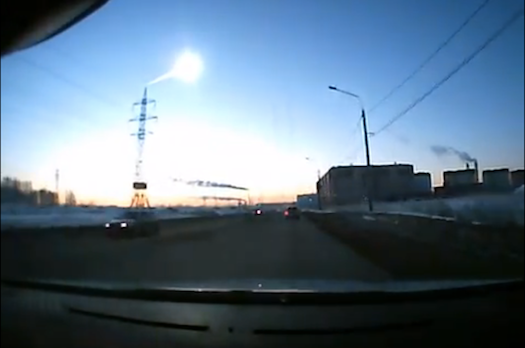 Last April, a minivan-sized chunk of leftover primordial planet punched through Earth’s atmosphere at 64,000 miles per hour. The minivan-sized meteor weighed just under 100,000 pounds before it exploded high above northern California, disintegrating into rock dust and smaller meteoroids that fell onto suburban driveways in El Dorado County.

Video cameras and weather radar captured the space rock, later nicknamed the Sutter’s Mill meteorite, as it streaked through the sky. Thanks to these detailed observations, scientists were able to reconstruct its entire life history. They hope to do the same thing for the massive meteor that exploded above Russia on Friday.

“We would need observations from at least three different locations, and then you can calculate the pre-atmospheric orbit,” said Philipp Heck, assistant curator of Meteoritics and Polar Studies at the Field Museum of Natural History in Chicago. Among the more than 45,000 officially recognized meteorites, scientists have been able to reconstruct trajectories, orbits and life histories for just 18. “So this is really a big thing if one can do that,” he said.

Heck was part of the collaboration that published the history of the Sutter’s Mill meteorite last December. It came from the asteroid belt near Jupiter, flying toward the sun and passing by both Mercury and Venus before heading out to Earth. The vast majority of meteorites are from that region–some are from Mars, and very few come from the moon. But for Sutter’s Mill, researchers were able to pinpoint a specific debris field within the asteroid belt that they believe gave birth to the meteorite.

Many small asteroids become near-Earth objects and (rarely) meteors after a kind of asteroid-belt billiards, said Peter Jenniskens, an astronomer at the SETI Institute and lead author of the Sutter’s Mill paper.

Collisions among space rocks send them bouncing in different directions and sometimes, these impacts shear off hunks of rock that become new mini-asteroids. Light from the distant sun warms their sun-facing sides, and they quickly shed this warmth in the frozen vacuum of space. Gradually, this heat exchange starts them spinning, further feeding the thermal cycle–this is known as the Yarkovsky effect. Over time, this effect grows so pronounced that it changes the asteroid’s orbit around the sun, Jenniskens said. 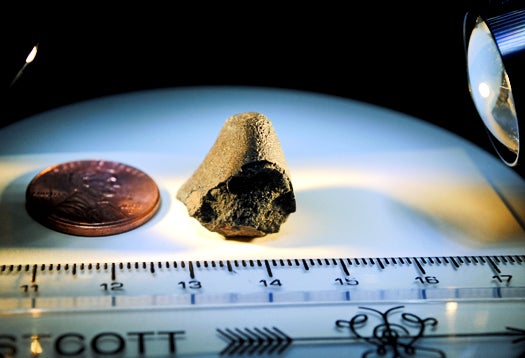 “Darth Vader” is a piece of the Sutter’s Mill meteorite, which fell over El Dorado County in Northern California on April 22, 2012. Scientists determined it was a carbonaceous chondrite, a type of asteroid made of the same materials that formed the planets.

This ever-changing orbital instability is heightened by the gravitational effects of the sun, Jupiter and the other planets. Eventually, the asteroid pieces are pulled toward the sun–and toward us.

“At some point, the object can hit the Earth. That’s how we are getting our meteorites,” Jenniskens said. “What we are getting doesn’t necessarily reflect what the near-Earth objects are; they reflect what objects in the asteroid belt are producing these pieces. We think we have a number of discrete places in the asteroid belt that are sending us these pieces.”

In the case of Sutter’s Mill, Jenniskens and colleagues were able to determine the asteroid family that birthed the fragment that hit Earth. They crawled on the asphalt in Henningsen Lotus Park in El Dorado County, hunting for meteor shards to study. They figured out how long these fragments had been exposed to cosmic rays in the solar system, which can be used to deduce how long ago it split from the rest of the family. They determined it was pretty recently in solar system history.

“There is a known debris field that could be the source for this,” Jenniskens said.

There’s still plenty of work to do before anyone can determine where Friday’s meteorite came from, but scientists are certain it did not come from the same part of the asteroid belt as 2012 DA14, which harmlessly whizzed past Earth a few hours after the meteorite impact. That rock came from the opposite direction, said Laurie Leshin, dean of science at Rensselaer Polytechnic Institute and former research director of the Center for Meteorite Studies at Arizona State University.

As they determine the meteorite’s path, astronomers might realize they could have seen it coming. On Friday, several astronomers said the massive meteor was certainly large enough to have shown up in sky surveys, and the fact that no one saw it is somewhat curious. Timothy Spahr, director of the Minor Planet Center at the Harvard-Smithsonian Center for Astrophysics, said he is planning to check his data to determine whether survey teams did actually see something. Once astronomers determine its orbit, he will know where to look, he said. Spahr sent an email from Vienna, where he was attending an extraordinarily well-timed UN conference discussing near-Earth objects.

“If the object came from the nighttime sky, we have a shot at [finding] it up to a few days from impact,” he said. “But about half of the objects will approach the Earth from the sunlit side of the sky, and no survey will ever detect these. This is one reason we wish to find all the impactors well before the last approach.”

Along with reconstructing its past via video evidence, scientists are scrambling to find fragments they can examine to unravel the meteor’s makeup. The odds are pretty good that it’s a run-of-the-mill stony chondrite–95 percent of the stony meteorites that fall to Earth fit into this category. Incidentally, Sutter’s Mill was a carbonaceous chondrite and therefore much more unique. Whatever it is, scientists would like to get their hands on it–and so would members of the public, as evidenced by reports of people trudging onto a lake near the meteorite impact to find fragments. There are already eBay listings, too.

While they shared concern for the hundreds of people who were injured, many researchers said the meteorite fall was spectacular for science. Hundreds of observations from a wide range of locations will provide plenty of data to reconstruct its trajectory, and from there, its orbit around the sun.

“At the moment, it’s a blank canvas,” Jenniskens said. “But eventually, this rock will get an identity and we will know more about it.” 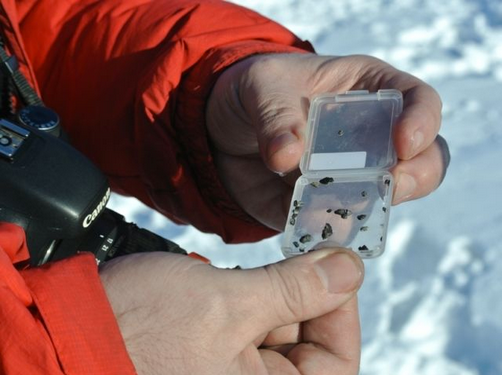