Of all the ways planets can die–consumed by their host stars, for instance, or obliterated by a collision with another... 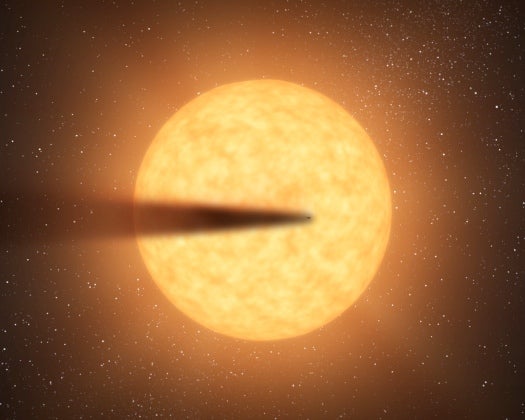 Of all the ways planets can die–consumed by their host stars, for instance, or obliterated by a collision with another planet or asteroid–evaporation isn’t one that had crossed many astronomer’s minds. But data from the exoplanet-hunting Kepler observatory has revealed a nearby planet–just 1,500 light years from Earth–that appears to be evaporating before our very eyes. Over the next 100 million years, the planet will completely disintegrate.

The planet is orbiting a star cataloged as KIC 12557548 so closely that it makes a complete circuit in just 15 hours–one of the shortest orbital periods ever observed. That close proximity to its star generates temperatures of up to 3,600 degrees on the planets surface–temperatures that are literally causing rocky material to evaporate straight from the surface, forming a wind that carries it into space as gas and dust.

Kepler found this strange case of slow planetary death by observing a plume or tail that seems to be trailing behind the planetary body as it races around the star. At first scientists thought the data might be showing a planetary duo, with the planets orbiting each other as they both orbit the star. But further investigation led to a different conclusion: that the high temperatures produced by a single planet’s close proximity to the host star is actually causing the planet to shed material into its wake.

That’s interesting enough on its own, but perhaps the real news here is that astronomers were able to see this planet at all, given its small size (it’s roughly the size of Mercury) and the fact that it is so close to its parent star. The teams analyzing Kepler data continue to get better and better at pulling meaningful observations from the noise, and the catalog of exoplanets continues to grow accordingly. And, as the case of the evaporating planet clearly exhibits, every now and then we see something that we’ve never before had the chance to observe.