Our Solar System Formed From The Cumulative Ashes Of Countless Stars, Not One Supernova

New study challenges the theory that an exploding star provided the impetus for our solar system. 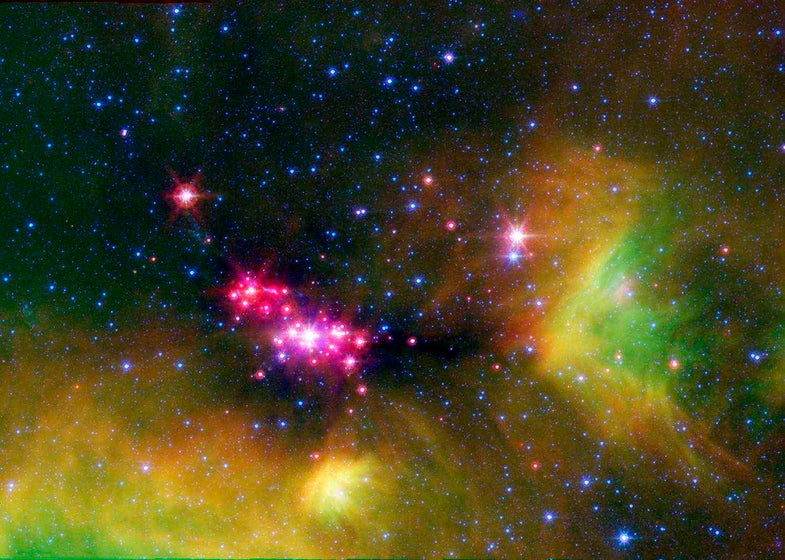 Infant stars are glowing gloriously in this infrared image of the Serpens star-forming region, captured by NASA's Spitzer Space Telescope.   The reddish-pink dots are baby stars deeply embedded in the cosmic cloud of gas and dust that collapsed to create it. A dusty disk of cosmic debris, or "protoplanetary disk," that may eventually form planets, surrounds the infant stars.   Wisps of green throughout the image indicate the presence of carbon rich molecules called, Polycyclic Aromatic Hydrocarbons (PAHs). On Earth, PAHs can be found on charred barbecue grills and in automobile exhaust. Blue specks sprinkled throughout the image are background stars in our Milky Way Galaxy.  The Serpens star-forming region is located approximately 848 light-years away in the Serpens constellation.  The image is a three-channel false-color composite, where emission at 4.5 microns is blue, emission at 8.0 microns is green, and 24 micron emission is red. Spitzer Space Telescope
SHARE

We are all star stuff, as Carl Sagan once so eloquently put it–we come from remnants, the leftover pieces of long-dead stars and the elements forged inside of them. But a new theory says we came together as the result of a slow agglomeration, not a titanic explosion. Our solar system was born like a snowdrift on a blustery day, particles slowly clustering together in ever-increasing groups until something notable forms.

This flies in the face of most solar system formation scholarship, which holds that shockwaves from a nearby supernova triggered the collapse of the dust cloud that eventually became our star and our planets. Computer models and 3-D simulations have confirmed that theory for at least the past couple of years. Now comes a new analysis of heavy elements by researchers at the University of Chicago.

Authors Haolan Tang and Nicolas Dauphas looked at concentrations of iron-60, a radioactive isotope of the metal that forms in an exploding star. Previous research has found high levels of this material in meteorites, early solar system leftovers that serve sort of like time capsules. An abundance of iron-60 is strong evidence for a supernova in the nearby cosmic neighborhood.

But Tang and Dauphas say it is well-mixed and in low abundance in our solar system, which casts doubt on that assumption. Tang and Dauphas examined the same meteorites, but used a different method–dissolving the meteorites to examine their contents–which reportedly reduced their error rates. To double-check it, they also looked for iron-58, an isotope that supernovas also produce. That isotope is also sparsely distributed, which confirmed the scarcity of iron-60 because the isotopes are so closely related.

If they’re right, and there’s not an abundance of iron-60, then there’s no need to say a supernova shockwave collapsed our nascent solar system’s dust cloud. So what did provide the push? Perhaps a massive star shed its gassy outer layers, spewing the material that would eventually become our solar system, according to these researchers. These materials coalesced and formed our sun, with some remaining mass eventually becoming the planets.

It remains to be seen how other planetary geologists will feel about this new wrinkle. But iron abundances will have to be taken into account when scientists try to describe how we got here, Tang said. The paper appears in Earth and Planetary Science Letters.