Space Rocks 101: What You Need To Know About Russia’s Meteor

Confused about the difference between a meteorite and a killer asteroid? We've got you covered. 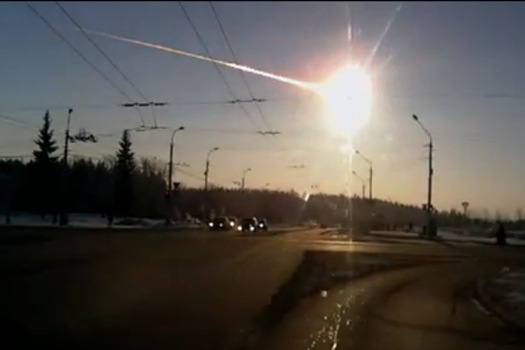 As updates roll in from Russia and the meteorite-related injury toll rises, you may be scrambling to remember what a meteorite really is. If you’re a little rusty on your astronomy, here’s some basic info about space rocks and why this one was unusual.

What is the difference between all these space rocks?

Asteroid: Any number of celestial bodies smaller than a planet that orbit the sun, between a few kilometers and a few hundred kilometers in diameter.

Comet: An icy body that orbits the sun, like an asteroid, that features a “coma,” a thin, temporary atmosphere of gas and dust, and a tail.

Meteor: The glowing streak in the sky we see when an object from space enters the atmosphere and heats up.

Meteoroid: Small rocky or metallic pieces of debris flying through space that can come from a fragment of an asteroid or comet. They can be anywhere from the size of a speck of sand to the size of a large boulder.

Meteorite: The a portion of a meteoroid or asteroid that survives the journey through a planet’s atmosphere to make impact.

Bolide: An especially bright meteor — a fireball that explodes. Geologists use the term when they don’t know the nature of an actual projectile to mean a large impactor that forms a crater.

Special bonus definition: Tektite! Pieces of natural glass that are believed to form when meteorites collide with the Earth, rapidly heating up quartz-rich soil and rock and sending the molten material flying over great distances. When it cools, it forms tektites.

When one of these space rocks has an orbit that swings within 1.3 AUs (about the distance between the Earth and the Sun) of our fair planet, it’s deemed a near-Earth object.

As much as 100,000 tons of space-stuff lands on Earth every year, most of it dust from collisions in the atmosphere, according to geologist Denton Ebel, the American Museum of Natural History’s curator of meteorites. Laurie Leshin, the dean of science at Rensselaer Polytechnic Institute in New York, puts that number at closer to 40,000 tons, but because most cosmic dust collects at the Earth’s poles in ice or is collected by high-flying planes, it’s difficult to get an exact number.

Addi Bischoff, a University of Muenster mineralogist, told the AP that strikes the size of this one happen five to 10 times a year, but not in an area where they would cause injuries. Most of them land in the desert or the ocean and don’t cause much of a ruckus.

“The bigger ones that come in and survive are rarer,” he says. The largest known meteorite to hit the Earth is the Hoba meteorite, a 60-ton hunk of iron discovered in Namibia in 1920. It’s estimated that it fell less than 80,000 years ago.

What do we know about the meteorite that struck Russia?

Not much, yet. We know that it entered the atmosphere at a shallow angle, and isn’t related to the asteroid 2012 DA14.

We don’t yet know for certain if the meteorite, a bolide, was made of rock or of iron — a tightly welded iron meteorite is denser than one made up of a pile of rubble. A statement from the Russian Academy of Sciences estimates the meteor was 10 tons and exploded 20 to 30 miles above the surface of the Earth. During a NASA press conference this afternoon, experts said it was probably not a metallic object because of the way it broke apart.

Don Yeomans of NASA’s Near-Earth Object Program told SPACE.com that “if the reports of ground damage can be verified, it might suggest an object whose original size was several meters in extent before entering the atmosphere, fragmenting and exploding due to the unequal pressure on the leading side vs. the trailing side.”

It’s likely that a sort of CSI: Meteorite will play out as scientists map out the area of destruction and the trail left in the atmosphere to determine the force of the impact and what the explosion must have been like. Right now, all we have to go on is a lot of amateur video.

Once actual data comes in, it’s possible that this will change what we know about meteorites. “What we model and what we expect is almost never what we find,” Ebel says. “We should expect to be surprised.”

Why was this one such a big deal?

The object that blasted through central Russia today has injured more people than any other meteorite Ebel has heard of in human history. It’s the biggest object to strike the Earth since the meteorite that exploded over Siberia in 1908, a blast that downed an estimated 80 million trees in an 830-square-mile area. 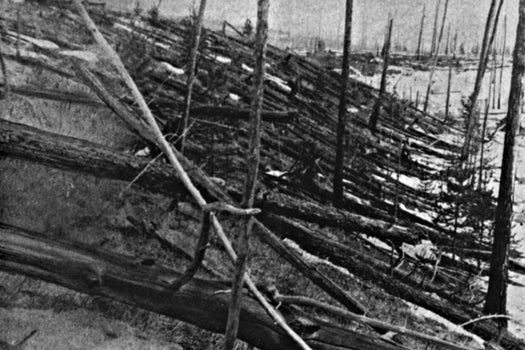 A meteorite exploded over the Podkamennaya Tunguska river in Siberia in 1908, downing an estimated 80 million trees in an 830-square-mile area.

Near-Earth objects don’t often hit urban areas. Though this meteorite may have been one of the largest objects to strike Earth in recent history, it was still relatively tiny — some three meters in diameter, about the size of a refrigerator, according to Ebel.

Why did so many people get hurt?
Most of the damage seems to have come from the air burst generated when the meteor hit the Earth’s atmosphere, moving at an estimated 33,000 miles per hour. Ebel likens it to a truck exploding up in the air. The Russian Academy of Science’s estimate is that the meteor shattered between 18 and 32 miles above the Earth, releasing several kilotons of energy and sending meteorites across central Russia and part of Kazakhstan.

In 2003, a meteorite fell in a suburb south of Chicago, showering the area in debris, but it didn’t blow out windows, possibly because it exploded higher in the atmosphere. In contrast, the pressure wave from this fireball blew out a ton of windows, injuring those that (understandably) ran to watch the exploding fireball streak across the skyline. The latest count has somewhere around 1,200 people injured, many in the city of Chelyabinsk. Most injuries are not thought to be serious, according to CNN’s latest report.