Why Wild Animals Are Moving Into Cities, And What To Do About It

Global warming and environmental destruction are driving coyotes, bears and mountain lions out of their habitats, but that's only part of the reason why so many animals call the city home. 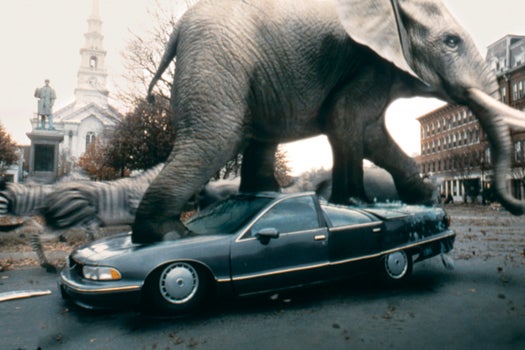 It’s been a while since he tried to count them all, but Stan Gehrt estimates that more than 2,000 coyotes make a comfortable living in the Chicago metropolitan area today. And in the 12 years he’s spent tracking the animals with radio and GPS collars, Gehrt, a wildlife ecologist at Ohio State University, has witnessed some remarkable adaptations. Suburban coyotes, like the pack in a residential area a few miles from O’Hare airport, have learned to live in much smaller territories than they do in rural places. Downtown coyotes, which roam among the towers and traffic of the Chicago Loop, thrive in the city by hunting enough small rodents to feed themselves and their young. Some urban coyotes have even been spotted crossing streets in busy traffic—at the light, looking both ways, just like human Chicagoans.

What’s happening in Chicago is happening around the world, and not just with coyotes. Gehrt and other researchers in his field are convinced that urban areas should prepare to make room for large carnivores. Coyotes, which live in every state but Hawaii, have appeared in cities from Los Angeles to New York. This spring, biologists in Los Angeles radio-collared the first mountain lion ever found in Griffith Park, the home of the Hollywood sign. Complaints about bears in Nevada around Lake Tahoe increased tenfold between 1997 and 2007. Red foxes have colonized London.

These animals are going to great lengths to live in human territory. Two years ago in London, building staff found a fox living on the 72nd floor of the unfinished Shard skyscraper, where it had been living on construction workers’ discarded food scraps. The new territory is changing animals’ behavior, too. Some bears in Lake Tahoe, well fed on garbage year-round, now neglect to hibernate in winter.

It’s reasonable to assume that these animals are moving to the city because they’re being displaced by climate change and habitat destruction, but that’s only part of the explanation. One of the biggest factors is that there are more large carnivores than there used to be—primarily, Gehrt says, because of successful conservation efforts. As we make our cities greener, they become more attractive to humans and animals alike. Finally, the relationship between humans and large predators is changing. “We’re now seeing generations of certain carnivores that have had fairly light amounts of persecution by people,” Gehrt says. “They may view cities quite a bit differently than their ancestors did 50 years ago. Then, if they saw a human, there was a good chance they were going to get shot.” 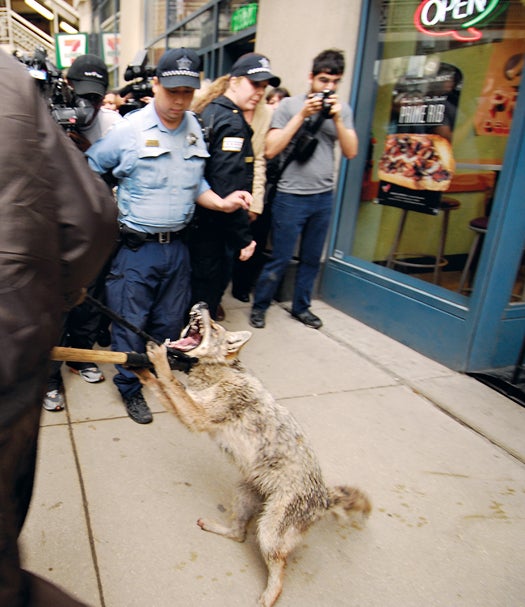 ** ADVANCE FOR TUESDAY, MAY 29 – FILE ** Animal control officers capture a coyote at a Quizno’s sandwich shop in Chicago, Ill., in this photo from April 3, 2007. Increased encounters with coyotes in urban areas prove that the remarkably adaptive critters, famous for roaming rural stretches, prairies and western deserts, have gone metropolitan. Of the 541 coyotes removed on average across Illinois over the past three years by licensed specialists in dealing with animals deemed nuisances, 312 were from the Chicago area, the state Department of Natural Resources says. (AP Photo/Chicago Sun-Times, Scott Stewart) **CHICAGO OUT, MAGS OUT**

While the new inhabitants keep their distance from people most of the time, conflict is inevitable when these animals and humans share space. Sometimes the conflict is between the invading predators and our own domesticated animals. A few years ago in a Chicago suburb, an elderly woman fought off a coyote that tried to attack her leashed poodle in a mall parking lot. More serious clashes are rare but not unheard of. In a two-month span in 2011, a coyote attacked children in the Denver suburb of Broomfield on three separate occasions.

As we make our cities greener,
they become more attractive to humans and animals alike.Gehrt and two other wildlife ecologists traveled to Broomfield to help officials find out what was causing the attacks, and the report that they wrote serves as a template for other cities dealing with carnivores. Much of the advice is common sense. Taking away easy meals—garbage and outdoor pet food—can help control issues with any species. In Nevada, for example, bear-proofing garbage cans and dumpsters has helped decrease complaints by two thirds since 2008.

Ultimately, though, the key to living with urban carnivores might be to return to an older, more natural relationship between humans and wildlife—one in which they are genuinely scared of us. Gehrt’s report urges anyone who spots a coyote to shout, throw rocks, or even shoot it with a paintball gun.

When a large predator loses its instinctive fear of humans, after all, that animal becomes more likely to attack. Gehrt says that culling truly fearless animals is necessary for maintaining a harmonious urban life with coyotes—a life that he sees as inevitable. “The question becomes, to what degree are we going to tolerate the risk, and what kind of adjustments to our lives are we willing to make?” Gehrt says. “Because we can’t get rid of them.”