A cross-species approach to studying well-being shows that these crises may be biologically built in. 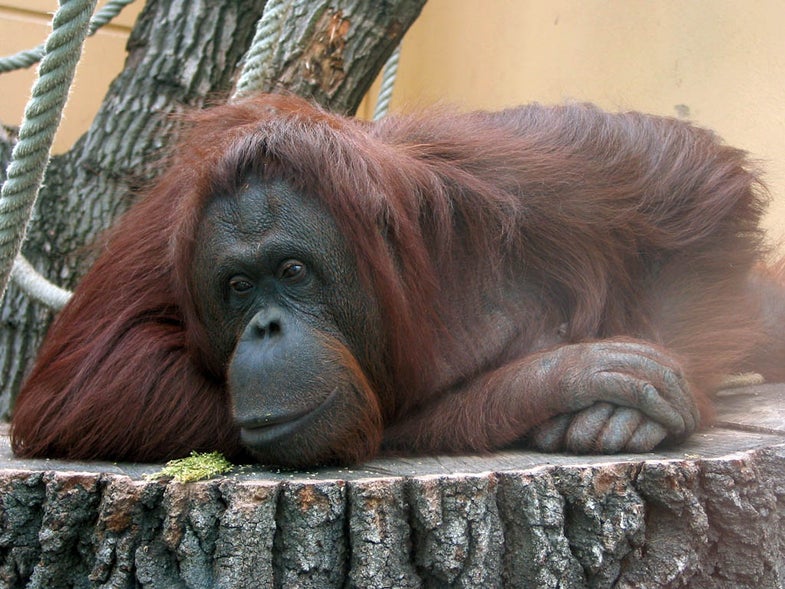 Across cultures and countries, humans experience a pretty well-defined U-shaped curve in our happiness. We’re happy when we’re young, and well-being descends into its nadir during midlife, only to rise again in old age. Midlife crises are a cliche, but they’re real–and they’re just as real in our primate cousins, apparently.

A study of 336 chimpanzees and 172 orangutans found a similar U-curve in their well-being, according to researchers in the UK, US and Japan. The animals were housed in zoos and sanctuaries in the US, Japan, Canada, Australia and Singapore, and keepers and caretakers measured their well-being. The animals received happiness scores, adapted from similar subjective measurements used on humans. It turns out they also experience a U-shaped curve in happiness throughout life, the researchers say.

It cannot be because of mortgages, marital breakup, mobile phones, or any of the other paraphernalia of modern life. Apes also have a pronounced midlife low, and they have none of those.

Obviously, economic changes, social forces and cultural norms influence midlife unhappiness in humans, and the researchers say they’re not ruling that out. But the fact that great apes also experience a happiness drought in midlife suggests there are evolutionary and biological reasons.

“We hoped to understand a famous scientific puzzle: why does human happiness follow an approximate U-shape through life?” said economist Andrew Oswald from the University of Warwick. “We ended up showing that it cannot be because of mortgages, marital breakup, mobile phones, or any of the other paraphernalia of modern life. Apes also have a pronounced midlife low, and they have none of those.”

There are several possible biological explanations, the authors say in their paper. Happiness is associated with longevity in both humans and apes, so it makes sense that older apes are happy. It could also be that the U-shape in happiness stems from changes in brain structure that happen as humans and other apes age, the researchers say. Or, and this is interesting, it could be that older adults rely on behavior to regulate their emotions. “For example, they may seek out situations and group members that elicit more positive emotions or shift to goals that are more attainable in older age,” the authors say. We buy nice cars; middle-aged apes hang out with different friends.

“Our results imply that human wellbeing’s curved shape is not uniquely human and that, although it may be partly explained by aspects of human life and society, its origins may lie partly in the biology we share with great apes,” the authors write.

The study is published today in the Proceedings of the National Academy of Sciences.