Will This Fish Transform Medicine?

Why the tiny zebrafish is becoming many researchers’ favorite animal 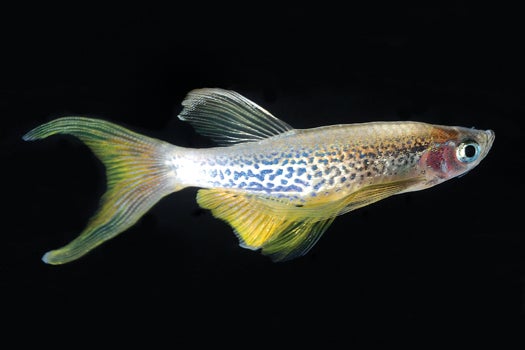 The animal facility on the bottom floor of a drab building at Duke University is uncomfortably warm and smells a bit like raw seafood. That’s not surprising given what’s down there. The space holds a few thousand plastic fish tanks, each home to dozens of zebrafish: one-inch-long, big-eyed vertebrates that are becoming go-to research subjects for many scientists.

Nico Katsanis, a Duke geneticist who hunts down the causes of rare illnesses, is one of a growing number of researchers choosing to work with zebrafish instead of rodents. Since scientists learned to selectively mutate zebrafish DNA in 1988—giving them the ability to turn the species into models of human diseases—the number of biomedical zebra-fish papers has skyrocketed, from 26 to 2,100 last year. The nonprofit Zebrafish International Resource Center, which sells 2,608 different genetically modified strains to researchers, lists 921 academic labs and companies that use the fish. “The field is on fire,” says Leonard Zon of Harvard Medical School. Zon’s lab, for example, has used fish models to study skin cancer, blood diseases, and stem cells. Others have created fish with DNA mutations linked to narcolepsy, muscle disorders, and the large head size associated with autism.

To be sure, rodents still outnumber zebrafish in medical research labs. In 2010, biomedical research papers that used mice or rats were 10 times as common as those that used any other lab animal, and some biological processes—complex brain disorders, say, or anything involving lungs—are best studied in mammals rather than fish. But for most other experiments, from watching tumors develop to screening for new drugs, zebrafish are gaining ground.

Zebrafish offer three major advantages over rodents. First, they quickly make more zebrafish. A female spawns hundreds of embryos three days after fertilization; mice take three weeks to produce just 10 pups. They are also inexpensive to maintain—about 6.5 cents a day for a tank of a few dozen fish, compared with 90 cents for five mice in a cage. Finally, because larval fish are transparent, researchers can literally watch their organs grow, which makes them especially good for studying problems with organ development.

Because larval zebrafish are transparent, researchers can literally watch their organs grow.At Duke, Katsanis and his colleagues use zebrafish to more accurately diagnose babies with mysterious health problems, with the goal of eventually finding treatments for them. Although lab rats and mice can be great for common diseases, this kind of research—which looks at exceptionally rare illnesses—would be prohibitively expensive and slow in rodents. The researchers recruit infants with suspected genetic problems from the nearby community. After a team clinician evaluates an infant, the researchers ship a tube of its blood to the Human Genome Sequencing Center at the Baylor College of Medicine. There, machines sequence the child’s DNA. If there are mutations (and there almost always are), Katsanis’s team can, in a couple of hours, insert the same genetic glitches into a larval zebrafish, making a model of the patient. Then, the researchers use microscopes to observe the fish for about five days, watching for any anatomical defects that develop.

Since 2010, the Duke team has made zebrafish models for 20 children. It has found “stone-cold causal or very strong leads” for their problems, Katsanis says. For example, they worked with a baby girl who was born with her heart on the wrong side of her body. The researchers replicated the six genetic mutations they suspected were responsible for her syndrome in thousands of zebrafish embryos. Then they screened those fish for a displaced heart. They’re not yet finished, but they’ve already determined that one of the mutations is linked to her condition.

Within the next five years, researchers will be using zebrafish to find treatments for these rare diseases, Katsanis says. Fish are great for screening many molecules to identify promising drugs for further testing in mammals. Researchers simply put the compound in the water, and the fish absorb it through their skin. Zon’s Harvard lab was the first in the world to develop a new drug initially discovered with zebrafish. The researchers tried some 2,500 different molecules on the fish in just four months, one of which dramatically increased the animals’ blood-stem-cell counts. After testing the drug in mouse cells, they performed a clinical trial in 2009 with 12 leukemia patients whose blood cells had been wiped out from chemotherapy. The drug quickly boosted blood counts in 10 of them. Since then, Zon has used the zebrafish-screening method to find a potential melanoma drug, which he has so far tested in two people.

This should be only the beginning of a rush of treatments coming down the zebrafish pipeline. “More labs are building aquariums,” Katsanis says. “The number that use zebrafish is going up hyper–exponentially.”