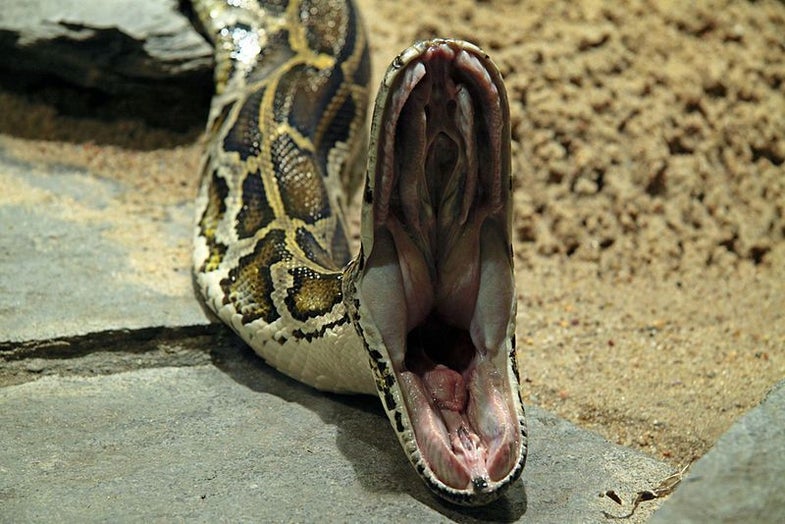 This weekend, the Florida Fish and Wildlife Commission kicked off the 2013 Python Challenge in Davie, Florida, a smallish city near Fort Lauderdale. The Python Challenge registers python hunters and gives cash prizes to those who can gather the most–or the biggest–pythons. As much as it’s weird to award people for killing the most snakes, this is absolutely the right move for Florida–unlike Wyoming’s stance on wolves.

Burmese pythons, native to southeast Asia, are massive constrictors, reaching up to 17 feet long. They were brought to Florida as pets and either escaped or were released into the wild, and found themselves an environment totally unprepared for them. South Florida, especially the area in and around the Everglades, is home to an astounding number of rare and vanishing plants and animals, vanishing faster due to an all-out frontal environmental assault from land developers and politicians. The Everglades is a quarter of its natural size and nowhere near as healthy as it should be. And the Burmese python is one of the worst invasive species in the entire country.

Burmese pythons eat small endangered animals like the mangrove fox squirrel, the Key Largo woodrat, the wood stork, and the Key Largo cotton mouse. Burmese pythons drastically reduce the number of non-endangered species like raccoons, opossums, white-tailed deer (yeah. They are fearsome hunters), and coyotes, which can have a negative effect on the health of the ecosystem as a whole. There is no snake in south Florida anywhere near as big or as effective a hunter as the python, so these animals do not see snakes as a threat and do not attempt evasive action. Burmese pythons compete for resources–very effectively–with endangered or vulnerable endemic species like the Florida panther, American crocodile, and many native snakes.

In short, Burmese pythons are a menace, and they are bad for Florida. We know that because scientists have told us that. So, good. Offer cash to python hunters. But not all snake hunters! Snake hunting is a common event in much of the country, but in the cases of even dangerous snakes like rattlesnakes, mass killings are very bad for the environment, as this petition argues. That doesn’t apply to introduced snakes like the Burmese python, so, go nuts, Florida. Win that prize.