Maybe you've heard that volcanic eruptions can affect climate, but new evidence suggests it happens the other way around, too. 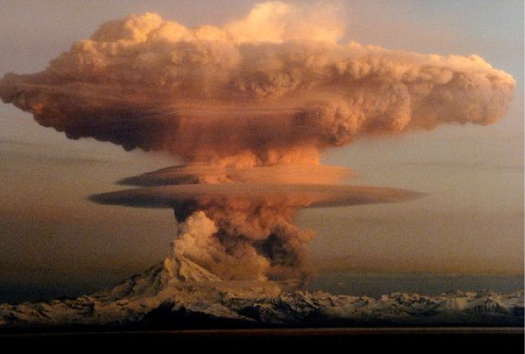 Here’s an idea you’ve probably heard before: volcanic eruptions–the big, explosive Pinatubo kind–spew millions of tons of sulfur dioxide into the stratosphere, and the sulfur dioxide stays there for a few years, reflecting sunlight and cooling down the planet for a few years. In other words, eruptions can affect climate.

But new evidence suggests that the volcano-climate relationship can go the other way, too: Periods of warming after ice ages can lead to volcanic eruptions.

In a recent study, a team of geologists examined samples of sea-floor mud from around the Ring of Fire for evidence of past eruptions. Preserved within the million-year mud record were tell-tale layers of ash from 91 volcanic eruptions. Since mud accumulates at a regular rate, the researchers could use the position of the ash layers to date each of the volcanic events.

When they analyzed the frequency of ash layers in the record, the researchers found a pattern: large eruptions tended to occur once every 41,000 years. Random as that number may sound, it’s as familiar to paleoclimatologists as the moon’s 28ish-day cycle is to the rest of us: over the course of 41,000 years, the Earth tilts gradually forward, and then backward, on its axis. It’s called “Obliquity,” and it’s one of the three “Milankovitch Cycles” that happen over long time periods and influence Earth’s climate. They are hard to visualize, so here’s some really nice help:

Scientists think that the regular changes in Earth’s tilt may have a big effect on the start and end of Earth’s ice ages. The planet’s tilt is what gives us our seasons–when the northern hemisphere is tilted toward the sun, the days are longer and warmer; when Earth swings around to the other side of the sun and the northern hemisphere is tilted away, the days are shorter and colder–and, when the tilt decreases, the seasons become less intense. At high latitudes, less intense seasons may mean that the summers don’t get warm enough to melt all of winter’s ice; eventually, those cold summers add up to an ice age.

So, how could an ice age trigger a volcano? The answer is deceptively straightforward: When an ice age starts, the world’s water shifts some of its weight from ocean basin to land, and the continents get compressed by the vast, miles-thick ice sheets sitting on top of them. When things warm up, the ice begins to melt and run back into the oceans, taking a great load off of the continents. All this movement pushes around magma under the continents’ surface, the same way one end of a water balloon bulges out when you squeeze the other end, and a sudden decrease in pressure over the land may cause magma to surge upward from deep below.

The climate-volcano connection doesn’t apply to Earth’s current warming trend, of course, because we’re not in the middle of an ice age–it’s been 12,000 years since the world’s continents felt the weight of all that frozen water. (And yes! When it melted, there were lots more eruptions than normal!)