Fake Snow Made From Sewage Comes Out Yellow

An Arizona ski resort was the first to make snow from sewage "effluent," but the color was just a little off. Oops! 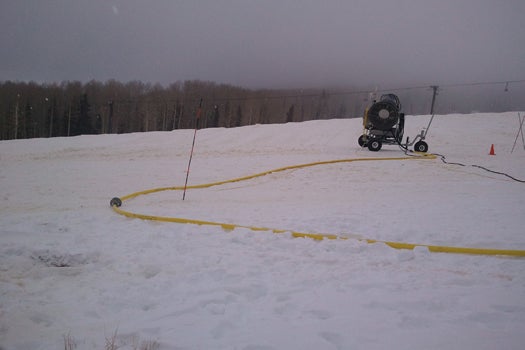 There’s been a longstanding battle in northern Arizona over the use of faux-snow engineered from sewage “effluent,” or runoff. On one side: a ski resort that wanted to use the fake snow. On the other: opponents who worried about the snow’s potential health and ecological hazards. The ski resort triumphed and recently covered its grounds in the sewage-y snow, but there was one little problem: the stuff came out yellow.

Snow “guns” were used to cannon the discolored snow out onto the trails, where some people noticed the fake snow was a little, um, unconvincing. The resort’s manager told the New York Times that the color was caused by “rusty residue in the new snow-making equipment” that’s piping the snow in from a nearby sewage treatment plant. The government’s environmental officials haven’t confirmed or denied that.

The snow does contain small amounts of chemicals–hormones, antibiotics, etc.–it’s just debatable what kind of health problems those can, or will, cause. A 2005 permit approved the resort’s plans for the snow, which resort officials say they need to use when less snow falls naturally. Critics of the process say it’s time for another look.

A state government inspector is being sent over to look into the discoloration problem, at which point we’ll find out if that whole beware-the-yellow-snow adage is right. 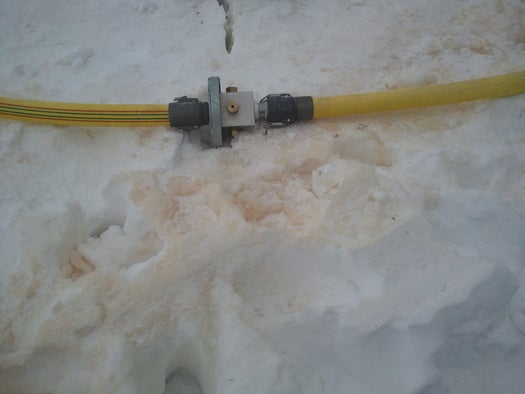