Japan’s 2011 Earthquake Happened In An Area Considered Low-Risk. Where’s Next?

New clues show how the massive Japanese earthquake happened, and how certain faults could pose a previously unrealized threat. 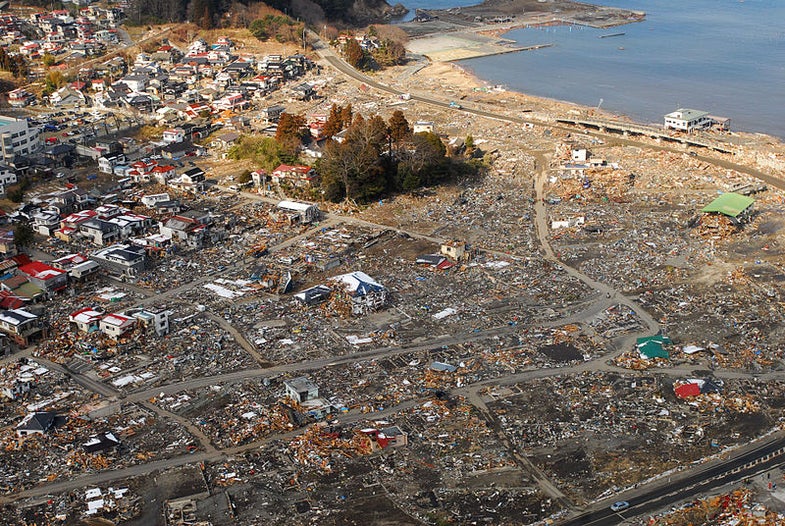 The massive earthquake that walloped Japan nearly two years ago is still bringing some unfortunate news. The quake happened in an area where it was assumed it shouldn’t–and a new model shows how the type of fault involved can turn destructive, seismologists say. The new findings could force governments and researchers to reevaluate seismic hazards in areas that were thought to be at low risk for earthquakes.

Faults in the Earth’s crust–a meeting point between tectonic plates–dissipate stress in a couple of different ways. Some plate areas slip against each other excruciatingly slowly, moving a few millimeters or tens of millimeters a year, explained Nadia Lapusta, a professor of mechanical engineering and geophysics at Caltech. These are called creeping faults. Others are known as stick-slip faults, in which the plates push against each other with mutual force until the fault finally ruptures, which we perceive as an earthquake. Faults around the world can function in both ways.

There’s a key difference in the fault areas’ stress relief methods, Lapusta said: Creeping faults ease tension by gradually moving against each other, like a steam valve releasing pressure. Stick-slip faults, on the other hand, build up stress and wreak havoc when it finally releases in the form of seismic waves. “The prevailing view is that earthquakes would not propagate in [the creeping] segment, whereas the ones that lock are prone to earthquakes,” she said. “And this kind of behavior will continue forever.”

There is also evidence that subduction zones, in which one plate sinks below another, might be more stable than stick-slip zones. And there’s evidence that shallow fault sections are more stable generally; they could experience some micro-quakes, but in general, the most massive earthquakes happen deep within the Earth. But the March 11, 2011 Tohoku-Oki quake proved this all wrong.

The terrifically powerful earthquake, magnitude 9.0, ripped along the subduction zone between the Pacific plate and Eurasian plate. It triggered a tsunami that killed some 19,000 people and destroyed the Fukushima Daiichi nuclear plant. Deep within the Earth, it was just as destructive–estimates vary, but most earthquake models show between 50 and 80 meters of slip, a humongous number. By contrast, along California’s San Andreas fault, which could experience an earthquake around magnitude 7.8, the fault would slip 10 meters, Lapusta said.

“Tohoku-Oki was really unprecedented; there are no other measurements of such a large slip,” she said. There were some other strange behaviors, too, including differences in the shallow depth where seismic waves propagated from the earthquake’s epicenter.

What happened? Rather than preventing the earthquake, the creeping fault zone may actually have amplified it, Lapusta and a co-author, Hiroyuki Noda of the Japan Agency for Marine-Earth Science and Technology, write today in Nature. Sparked by a nearby fault rupture, the supposedly stable creeping area became active, contributing to an even larger, more destructive earthquake. Noda and Lapusta built a new mathematical model for this behavior, and it matches what happened in the 2011 quake as well as a massive 1999 temblor in Taiwan.

“If you assume that area was stable, and was dynamically triggered by the nearby segment, that results in the seismic radiation that matches what actually happened,” Lapusta said. “There are other ways to match that pattern, but it is a suggestion that this model may be relevant.”

She and Noda compared rock samples from the fault zone in Taiwan, and found the stress-radiation properties fit their model. As it happens, seismologists are hoping for samples drilled by the Japanese Chikyu research vessel, which set new records last fall for the deepest-ever science-based penetration into the planet. Measurements from those samples could help validate this model, too.

The takeaway? This suggests creeping fault zones may be quite dangerous. The San Andreas fault has a similar seismic profile, Lapusta said. Understanding its possible dynamics would have implications for earthquake prevention strategies here and around the world.