Despite numerous challenges to the theory, it remains foundational 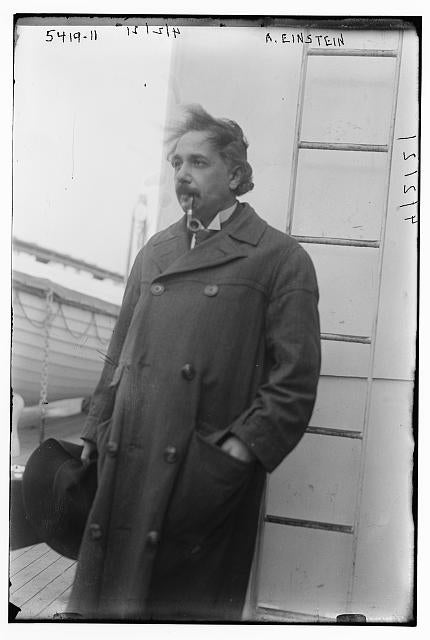 One hundred years ago this month, Albert Einstein redefined what gravity is, overthrowing his own hero Isaac Newton.

Newton had imagined gravity to be a force like any other that pulls on things to get them going. But Einstein wove gravity into very fabric of space and time, molding an invisible landscape of hills and valleys through which objects move. The equations describing this vision, known as the general theory of relativity, have since become a cornerstone of modern physics—opening new doors for understanding everything from how planets and stars move to existence of dark matter and the early days of the universe itself.

“Today it really is the standard model for gravity,” says Clifford Will, a physicist at the University of Florida who has devoted his career to the theory. “It has passed every experimental test with flying colors.”

That hasn’t stopped people hoping to challenge the wild-hair genius from drawing up alternative theories. New ideas for modifying general relativity have multiplied in recent years. Some add extra dimensions to the universe. Others invent brand-new particles. All have one thing in common: no evidence has ever been found to back them up.

“There are hundreds of these theories in the scientific literature,” said Tessa Baker, a theoretical physicist at the University of Oxford. “You can build all sorts of gravity theories that behave in all sorts of different ways.”

No one seriously expects to ever throw out Einstein’s equations entirely—except maybe the crackpots who sent unsolicited manuscripts in the mail to science journalists like me. But physicists have good reason to be grumpy about general relativity, despite its success. It doesn’t get along with quantum mechanics, which governs the smallest scales of reality. And it includes a fudge factor that troubled Einstein himself, who added it to account for the accelerating expansion of the universe. But here in our own solar system, general relativity has proven itself time and time again.

Consider the planet Mercury. The elliptical path it traces through the heavens moves around over time. Newton’s math could explain this precession for other planets, but not Mercury. It took Einstein to identify the cause: warped spacetime near the Sun has a pronounced effect on Mercury, the closest planet to the Sun.

General relativity also predicted how much those distortions from the Sun’s gravity should bend a ray of light passing nearby. Teams of British astronomers who traveled to South America and Africa famously confirmed that prediction by photographing stars visible close to the Sun during a solar eclipse. 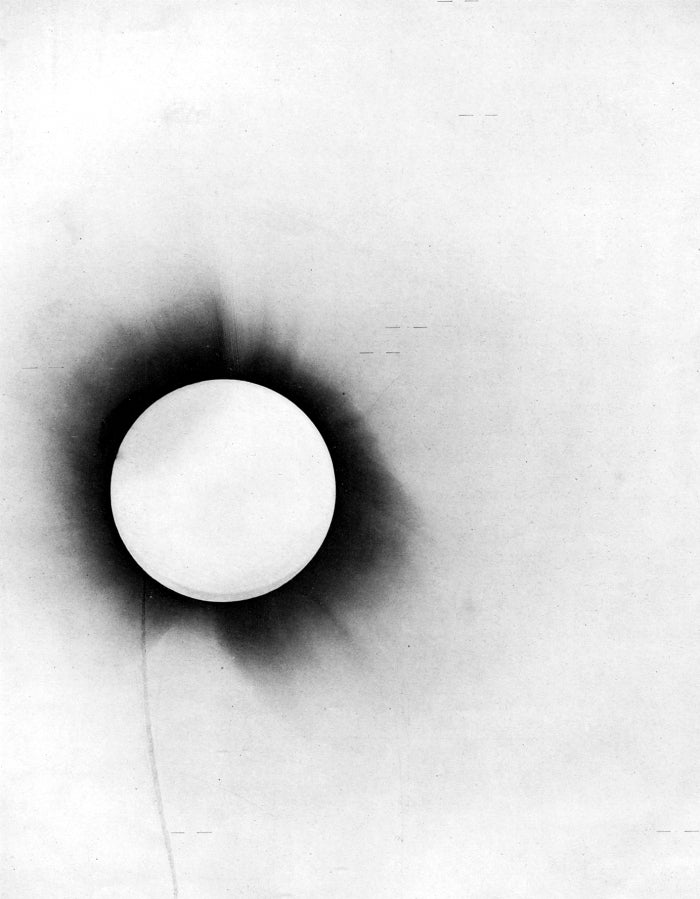 In this 1919 negative of a solar eclipse, British scientist Sir Arthur Eddington helped verify Einstein’s theory of general relativity, showing light bending around the Sun as predicted in the theory.

Others have since cast doubt on that experiment—claiming that the astronomers perhaps saw what they wanted to see—but the ability of stars and other celestial entities to not only bend light but shift its color is now well-proven. Some heavenly bodies even focus the light coming from distant objects, acting as lenses that, for instance, help planet hunters to find alien worlds around faraway stars.

Though Earth has a much weaker gravity than the Sun, technological advances have made it possible to confirm its uncanny effects closer to home. Spinning gyroscopes in orbit aboard NASA’s longest-running mission, Gravity Probe B, moved wobbled in a way consistent with Earth’s mass both warping the fabric of spacetime like a bowling ball on a trampoline and twisting it like a spoon twirled in honey. Here on the surface, the world’s most precise clocks, which keep time with vibrating atoms, tick slightly slower if placed on the floor instead of the table—thanks to the slightly stronger gravity on the floor slowing down time. 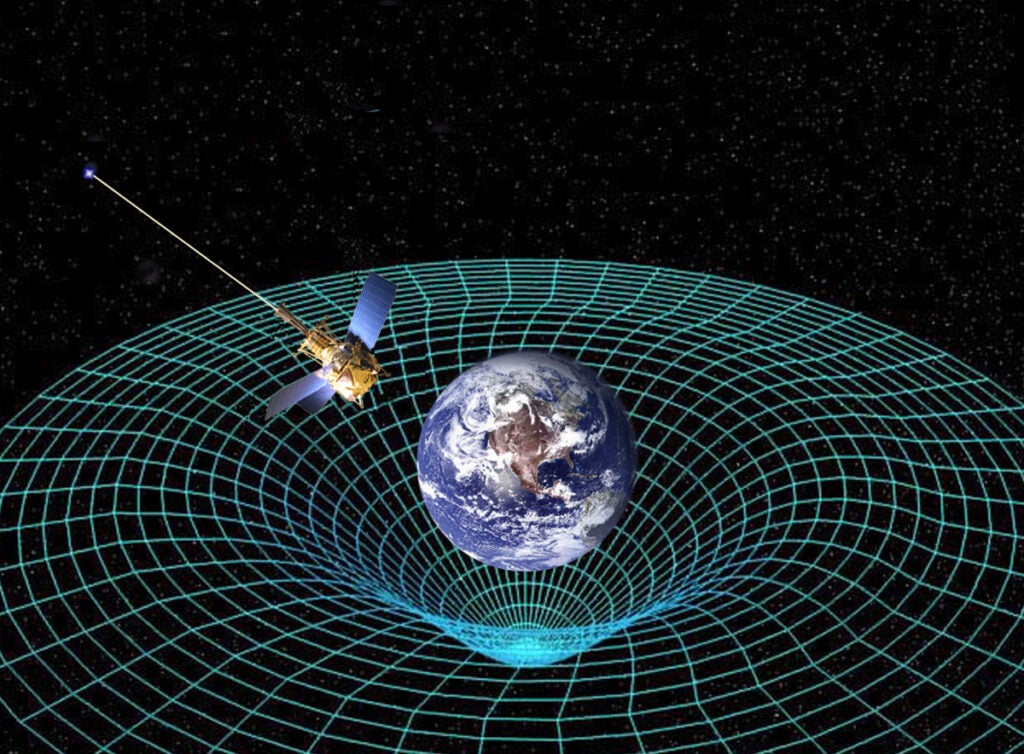 Illustration of spacetime warping around Earth

In this NASA illustration, the effects of Earth’s gravity can be seen warping spacetime in accordance with Einstein’s theory of general relativity. NASA’s Gravity Probe B spacecraft is also depicted.

Thwarted by planets and stars, those hoping to poke holes in Einstein’s theory have begun to look to uncharted water elsewhere in the universe.

“About 5 to 10 years ago, people started to realize that we needed to test general relativity at larger scales,” says Luca Amendola, a theoretical physicist at the University of Heidelberg.

New projects that will check relativity’s predictions for the structure of the universe itself include European space mission Euclid and the Large Synoptic Survey Telescope, which broke ground this year in Chile and will use a panoramic camera to photograph galaxies. 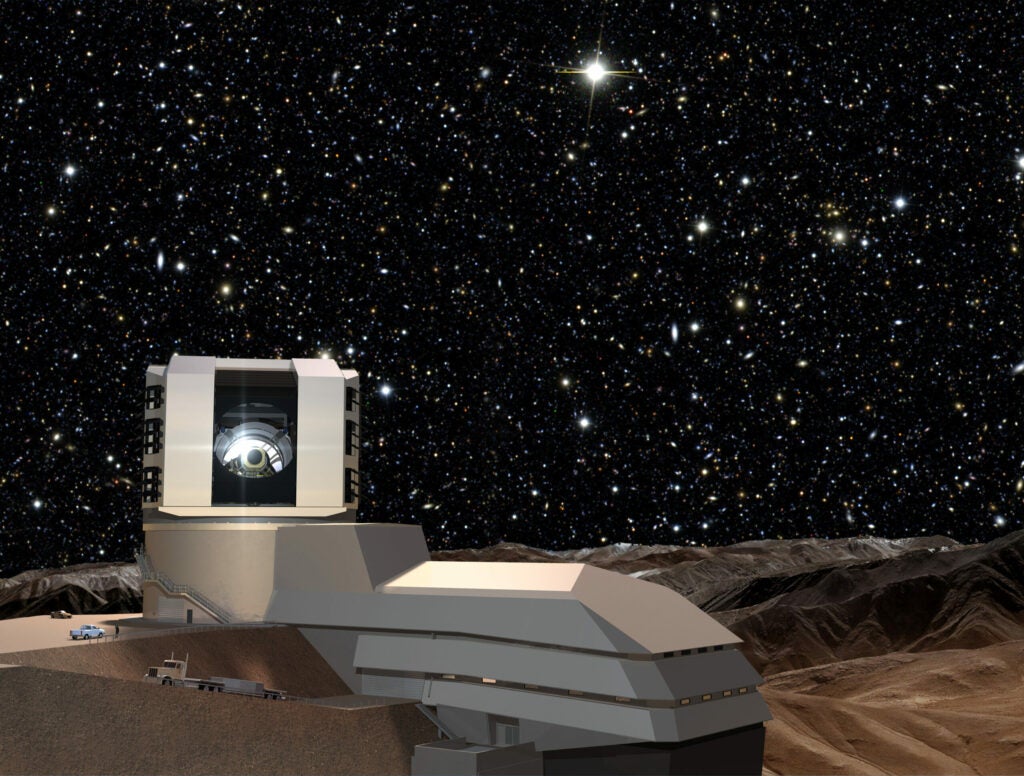 Artist’s illustration showing the Large Synoptic Survey Telescope currently under construction at Cerro Pachón, Chile. The reflecting telescope includes the world’es largest digital camera and will survey the entire night sky every three nights for 10 years in an effort to understand its structure.

Others are focusing on the most gravitationally awesome objects in the universe: black holes.

“We want to test gravity in different regimes,” says Dimitrios Psaltis, an astrophysicist at the University of Arizona. “We want to see if we can find evidence of new physics that appears beyond some threshold.”

Psaltis has joined an international team of astronomers watching the black hole that lives at center of our galaxy. The black hole itself is invisible; its gravity is so strong that nothing crossing its event horizon, including light, can escape. But just outside of the event horizon lies a hazy ring of light and radio waves given off by dust falling into the black hole.

Nearly a dozen telescopes on four continents are tuning in to those radio waves to check whether that ring has the size and shape predicted by general relativity. Synchronized with atomic clocks, the network functions as one giant virtual telescope: The Event Horizon Telescope, which stretches from Spain all the way down to the newest member of the collaboration that joined this spring, the South Pole Telescope.

A European space mission due to launch this month also has black holes on the brain. Called LISA Pathfinder, it will try out technologies destined to fly on a 2034 mission, eLISA, that will check out what happens when two black holes orbit each other. 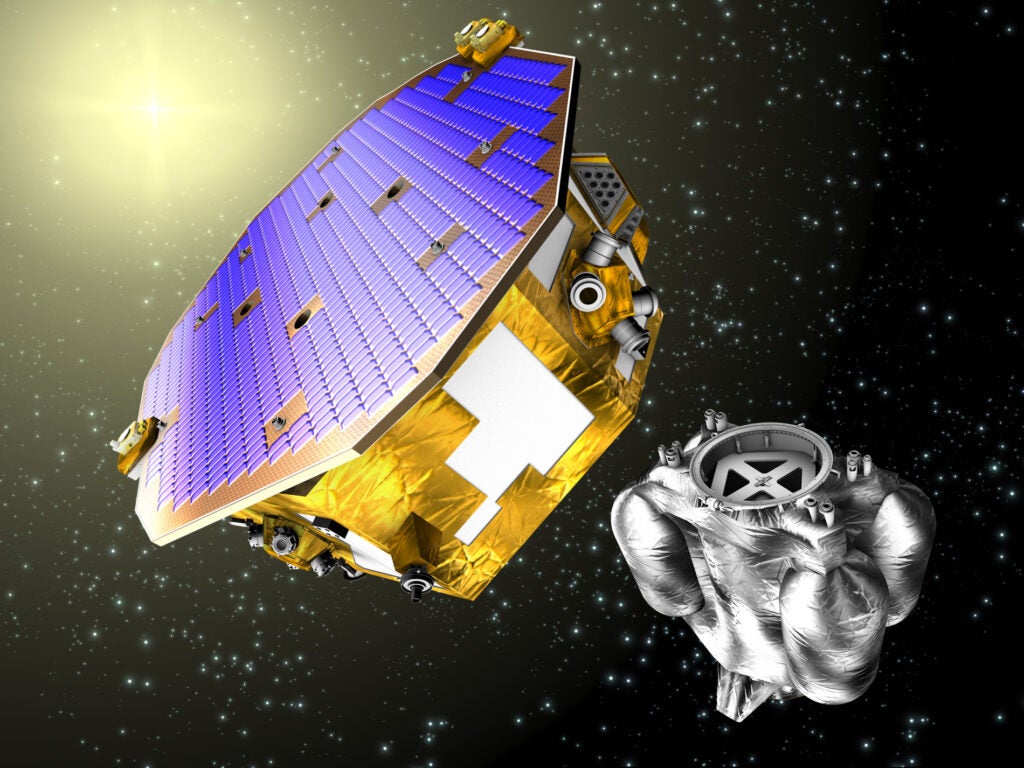 Artist’s rendering of the LISA Pathfinder spacecraft, which will test the concept of low-frequency gravity waves.

General relativity predicts that such couples should create waves in spacetime that ripple outward, causing objects to expand and contract. LIGO, a ground-based instrument recently upgraded in September, has been trying unsuccessfully to catch those gravitational waves for years. eLISA will cast its net using three sets of free-floating objects.

In the quiet of space, the distance between those objects, as measuring by lasers that link the three spacecraft carrying them, should change slightly if a wave from two black holes in two merging galaxies passes by.

“LISA should see a few tens of these merger events over the length of the mission,” said Jonathan Gair at the University of Cambridge.

Catching a wave would not necessarily confirm Einstein’s theory; it must change distances only in directions perpendicular to the wave itself. Otherwise, physicists will need to go back to the drawing board.

Theorists can tell us little today about what new physics would be needed if any of these projects finds something strange. They will continue to play with their toy theories—refining and revising the math and throwing out ones that have problems—in the absence of an evidence to justify them. But they will dream of the day that the data challenges Einstein. Until then, his theory of gravity will continue its now-century-long reign.