Is Warp Speed Possible? We Ask a String Theorist

We start in the future. An alien time-travels from that future's future and alters key events. In the resulting past, we watch Kirk and crew come together as younger, better-looking space adventurers. In the future. Geek Candy: Artificial gravity, a new spin on teleportation, phasers and a black-hole bomb. Oh, and Kirk gets into a bar fight — possibly with aliens. EGQ: Off the charts. This franchise practically invented tech gibberish, or Treknobabble, and the writers have promised plenty more. In theaters: May 8. Courtesy Industrial Light & Magic/Paramount Pictures
SHARE

Science geeks, Trekkers, and action-movie fans have now had a few days to digest the newest incarnation of the Star Trek franchise. PopSci set out to answer some of the movie’s most puzzling questions (aside from what Winona Ryder was doing on Vulcan): Can we time-travel through black holes? Can we seed said black holes using something called “red matter”? How about teleportation — will someone named Scotty (or Chekov) ever beam someone up?

To get a better grasp on these seemingly impossible concepts, PopSci talked to Michio Kaku, co-creator of string theory, professor, author and, of course, Star Trek fan. Kaku’s latest bestseller, Physics of the Impossible, has entire chapters devoted to Star Trek lore like phasers, force fields, and time travel. A TV show with the same name will debut this fall on the Science Channel.

According to Kaku, science fiction is often prescient. He believes scientists might one day create laser (or phaser) guns powered by nano-batteries or nano-capacitors, for instance. And he doesn’t rule out warp-speed travel.

This really isn’t too far-fetched; there have been many instances wherein fiction fertilizes real discoveries. Jules Verne’s 20,000 Leagues Under the Sea inspired American Simon Lake to invent the submarine, for instance. In H.G. Wells’ 1914 book The World Set Free, a scientist unlocks the secret of atomic bombs in 1933. The Hungarian physicist Leo Szilard read that book in 1932 and made the discovery his goal. In 1933, he figured out the chain reaction process. And when the U.S. created its first reusable space ship, we named the prototype the Enterprise.

There are a few spoilers ahead, so consider this fair warning.

PopSci: Let’s talk about some concepts that are familiar in the show and that you talk about in your book, like teleportation. There is a scene in the movie where Kirk and Sulu are falling without a parachute, and they have to be beamed up; Chekov decides he has to do it manually. Unlike “The Next Generation,” which had “Heisenberg compensators,” the movie doesn’t mention the Heisenberg uncertainty principle (the more precisely you locate the position of a particle, the less you can know about its momentum.) I know there has been success in teleporting atoms, but will we ever be able to teleport a human?

Michio Kaku: Well, quantum teleportation already exists. For the past 10 years, we’ve been teleporting photons as well as atoms of cesium and rubidium and terbium. The world record is 1,800 feet, across the Danube River. I suspect very soon that we will be teleporting molecules. I wouldn’t be surprised if, in the coming decades, we are able to teleport DNA, or maybe even a virus. But beyond that, it starts to get very difficult. You have to entangle two atoms, they have to vibrate in unison, and that is very difficult beyond the molecular level. But, Star Trek takes place in the 23rd century, so maybe by then we can teleport 100 trillion cells, which is about the number of cells in a human body. 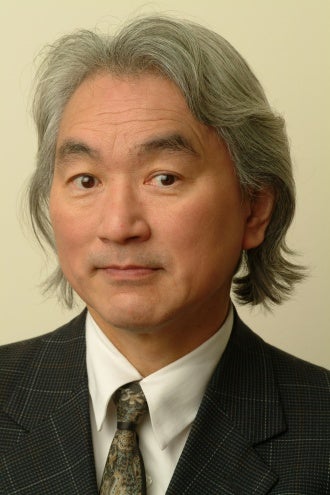 In the entanglement process, is the initial piece of matter that you are teleporting destroyed or changed in some way? What would happen to a person?

You have to have a carbon copy waiting for you; you can’t be beamed to the surface of a planet. And the information content of the original gets destroyed when you beam the information over to another place. You are destroying the original to reconstruct it somewhere else. Well, then you begin to ask the question, who is this copy over there? All the atoms and cells get destroyed; you’re dead. But somebody over there has emerged who is identical, atom to atom, to you. Well then it raises the question, who are you? Are you your body and all your neurons, or are you just information that can be transmitted across a room? Is there a soul? It raises all sorts of questions.

The movie makes frequent use of black holes. Future Spock, or old Spock, travels through one after he fails to save a planet from being blown up by a supernova, and he winds up 130 years in the past. Events change that alter the course of history as we know it for the Enterprise crew (which will be handy for sequels.) But my understanding of physics is that it’s not possible to go through a black hole and come back out, at least in one piece?

Yes and no. There is a debate about this question. If you have a spinning black hole — and all the black holes we’ve seen in space are spinning very rapidly — then the math says they collapse to a ring, not a dot. If you fall through the ring, you wind up in a parallel universe. This solution was first found by Roy Kerr in 1963, and it is the most realistic description of a spinning black hole. There are many, many questions raised by this. If you could go through the ring, then who knows where the other universe is located? It could be backwards in time, it could be a parallel universe. But there are problems like radiation. The radiation would be very intense. And if you add radiation, there is a debate among physicists right now about, will it close up the wormhole, is it stable? Math says there is a wormhole at the middle of a spinning black hole. To keep the hole open so you can go through it, you need negative matter to stabilize the black hole. These are called transversable wormholes; you can go back and forth freely without too much effect.

Negative matter meaning antimatter, or something else? 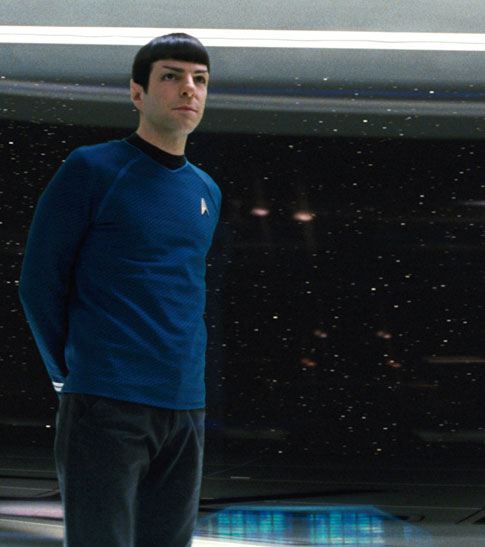 There was another issue about black holes in the movie — the characters create one using “red matter.” Is there any theoretical basis for “seeding” a black hole, to start one from scratch?

In the movie, Romulans put red matter in Vulcan’s core and it creates a singularity that leads to the creation of a black hole; all the mass of the planet becomes the black hole. That made me think of the Large Hadron Collider and some of the concern last summer about mini black holes gobbling up the Earth.

Oh, cosmic rays give you more energy than the Large Hadron Collider. It is a pea-shooter compared to the humongous energy that cosmic rays have. The Earth, for billions of years, has been bathed in cosmic rays, much more powerful than anything created by the LHC. I don’t think the LHC will create anything at all, any mini black holes. By nature standards, it’s puny.

When Vulcan consumes itself in a black hole, Spock is watching from a distance that seems like it would be about as far as the Earth is from the moon. Is that a safe viewing distance?

If you enter a black hole and you fall through a wormhole that is somehow stabilized, wouldn’t you still be spaghettified by the tidal forces?

We all know the Enterprise travels at warp speed. Will it ever be possible to travel at “warp factor 4”?

We physicists used to laugh at Star Trek‘s warp factor. We don’t laugh anymore. About 10 years ago, a Mexican relativist named Miguel Alcubierre was watching Star Trek, and he came up with a new solution to Einstein’s [general relativity] equation. The loophole is negative matter — Einstein never considered it. And Alcubierre got a solution that looked very similar to warp drive. The key is, you don’t go to the stars, the stars come to you. Everybody assumes you have to go to the stars, which means you have to break the light barrier and violate the laws of physics. But you can compress the space like an accordion — compress the space between you and the stars. It’s like a wrinkle in space. There are some objections to this, of course. We don’t have negative matter, for instance. But in principle, if you have, let’s say, a meteorite made of negative matter, then it may be possible. Einstein never said that nothing can go faster than light. Empty space can contract or expand faster than the speed of light. That’s the Big Bang. It’s emptiness that expanded. It looks very similar to the rendition of warp drive in the movies — you would see distortion of star light, stars would come at you very fast, but inside you feel nothing.

What about weapons? Could we ever create a ray gun or phaser small enough to put in a space holster?

We already have ray guns that are powered by nuclear power plants, which are very powerful lasers. But in a firefight, you don’t want to put a nuclear power plant on your shoulder. The problem with jet packs and ray guns is always a portable power pack. Well, people say, we could use batteries. No — these batteries don’t exist. That’s why jet packs only last a few minutes. That’s why a lot of the stuff you see in the movies is not possible today. With nanotechnology, I do believe we will be able to create powerful batteries. It’s like with gasoline. Pound for pound, gasoline has more energy than a battery. Why? Gasoline is concentrated sunlight. It’s sunlight concentrated from the dinosaur era, and it’s concentrated on a molecular level. In a battery, it’s a fluid. You are not storing energy on a molecular scale. But there’s no reason we cannot create a nano-battery. Take a capacitor, which is nothing but two parallel plates that store charge. You can store vast amounts of charge in a capacitor. In the future we might be able to make nanoplates and store vast amounts of energy on them. Maybe then, laser guns will be possible.

Do you think Star Trek will inspire people to figure these things out, a la Jules Verne and H.G. Wells?

These are technical problems. I suspect by the 23rd century they will solve many of these problems. There are no laws of physics that prevent most of what you see in the movies. It’s just an engineering problem.

We physicists don’t like to admit it, but some of us are closet science fiction fans. We hate to admit it because it sounds undignified. But when we were children, that’s when we got interested in science, for a lot of us. When I was a kid, I watched Flash Gordon. Eventually I realized, I didn’t have big muscles, I didn’t have long hair, but it was the scientists who made the whole series work. I was fascinated by that. Here was a man who, just by thinking, could create starships and cities in the sky.

So, these are impossible technologies, but impossible today and maybe possible in the future.