In Defense of the LHC

As the Large Hadron Collider readies to be fired up in Geneva, Physicist Brian Cox explains what it might reveal about the workings of the Universe—and why the grandest scientific instrument ever built is well worth the $6 billion investment 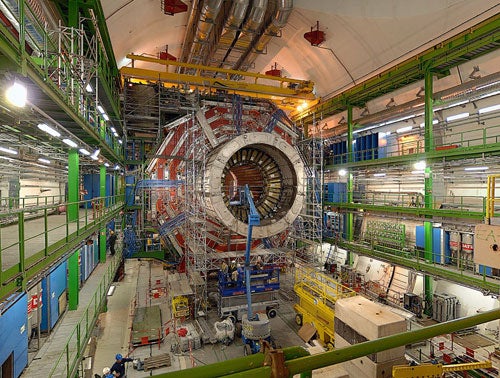 Today’s most ambitious scientific instruments are modern-day cathedrals in their size and complexity, if not in their purpose—these are, after all, structures built to shatter worldviews, not to reinforce them. And the grandest of all, pictured on these pages and fired into action today, will take us on a journey to one of the least-accessible places imaginable: the realm of quantum particles, less than a billionth the size of a single atom.

This is CERN’s Large Hadron Collider, the most magnificent scientific instrument ever constructed. Nearly 17 miles in circumference, buried 300 feet below the city of Geneva and a succession of picturesque French villages, and costing in excess of $6 billion, the LHC will be a window onto a profound and unexplored world that we hope will hold the answers to some of the biggest possible questions: What are we made of? Why are we here? And how could objects as marvelously complex as human beings evolve to ask these questions in such a violent and inhospitable universe?

The LHC is designed to recreate the conditions that were present in the universe less than a billionth of a second after the big bang—and to do so again and again, up to 600 million times a second. It accomplishes this by accelerating protons, the atomic nuclei of hydrogen atoms, so close to the speed of light that they zip around the 17-mile ring 11,000 times a second, before colliding head-on with another beam of protons traveling in the opposite direction. Four giant experiments, ATLAS, CMS, LHCb and ALICE, “photograph” the resulting miniature “big bangs.” I work with more than 2,000 other physicists from 37 countries on ATLAS, a detector that’s been built from more component parts than a space shuttle and that fills a subterranean cavern bigger than the nave of St. Paul’s Cathedral in London. The scale, ambition and unique international cooperation at CERN make it one of the greatest human endeavours of this or any century.

But I’ve found that for many people the focus is not on the sheer audacity and majestic possibility of the LHC, but on the cost. I recently gave a talk about CERN that appeared on the Web and attracted plenty of comment in this regard: “Have we gone out of our freaking minds? How much did this thing cost to build? . . . Billions of dollars, no doubt, and for what? To collide two atoms in the hope of discovering a new particle . . .” In other words, can’t we do something more useful with that kind of money?

Let me answer with an emphatic NO. Finding out how our Universe works has never been a bad idea. In fact, it is the quest for a deeper understanding of nature that has given us everything we now take for granted in modern life. In an eloquent speech to the U.S. Department of Commerce in 1966, the theoretical physicist and then Philips research director, H.G.B. Casimir, pointed out that virtually all of the great discoveries of the 19th and 20th centuries came from curiosity-driven research. The transistor emerged from the quantum theory of solids, not from a desire to build computers and televisions. Radio waves were not discovered by men in government-directed laboratories in order to connect the world together with better communication systems, but by Heinrich Hertz, a man whose overriding concern was for the beauty of physics. In his speech, Casimir went on to list many of the great innovations of the mid-20th century—from nuclear power to automobile starter motors—and point out that none of them came about as a result of some kind of pragmatic process of innovation. The lightbulb, as the saying goes, was not invented through research and development on the candle.

It should not be surprising that a deeper understanding of nature leads to great benefits for humankind. History speaks for itself. So why, then, could anyone question the “benefit”
of projects like the LHC? I believe society undervalues exploration because searching for incremental solutions to pressing problems feels like a more pragmatic response to our problems than the quest for for a revolution. It feels like we know enough—and we should focus our energies on better exploiting what we know. But what is “enough”? If we had applied this logic to particle physics over the past few decades, then we would have no World Wide Web (invented at CERN in 1990), no medical imaging scanners (the P in PET scan stands for positron, an antimatter electron discovered in 1932 by observing cosmic rays) and no x-ray or chemotherapy treatments, all of which rely on miniature particle accelerators to create the short-lived radioisotopes required for medical use. The world would be a far less comfortable place because of the loss to medicine alone, and a poorer place for the loss to commerce.

Most importantly, though, the world would be truly impoverished without all the fundamental knowledge we’ve gained. And the LHC has been built to answer some very profound questions about the nature of matter. We know it will discover something because we have deliberately built it to journey into uncharted waters, reaching energies in its particle collisions never before achieved in Earthly laboratories (although routinely achieved by nature elsewhere in the universe—prophets of doom take note, we are not powerful enough to endanger the world with this thing by a very long shot!). 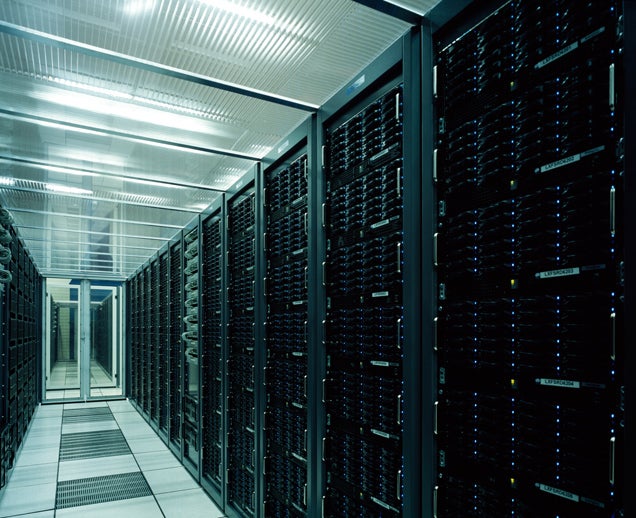 What might the LHC discover? Top of the list is the origin of mass in the universe. We strongly suspect that the particles that make up our bodies don’t just have mass—that is to say substance—but acquire it by some very subtle mechanism. The most well-established theory is the Higgs mechanism, which predicts the existence of one or more particles known as Higgs bosons that should be well within the reach of the LHC. We also hope to discover the nature of dark matter, which many theorists suspect consists of a new kind of subatomic particle that outnumbers the stuff that makes up the Earth, sun and all the stars in the sky by a ratio of 5:1. More speculatively, we could discover extra dimensions in the universe, revealing, in a Copernican revolution of unprecedented proportion, that we’re crawling around on a four-dimensional sheet in a perhaps infinitely larger multi-dimensional cosmos like ants on a piece of paper. And last, but hardly least, we could discover something so strange and, possibly, so useful that nobody has yet thought of it.

I accept that we scientists will always be called upon to justify our voyages of discovery in economic language simple enough (dare I say it?) for politicians to understand. Sometimes, however, we should also be brash and bold and defend the search for knowledge simply because it is a noble cause in itself. The great physicist Robert Wilson, founder of the Fermi National Accelerator Laboratory in Batava, Illinois, which houses the world’s most powerful particle accelerator (until the LHC switches on), was once asked by Rhode Island senator John Pastore about the value of Fermilab in support of national defense. “It has nothing to do directly with defending our country,” replied Wilson, “except to make it worth defending.”

Exploration always delivers, because striving to gaze over the horizon is the only route to progress. If our ambition fades, then our position in this dangerous and beautiful universe becomes more precarious. Let us, therefore, celebrate the endeavors of big science, marvel at its machines, and await its discoveries with wonder in our eyes—and not with our hands tightly clasped around our wallets.

Check out our exclusive portfolio of LHC images here.

See all of PopSci‘s coverage of the Large Hadron Collider at popsci.com/lhc. 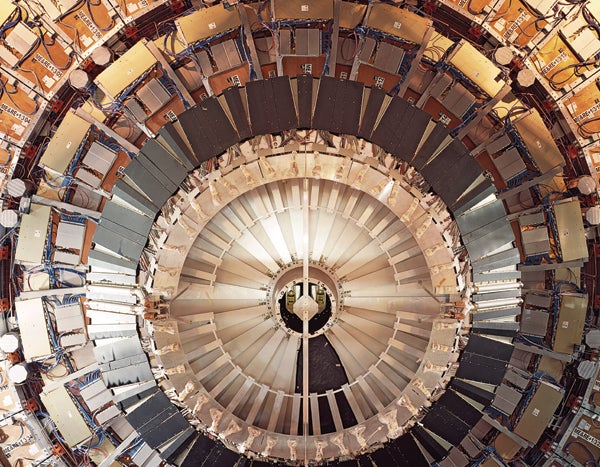 The electromagnetic and hadron calorimeters that make up the center of the 49-foot-high, 69-foot-long CMS instrument.

How Heavy is “Heavy”?

The LHC beauty (LHCb) experiment is designed to explain why there is more matter than anti-matter in the universe. To do that, LHCb looks at bottom-quarks—superheavy particles four times the mass of a proton—thrown off in proton collisions. The calorimeter [at right] measures the energy of particles escaping from the collision, which helps determine their identity. 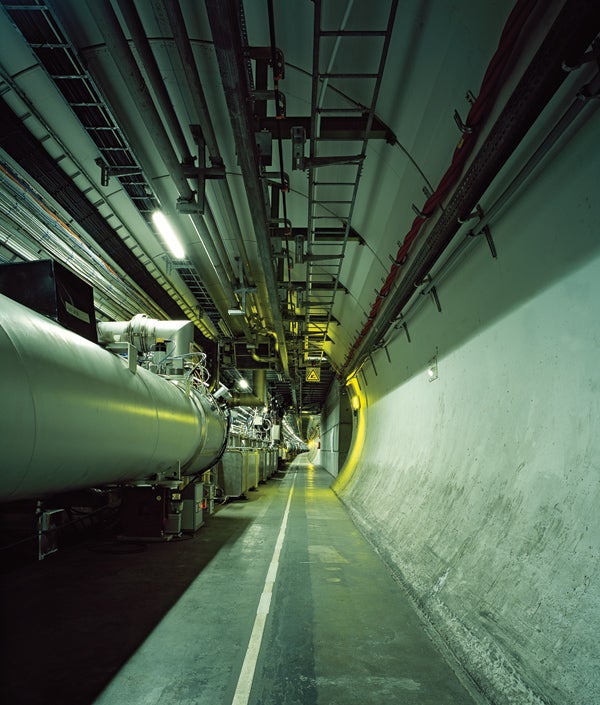 Where the Magic Happens

Located between 160 and 500 feet underground, a 16.57-mile-long chain of magnets guides the proton beams to the four experiment stations. The tunnel was originally dug for an older accelerator called the LEP, which was dismantled by 2001 to make room for the more powerful LHC.

Another component of the LHCb experiment is the tracking system. The inner tracker uses a silicon strip to detect particles, while the outer tracker uses tubes of gas. Together, they monitor the paths of the particles as they fly out of the proton crashes. By combining data about the particle velocity along those paths with the energy data from the calorimeter, the researchers can determine the mass and identity of particles flying out of the accelerator. 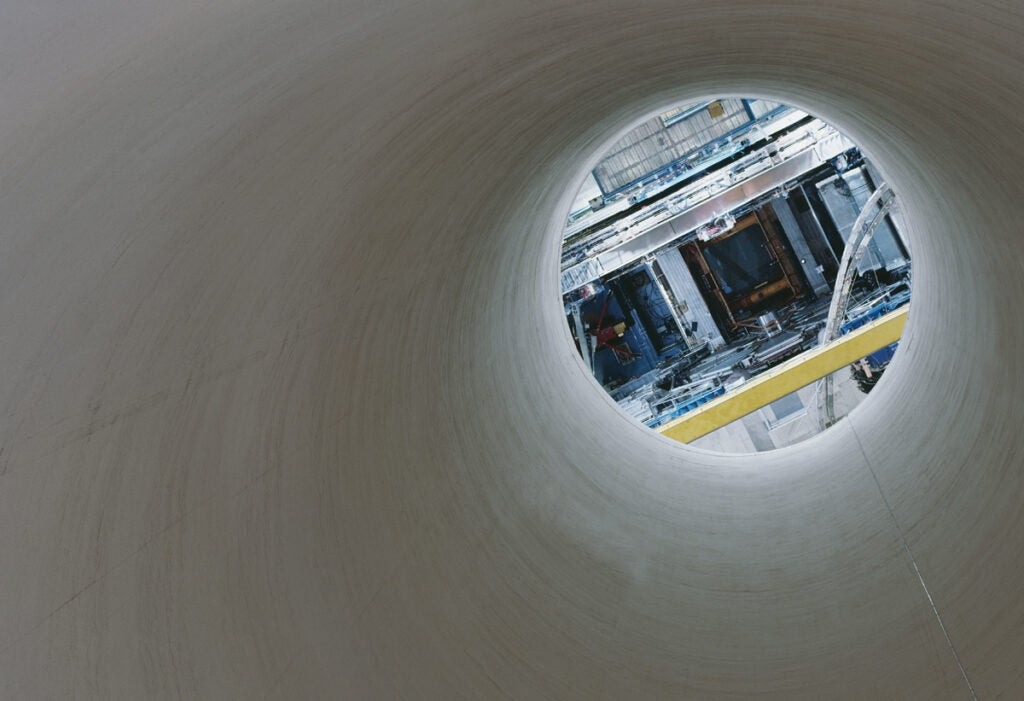 Into the Physics Cave

The LHC’s six experiments are located deep beneath the Earth’s surface and insulated from a world rife with radioactive interference, making it no easy feat to load all of the enormous equipment into place. The components for each experiment were lowered hundreds of feet below ground through giant tunnels like this one. 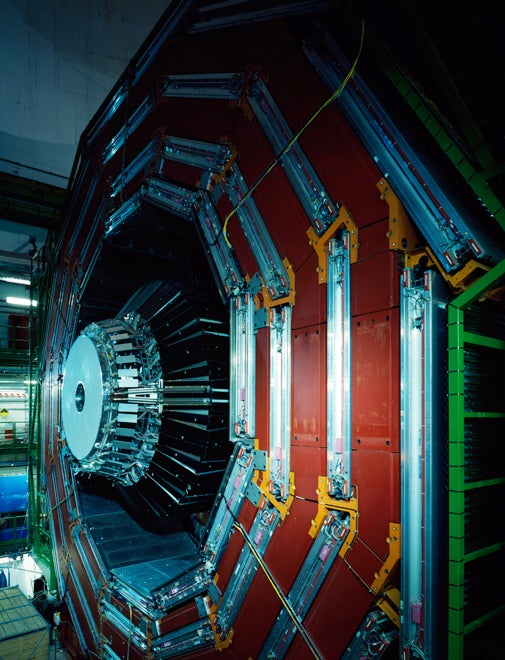 Behind the Scenes WIth the Photographer

During his three-day shoot, New York–based photographer Enrico Sacchetti observed more than just the LHC. He was also witness to the international community of scientists that walk the halls of the largest experiment in human history. “They feel like they’re on a quest for mankind,” he says. From the nights out in Geneva to the cliques in the cafeteria, the researchers from around the world gather by project, each group pursuing their research with a sense of competition usually reserved for the football field. See all of PopSci‘s coverage of the Large Hadron Collider at popsci.com/lhc.
Particle Physics
Physics