Looking to build a time machine but nervous about the classic grandfather paradox, aka the Marty McFly conundrum, aka the... 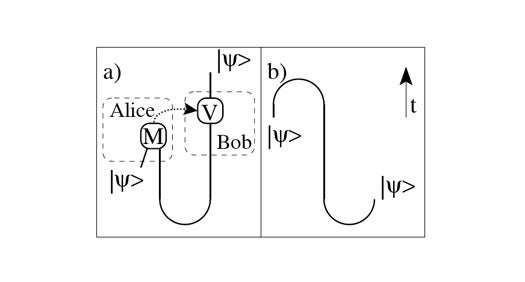 Looking to build a time machine but nervous about the classic grandfather paradox, aka the Marty McFly conundrum, aka the idea that you might unwittingly do something that causes you to never exist in the first place? An MIT professor and a few of his quantum quoting buddies have published a theory that allows for time travel while circumventing the grandfather paradox. All you need is a quantum teleportation device and a precise understanding of the idea of postselection–Flux Capacitor optional.

Quantum mechanics seems to allow for such simultaneous computations of all possible outcomes theoretically, though actually making it happen is another issue altogether (such quantum computing would blow conventional computing methods out of the water). But combined with quantum teleportation – using quantum entanglement to reproduce a quantum state in space that previously existed at another point in space – MIT’s Seth Lloyd and colleagues say you can theoretically teleport a particle back in time.

This form of theoretical time travel solves two major problems associated with the feat. For one, it doesn’t require the bending of spacetime as most time travel theories do. Considering the conditions necessary to bend the fabric of spacetime might only exist in black holes, that’s a good thing. But further, due to the probabilistic laws of quantum mechanics, anything this method of time travel allows to happen already had a finite chance of happening anyhow. That means a particle can’t really go back and accidentally destroy itself.

Of course, the physicists didn’t demonstrate their theory in hopes of going back in time to ensure their parents end up getting married or some such. They’re hoping that by demonstrating these properties they will help push quantum thought toward a theory of gravity. But the idea of moving backward along the timeline without bending the fabric of the universe – or altering ones own future existence – is pretty amazing. If your interest is piqued, you can check out the entire paper here.