Using materials analogous to different space-times, scientists might be able to create a toy "big bang" in the laboratory 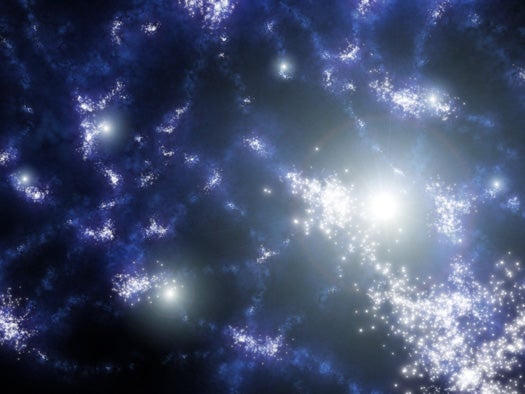 For all the visualizations, artist’s renderings and animations of the birth of our universe, it is still exceedingly hard to imagine the Big Bang: from nothing emerges everything.

But what if you could create a big bang on a lab bench — make a model of the universe’s emergence. University of Maryland engineering professor Igor Smolyaninov has proposed just that, describing the opportunity to create a “toy big bang” using precisely designed metamaterials that are mathematically analogous to certain conditions of the real-world big bang.

Metamaterials are artificially engineered structures made to embody properties not always possible in nature. Specifically, some metamaterials can reproduce the behavior of light in a variety of spacetimes unlike the dimensions we perceive in the world (with two dimensions of space and two of time, for example). Because light moves in a metamaterial the same way it would move in a certain spacetime, we can see a representation of what might happen in such a spacetime by dealing with the metamaterial instead.

Smolyaninov gives a mathematical demonstration that one metamaterial — representing two space dimensions and two time dimensions — could undergo a phase transition leading to the equivalent of a sudden reduction to only one time dimension and the creation of lots of particles. In effect, it would be like a model Big Bang — the creation of a new 2,1 spacetime and a bunch of matter.

[via The Physics arXiv Blog]