Long Tails May Save Luna Moths From Hungry Bats [Video]

A new reason to shake your tail feathers 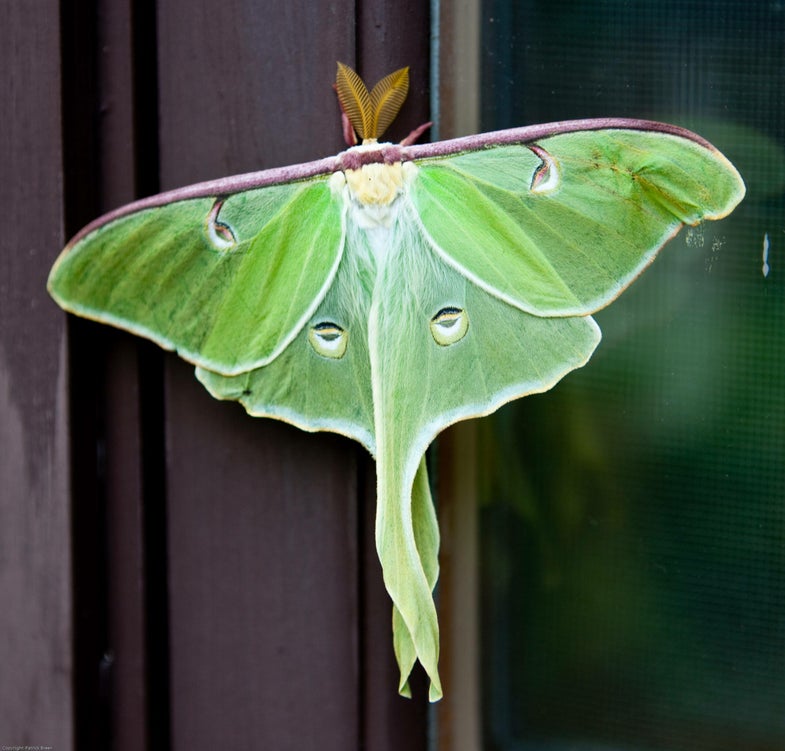 For butterflies, distinguished wing markings can be great for confusing predatory birds, either by scaring them or by luring them away from vital body parts. Now, it turns out that moths, the nocturnal cousins of the butterfly, may use a similar strategy to deflect attacks. But since moths’ predators rely more on sound than sight, some moth species seem to create acoustic signatures that confuse bats.

Trailing behind its hindwings, the luna moth has two tails that extend for about an inch and a half. For a while, scientists weren’t really sure what purpose they served, since the moths can fly fine even with the tails removed. Back in 1903, one scientist proposed that the tails might serve as a diversion–that perhaps they create an acoustic signature that looks like wings in a bat’s echolocation, luring the attack away from the vital areas and out toward the disposable appendages. A paper published this week in Proceedings of the National Academy of Sciences provides the first evidence in support of this theory.

Video: Scientists think the luna moth’s flopping tails may look like wings in a bat’s sonar, serving as a decoy target.

To put the theory to the test, a research team from Boise State University, University of Florida, and Northeast Ohio Medical University pitted 162 luna moths against eight brown bats. Half of the moths had their tails removed. In a dark room, the researchers used fishing line to string moths from the ceiling, three at a time: a luna moth with its tails intact; a luna moth with its tails removed; and a moth from a tailless species, as a control. Then they set a bat loose, while high-speed infrared cameras and ultrasonic microphones recorded the interactions.

Video: When bats aim for the luna moth’s tails, the moth escapes 96 percent of the time.

Another possibility is that some moth species developed tails as a result of sexual selection—that is, females thought the tails were attractive, so males developed longer and longer tails over time. This hypothesis is less likely, the researchers say, because nocturnal moths don’t typically use visual cues to choose mates, and because the females are not particularly choosy; they usually mate with the first male that finds them.

Doing a phylogenetic analysis, the researchers found that tails evolved independently four different times across several clades of moths, underlining the importance of the mysterious appendage.

Up next, the researchers are interested in comparing these different clades of tailed moths, to see if moths with longer tails are better at evading capture and damage than the moths with shorter tails.