Inside the mad (food) scientist's lair. 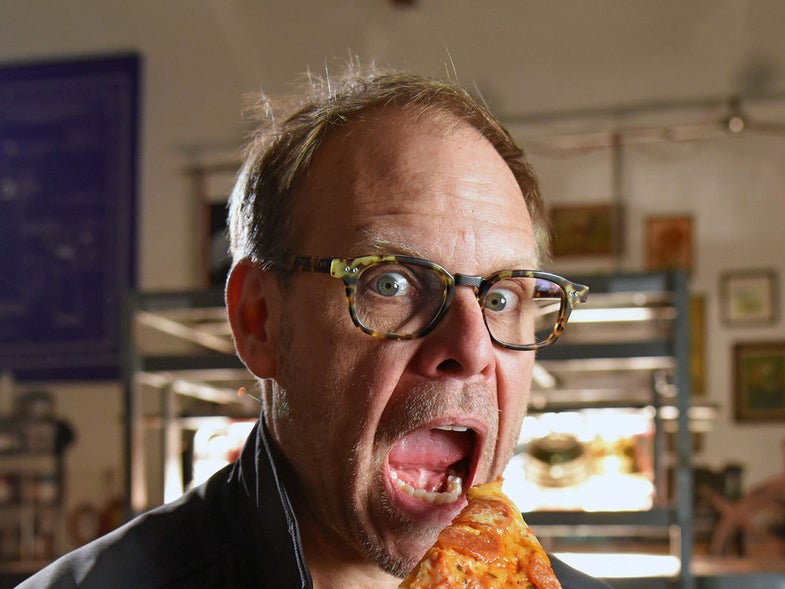 Food Network star Alton Brown began hacking (he prefers the term “hacking” over “inventing”) on his food-science show Good Eats. During season one (which aired in 1999), he made an inexpensive fish smoker out of a cardboard box. Since then, his hacks have grown in size and showmanship. Brown’s Mega Bake oven uses 54 one-thousand-watt lights to cook a pizza in three minutes, and his Jet Cream makes carbonated ice cream in 10 seconds using two fire extinguishers—one filled with CO2 and the other with a “top secret” chocolate cream mixture. The Mega Bake and Jet Cream were the stars of Brown’s first national culinary variety show tour, the Edible Inevitable tour. Brown has big plans for 2016, including releasing a new cookbook called EveryDayCook and embarking on a second national culinary variety show tour, the Eat Your Science tour, beginning in April in Charleston, South Carolina. In the meantime, Brown took a few minutes to talk with us about his inventions.

Popular Science: When did you start inventing?

Alton Brown: I don’t think of myself as an inventor, I think of myself as a pretty good hacker. I almost always use what’s around and available and adapt it. That began pretty early on in the making of the show Good Eats, when I wanted to figure out ways of getting around something or doing something better. I stacked steamer baskets on a central spindle and invented the thing we call the “steel lotus” and created the Turkey Derrick for safely frying turkeys. It’s all problem solving.

Why do you enjoy hacking?

A hack is a celebration of a certain amount of acquired understanding. When you understand a problem in a certain way and can find a way to fix it, there’s great joy in that.

Do you have a hack you’re particularly proud of?

The Mega Bake is a great piece of engineering, but in the end it’s just a really big EZ-Bake oven. I’m most proud of the Jet Cream, because nothing like that exists. It’s a few water bottles from Office Depot, a few clamps, and a couple of fire extinguishers. There is no precedent for it.

What do you think has made hacking and inventing so popular over the last few years?

Part of the movement is about having control over something in your life when there are so many things we can’t control. And also realizing that there are now all these technologies that do allow us to do things, and make things, and express ourselves. My dad was a really great woodworker—I’m not. When he died I looked for a way to express my manual skills. It just so happens I rediscovered the kitchen that way. If I’ve done anything in the role of cooking it is helping guys to understand ‘Hey guess what, the kitchen’s a place where you can express those parts of you that used to be expressed under the hood of a car or making a chair.’

Do you have advice for kids or young adults who want to try and hack things?

Hacking’s the same thing as experimentation: You form a hypothesis, you gather data, you go through a scientific process. I think that experimentation is the finest expression of curiosity—trying to match what you know with what you can learn and what can be done. Innovation comes out of experimentation, and that’s what America is the best at. So what do I say in particular? Take apart the lawnmower. Build the jetpack. And don’t forget the kitchen is a laboratory and there’s one in every house.

Would you tell us a bit about the Eat Your Science tour?

I set out to do the first tour, four legs, to prove I can do a culinary variety show. Now I’ve got to do it better than last time, and that’s scary. It’s like “Gee, can you ever do anything like the Megabake again? And what about the songs?” The fact that I now am a professional singer, because I’m getting paid to do it, is amazingly hilarious, extremely surreal, and frightening all at the same time. Because on any given day I’m trying to line up shots, come up with recipes, and write lyrics for a funky song about cocktails.

When is your album dropping?

We’re talking about it. We’ve got 15 songs pretty much done and ready to go.

What have you learned from your musical experimentation?

I find that I get more laughs doing things acoustically. We had a punk song that we did called “EZ Bake”— an angry punk song about why I never got an EZ Bake oven as a kid. It was done like a Sex Pistols power punk song, but then I ended up doing it with just an acoustic guitar and it somehow got funnier. Now I’m always looking for the smallest way to do a song. This tour I’ve got a song about GMOs that’s actually a cowboy waltz. Don’t ask me how that came about.

What hacks do you planned for your upcoming tour?

We will have a very, very, very cold demo. Cryogenics are involved. And our hot demo—I will only say there will be lasers. But I’ve already said too much!

One day, to answer somebody on Twitter, I sat down and wrote something on a post-it note, stuck in on the screen of my computer, and took a photo of it. I just didn’t want to have to type 140 characters. And then all of a sudden, I was a renegade.

One of the nice things about it is that it’s absolutely personal. Yes, I have crappy handwriting, and I spell badly. But people respond to that personal attention, and I do enjoy that. There was a time I would have told you, ‘Social media? No freaking way.’ Yes way. It’s a matter of finding your voice.

Will we ever see an Alton Brown web series?

Every day, the number one thing I’m asked in social media is when are you going to do Good Eats again? I quit doing Good Eats because I was tired. I had done it for 14 solid years without stopping, and it was getting so big it was literally sucking my brain out of my nose. But I also felt a shift in media consumption, and I needed to see where that was going to go. Part of social media has been feeling out, “Is there an audience for that?” And the resounding answer is yes. So the only thing for me to figure out, other than when am I going to have time, is what avenue to take in delivering it. I’m not there yet, but that’s the goal.

Do you have anything else coming up we should know about?

We’ve been working very, very hard on a new book. It’s called EveryDayCook, and it will be out later this year. It’s really just the food that I like and cook and eat, but the groovy thing is that it’s been kind of an art project. We’ve done full-page spreads with photos for every single recipe, and we shot the entire book on an iPhone. That’s a first—nobody’s done that before.

What role do you think you’ve had in the rise of science?

It’s funny, when I started Good Eats, nobody was talking about science and food. And now that it’s a popular thing, I’d like to think I played some part in that. Not that I gave birth to molecular gastronomy or anything, but the whole notion of understanding what goes on with your food is more important than just following directions. I’ve been accused a few times of not being a “real scientist” because I do not have scientific degrees. I barely passed science in high school and college. So no, I’m not going to be receiving any grants to gene-splice pig kidneys into squirrels or anything, nor would I have any reason to do that. But I can help people understand how to make a better plate of eggs or a better steak. And by extension I would love to eventually move onto things that aren’t edible. Because it’s a big world, and I’d like to think that if I can understand it and get my head around it, I can find an entertaining way to get people to be interested in it and to learn about it.