U.S. Bank Stadium in Minnesota has interesting tech from its huge doors to its glass ceiling. 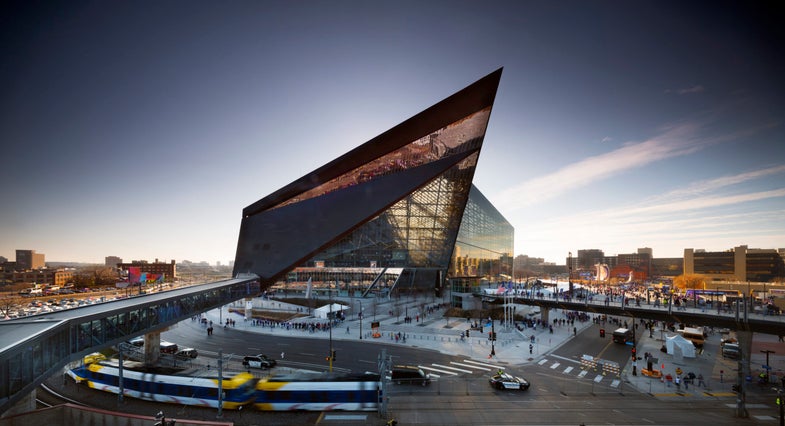 Almost every aspect of the Super Bowl has changed in its 51-year history. The first game, played between the National Football League and the now-defunct American Football League in 1967, was a relatively low-key affair. The teams battled it out on the Bermuda grass at the Los Angeles Memorial Coliseum. At halftime, there was nary a star to be seen; instead, two college marching bands performed. And the weather was one for the history books. Despite it being January, the open-air stadium was a balmy 72 degrees at kickoff.

Super Bowl LI will be rather different. On Sunday, the New England Patriots will square off with the Philadelphia Eagles on bright green turf. Justin Timberlake will perform. And all of America will be watching in HD. Most striking, however, will be the difference in venue. This year, the big game will be played at U.S. Bank Stadium, a futuristic glass shard in frigid Minneapolis, Minnesota.

John Hutchings of HKS Architects served as the principal designer for the stadium. While most people will be rightly focused on what’s happening on the field, he says the stadium is worth a close look, as it was designed with economics, enjoyment, and the Midwest’s unique environment in mind.

“We consider ourselves almost anthropologists,” Hutchings says of the architectural research process. “We get in and understand a given region or climate and all of the factors weighing in on a given location.” That’s why his team first looked at other construction in the Minneapolis-St. Paul region for inspiration.

They found it was dominated by striking Scandinavian design, with strong geometric shapes and a reliance on glass—all traits visible in the final stadium design. This was a departure from other NFL stadiums Hutchings has worked on. Lucas Oil Stadium, built for the Indianapolis Colts, is an expansive brick structure, designed to match the old industrial neighborhood in which it was built. And AT&T Stadium, with 100,000 seats and the spirit of the Dallas Cowboys, is the largest in the NFL, because, well, everything’s bigger in Texas.

Local aesthetics are an important consideration, but it was clear from the start that the real X factor in the Minneapolis project was the snow. From 1982 to 2013, the Vikings played in the Metrodome, which relied on an air-supported fiberglass fabric roof to keep out the cold. Almost from the moment the ceiling was raised, it was falling. The material tore and leaked; in 1981 (yes, that’s before it even opened), 1982, 1983, 1986, and 2010, it deflated like a busted balloon, dragged to the turf by the weight of recent snowfall. The new U.S. Bank Stadium was constructed on the same site and even uses some of the same hull at its base. But everything else had to be brand new and improved—especially the roof.

“We initially had a brief that required a retractable roof,” Hutchings says. “But as we began exploring the number of times a year in the Minnesota locale that the climate would afford them the ability to have the roof open, it was a very small number.” Instead of paying for a retractable roof that would rarely be used, Hutchings turned to ethylene tetraflouroethylene, more commonly called ETFE foil, to construct a permanent ceiling.

Used to great effect in the Beijing Olympics (remember that wild water cube?), ETFE is a thin, translucent material that can be layered to form a thin membrane that attaches to the building frame. Within “the plastic pillows,” Hutchings placed small cables that gave the roof a slight slope so that snow slides off into a supersized gutter. These innovations, along with a heating system just below the rooftop to melt additional snow and ice, keep the roof intact. Coincidentally, they also keep the stadium warm; while it’s a world away from Super Bowl I in California, Super Bowl LI in Minneapolis will also be 72 degrees come kickoff (at least indoors).

The roof’s not the only thing to ponder in between punts. The stadium also has the biggest hinge doors in the world. Five glass doors, each 55 feet wide and between 95 and 75 feet tall, line the western side of the stadium, near a three acre plaza where fans can congregate in warmer weather. “It seemed very logical to us that that operability on a very nice 72 day or 62 degree day would afford a unique experience,” Hutchings says. “It won’t be open for the Super Bowl, I promise you.”

As with many other facilities of its size, the $1 billion U.S. Bank Stadium had to be flexible enough for year-round use. Though it’s first and foremost home to the Minnesota Vikings, the stadium can also accommodate baseball, basketball, and soccer. “We actually have 32 rows on the north side that retract in order to give a big enough field to play baseball,” Hutchings says. “We were told that no one has done 32 rows that retract back.” But with the help of Irwin Seating Company, they found a way. “It also helps because a soccer pitch for a FIFA soccer game is wider than an NFL [field],” Hutchings says. If the facility manager pushes back just seven of the 32 rows, the Minneapolis stadium can easily accommodate a regulation FIFA pitch.

The building isn’t without its flaws—its enormous walls of glass kill a lot of birds, for one. But it’s serving its stated purpose well. “If you spend 1 billion dollars,” Hutchings says, “you want something that’s totally unique—totally bespoke.” As you’ll see for yourself on Sunday, that’s exactly what Minneapolis got.