Antarctic Birds Remember Which Humans Have Wronged Them

And they attack accordingly 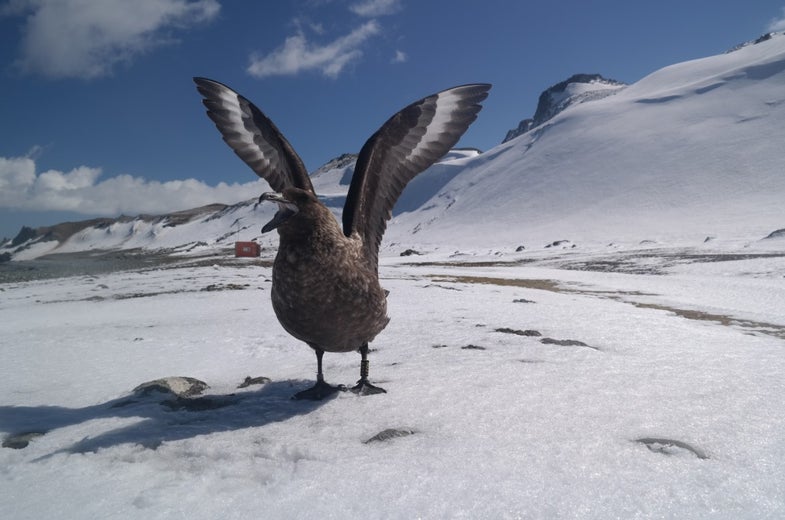 The brown skua bird lives in Antarctica, which means it doesn’t frequently come into contact with humans. But when researchers from South Korea were stationed in the Antarctic to study the species, they found that despite having limited exposure to humans, the birds could readily determine which humans had gotten too close for comfort to their nest and eggs. And then, the skua would attack accordingly. The researchers describe this phenomena in the journal Animal Cognition.

There are of course plenty of species that appear to recognize specific people. Even in the wild, birds such as parrots and crows have shown this discerning ability. But what’s interesting about the skuas, is that the bird lives far from human contact, and has only been exposed to people since research stations were set up on the continent. They were first set up sparingly in the 1890s, but the number of them across Antarctica significantly increased in the 1950s.

“It is amazing that brown skuas, which evolved and lived in human-free habitats, recognized individual humans just after 3 or 4 visits. It seems that they have very high levels of cognitive abilities,” one of the study researchers Won Young Lee, from the Korea Polar Research Institute said in a press release.

In order to test this, the researchers walked in pairs (one was a nest intruder and the other was a neutral person who hadn’t checked on the nests before). The two people then walked in opposite directions, and all seven of the pairs of skua parents focused on the intruder, trying to attack it, while leaving the unknown researcher alone. It’s unclear how exactly the birds are remembering which human is a threat and which is not, but it could be based on visual cues. Further research will aim to gain a clearer image of the species’ cognition.

You can watch a windy video of the experiment in action below.