Juno Mission Will Peer Beneath Jupiter’s Clouds In July 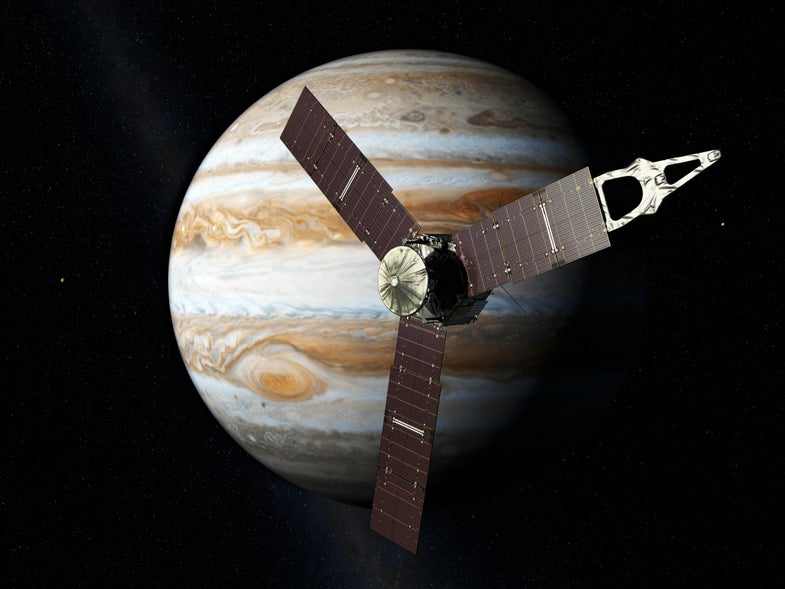 In Roman mythology, the lecherous god Jupiter is said to have drawn a veil of clouds around himself to hide his, ah, transgressions. Only the goddess Juno could peer through the clouds to learn what Jupiter was up to. In the same vein, NASA’s Juno spacecraft will give us our first good look below Jupiter’s thick shroud of clouds this summer. We probably won’t find a philandering deity down there, but the findings are sure to be astounding.

Blanketed in one of the solar system’s thickest atmospheres and wrapped a belt of extreme radiation, Jupiter is not an easy planet to study. A few NASA missions have photographed the planet as they zipped past, but only one has orbited the stormy planet. The Galileo spacecraft circled Jupiter at a distance of about 20,500 miles. Juno, by comparison, will come within 3,000 miles of Jupiter, giving us our closest-ever views of the gas giant.

The $1.13 billion spacecraft will enter Jupiter’s orbit on July 4, beginning a 20-month science mission that will explore how Jupiter formed, which tells us about how the solar system formed. That, in turn, tells us a bit about how humans came to be.

The largest planet in our solar system, Jupiter could fit more than 1,300 Earths inside it. It has more mass than all other planets and asteroids in the solar system put together, says Scott Bolton, principal investigator on the Juno mission.

Thought to be the first object to form after the birth of our Sun 4.6 billion years ago, Jupiter has a composition very similar to the Sun’s, except that the planet has more of the elements that are heavier than hydrogen and helium. “The stuff that Jupiter has more of is what we’re all made out of,” says Bolton.

“We don’t know how that enrichment happened or what the process was,” he says. Whatever that process was, it “eventually led to not only the creation of the planets and the Earth, but even life itself. So what we’re really trying to learn about is the recipe for solar systems. How do you make planets? Jupiter is a very important piece to that recipe because it represents the first step.”

Juno, which stands for JUpiter Near-polar Orbiter, launched from Earth in 2011.

On July 4, after firing its brakes for 35 minutes, Juno will catch up to Jupiter at a speed of 130,000 miles per hour, making it the fastest spacecraft ever to enter orbit around a planet.

During the arrival, the spacecraft will be 540 million miles from Earth. Since it will take communications signals 48 minutes to travel between Earth and Jupiter, the orbital insertion maneuver will be pre-programmed to proceed without human intervention.

Juno is equipped with three 30-foot-long solar panel arrays to power its 9 instruments, which will collect observations of Jupiter in the radio, microwave, infrared, visible, and ultraviolet wavelengths. It’ll also study the Jovian world’s magnetic field, which is 20,000 times as powerful as Earth’s.

In addition to looking for clues about how Jupiter formed, Juno will find out whether Jupiter has a rocky core, search for water in the atmosphere, and profile the planet’s winds, which can reach speeds of 425 miles per hour. It will also provide the highest-resolution images of Jupiter we’ve ever seen, and maybe solve some mysteries about the Great Red Spot–such as why it’s shrinking and turning orange.

A harsh belt of radiation lies around Jupiter’s equatorial regions, just waiting to damage a spacecraft’s intricate electrical components. To avoid this area as much as possible, the Juno team will put the spacecraft in an elliptical orbit around Jupiter.

Juno will orbit Jupiter 37 times, traveling a total of 2.2 billion miles from its launch to its final resting place. At the end of its mission, NASA engineers will send the spacecraft plummeting into Jupiter, so as to avoid contaminating its potentially habitable moons with Earth microbes. The spacecraft will burn up in Jupiter’s atmosphere.

That day will surely be a sad one, but it won’t happen until November 2018. The spacecraft still has a long and science-filled life in front of it, beginning with its arrival at Jupiter on July 4.

We’ll be covering Juno’s arrival at Jupiter and more–keep an eye on https://www.popsci.com/tags/juno/.