Why You Should Be Really Excited That Juno is at Jupiter 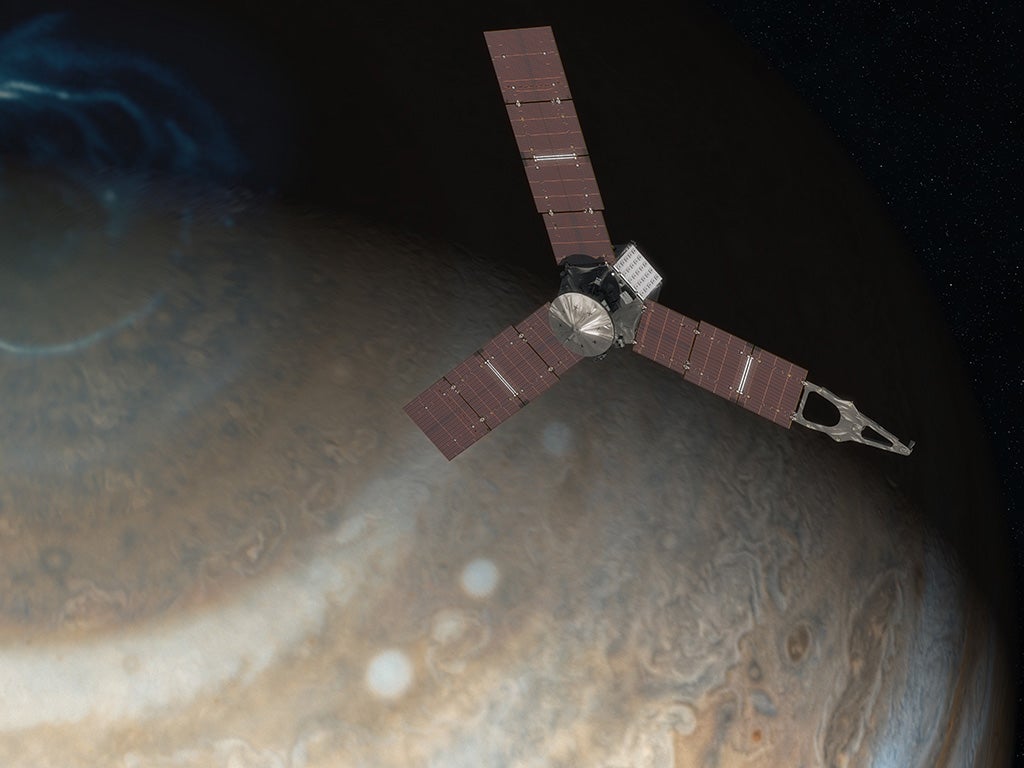 On July 4, NASA’s Juno spacecraft fired its engines for the 35-minute orbit insertion burn. The spacecraft’s nearly five year trek to Jupiter ended and its orbital mission began. It was an exciting moment for space nerds, but the casual observer might not have been thrilled. After all, we’ve been to Jupiter a number of times, and most people can recognize its characteristic red spot and know at least a little about its major moons. But as familiar as Jupiter might seem, Juno is only the second ever dedicated mission we’ve sent to the gas giant, this time around we stand to learn as much as Jupiter as how the elements for life ended up on Earth. 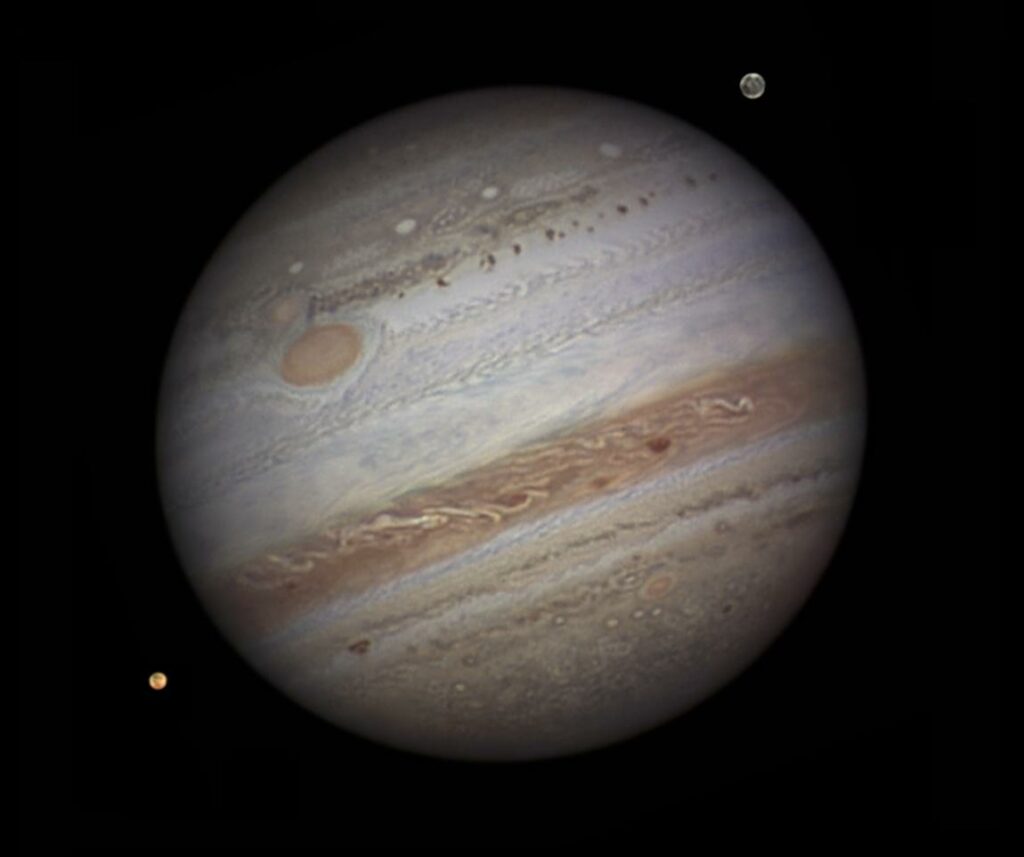 Jupiter as seen from the Earth.

Jupiter is huge, well big enough to spot with the naked eye in the night sky. Because of this, astronomers been studying it for millennia, though we didn’t really start learning about the planet until the 17th century when Galileo turned a telescope on the planet in 1610 and found it hosts multiple moons. At the time, this was compelling evidence in favour of a heliocentric rather than geocentric system.

Earth-based observations of Jupiter continued into the 20th century. Astronomers were able to resolve spots, colourful cloud bands moving around the planet, and even more moons. They also found of ammonia and methane in Jupiter’s absorption spectra and evidence of a formidable magnetic field around the planet. But Earth-based observations could only see so much. To really understand Jupiter, astronomers and scientists needed to take advantage of the burgeoning space age.

After the Soviet Union launched Sputnik, exploring space with satellites and probes moved from the realm of science fiction to science fact, though planetary science came later. The 1960s were dedicated largely to landing a man on the Moon, which meant the first probes were sent to explore our own satellite. Among the first American lunar launches was the retroactively names Pioneer 0. It launched on August 17, 1958, and didn’t get anywhere close to the Moon because its launch vehicle exploded.

The Pioneer program went on, and though later probes also failed to reach the Moon they did gather data on solar wind, radiation, and cosmic rays. Then the eleventh mission of the program did something different. It went to Jupiter.

Pioneer 10 launched on March 3, 1972, on a trajectory that would have it fly by Jupiter and then Saturn on its way out of the Solar System. Traveling at about 82,000 miles per hour, Pioneer 10 passed within 81,000 miles of Jupiter’s cloud tops on December 3, 1973. A year later, the twin Pioneer 11 spacecraft followed suit, passing just 13,005 miles above Jupiter’s clouds.

The Pioneers were the first to see Jupiter up close. It also gathered data. The Pioneer missions told us about Jupiter’s magnetic field, it’s tilt, its strong gravitational pull, the strong ring current distorts its magnetosphere, found that radiation in Jupiter’s environment is far greater than any radiation around the Earth, measured the depths of its cloud layers, and also found that Jupiter emits more heat than it receives from the Sun. These missions also found traces of a fine ring of particles around planet. All this was incredible, but it only scraped the surface. 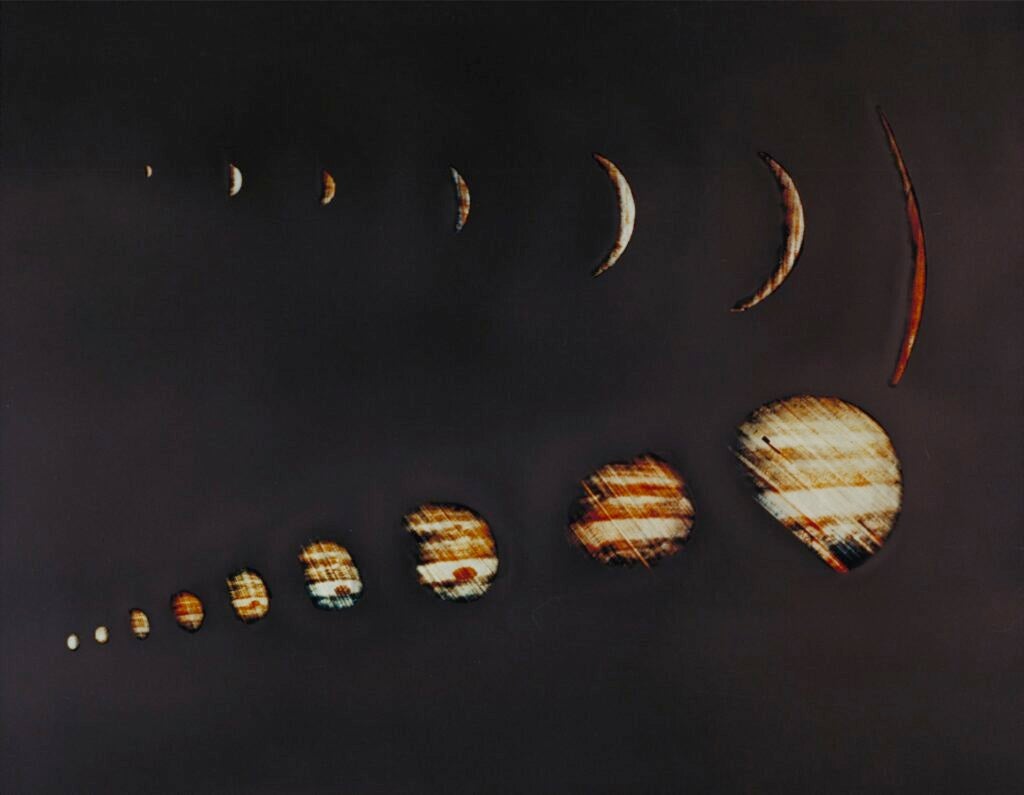 Even before the Pioneers reached Jupiter, NASA had approved the next major Jovian mission: another pair of flybys with the twin Voyager spacecraft as part of their Grand Tour of the Solar System. Nearly two years after launching in the fall of 1977, the Voyagers reached Jupiter. Voyager 1’s closest approach came on March 5, 1979, and Voyager 2 followed on July 9.

The Voyagers discovered 3 new Jovian moons, found auroral zones at the planet’s poles, and confirmed that Jupiter does have very scant rings. This mission also revealed that Jupiter’s moons are just as enticing as the planet. As Voyager 1 turned around the take a parting shot of the gas giant, it caught active volcanoes erupting on Io. Not only was there more to Jupiter, there was more to its huge system of moons, too.

The problem with Pioneers 10 and 11 and Voyagers 1 and 2 was that all these missions were flyby. Not one could stay, falling into orbit around the planet to really get a good look at the gas giant. That dream wasn’t realized until the 1990s with the Galileo mission.

Galileo launched in the payload bay of the space shuttle Atlantis and was released on a winding trajectory to Jupiter on October 18, 1989. This was a two-part. The probe was designed to fly right into Jupiter, sending back data on the planet’s chemical composition and atmospheric structure, heat balance, lightning environment, and movement of energetic particles along its upper cloud layers as it plunged to its death. The Orbiter would have a longer lifetime, studying the surface morphology, composition, and magnetic and gravitational fields of Jupiter’s moons to ultimately understand how the system as a whole works.

Galileo revealed a lot of things including an intense radiation belt about 31,000 miles above Jupiter’s cloud tops and winds traveling faster than 400 miles per hours in the atmosphere. It also found less lightning than expected, though what it did find was significantly more powerful than anything on Earth. Galileo also found Io was still volcanically active; its face had been resurfaced by erupting volcanoes since the Voyagers flew past it decades earlier. Galileo also evidence that Europa might have a subsurface ocean.

But Galileo also revealed that we really didn’t know Jupiter as well as we thought we did. The spacecraft found less water on Jupiter than the Voyager probes detected, which meant there was more to learn about its composition and makeup. This also meant that some leading theories about planetary formation were wrong, but without knowing what Jupiter was really made of there was no way to know which were right.

Sadly, Galileo couldn’t stick around indefinitely. Communications with the spacecraft ceased on February 28, 2003. The spacecraft came back to life briefly to transmit some final data as it plunged into Jupiter’s thick clouds on September 21.

The Galileo mission left us needing to know more about Jupiter, but NASA set its sights elsewhere and we were left with flyby missions. The Ulysses, Cassini, and New Horizons spacecraft all gathered data about Jupiter during flybys that sent them on trajectories to their primary targets of the Sun, Saturn, and Pluto respectively. But the next phase of Jupiter research wasn’t far behind.

An artist’s concept of NASA’s Juno spacecraft at Jupiter

Juno launched on August 5, 2011, and now that it’s arrived it’s promises to drastically change our understanding of Jupiter. Juno will whip through the Jovian system on an elliptical orbit, measuring the planet’s gravity environment, magnetic field, atmospheric dynamics and composition, as well as the interaction between its interior, atmosphere and magnetosphere. It’s an in-depth study that will ultimately help us understand Jupiter’s origin and evolution, which will in turn explain our own Solar System as well as distant ones.

Astronomers suspect that giant planets play a significant role in planetary formation. As a spinning ask of gas and dust begins coalescing into a solar system, the gas giants form first. They absorb material that might otherwise be absorbed or blown away by the host star, and as they become larger their formidable mass pulls on smaller nascent planets enough to have an impact on their final orbits. The lives of planets, asteroids, and comets can be shaped by a gas giant like Jupiter as much as they are by their host star.

When it comes to our own Solar System, current competing theories about planetary formation come with different predictions on the content of Jupiter’s core. By measuring this composition, Juno will be able to eliminate which theories are wrong, hopefully leaving us with a clear answer. And by measuring the amount of water and oxygen in the planet, Juno will shed light on how these heavier elements spread through our young solar system, possibly helping explain how elements necessary for life reached Earth. And because Jupiter-like planets are a common type of exoplanet found by missions like Kepler, understanding our own gas giant will give scientists a benchmark for studying distant solar systems. Extrapolating lessons learned from our own system, we might be able to better narrow down the search for systems capable of harbouring life.

So while Jupiter might seem familiar, this is only the second dedicated mission we’ve ever sent to the gas giant. And if everything works on Juno, the scientific payoff could be incredible.

*Just a heads up since a lot of people are asking, I’m not affiliated with Juno at all nor am I going to be doing anything like “Jupiter in a Minute.” I’m watching from the outside on this one! * Additional sources: NASA Pioneers 10 and 11; NASA Voyager at Jupiter; NSSDC Jupiter page; NSSDC Galileo results; NASA Galileo mission page; NASA Juno mission page; NASA Juno; NASA Juno Press Kit; NSSDC PIoneer 0.