This watery, Neptune-sized exoplanet could help us learn how new worlds evolve

It's surprisingly lacking in heavy elements 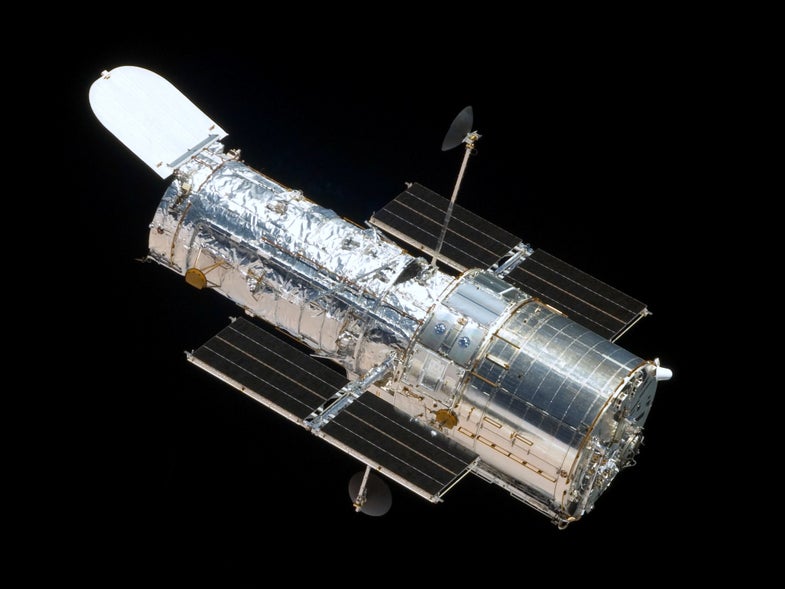 Astronomers have spotted water and clouds in the atmosphere of a Neptune-sized planet 430 light-years away.

While we know the galaxy is brimming with planets, we don’t know much about what they’re like. Our telescopes can peek into the atmospheres of some bigger, Jupiter-sized worlds, but smaller celestial bodies have remained elusive. But in a paper published today in Science, researchers have published some of the most detailed study yet of a medium, Neptune-sized planet.

The planet, named HAT-P-26b, is not a world we could ever live on, unless you’re into boiling hot (1300 F) temperatures and pressure so high it’ll crush you before you even land on the surface. But peering into these gassy worlds can tell us a lot about how planets form, and how unique our solar system is in the universe.

“Neptune-size planets are one of the most common planets that are out there,” says Hannah Wakeford, a postdoctoral researcher studying exoplanets at NASA’s Goddard Space Flight Center. “They’re a population that we really need to learn a lot more about.”

HAT-P-26b orbits so close to its star that its year is only four days long. As it passed between Earth and its star, Wakeford’s team used the Hubble and Spitzer space telescopes to analyze the molecules in its atmosphere.

“We’re looking at the change in the amount of light from the star, like a mosquito flying in front of a streetlamp,” says Wakeford. “Different things in the atmosphere will block the light in different ways.” But instead of creating shadows, the molecules in the atmosphere absorb certain wavelengths of light but not others. Looking at how the starlight’s composition changes as the planet passes reveals which molecules are common in its atmosphere.

They found clear signs of water in HAT-P-26b’s thick atmosphere, which makes up as much as 30 percent of the planet’s mass. The envelope is made up almost entirely of hydrogen and helium, and is relatively clear of clouds.

“This is the first time we’ve gotten such a strong signature of water vapor,” says Wakeford. Other studies have been hampered because they were only able to analyze one wavelength, or else they couldn’t take precise enough measurements from ground-based telescopes. And sometimes exotic clouds get in the way of measuring the atmospheric contents.

Using the water contents of the atmosphere, the team was able to estimate the abundance of HAT-P-26b’s heavier elements, like carbon and oxygen. And it turns out those heavy elements are lower than expected, indicating that this planet formed and/or evolved differently from our own Neptune.

In our solar system, Jupiter and Saturn contain five and ten times the quantity of heavy elements found in the sun. Neptune and Uranus are smaller but much richer in heavy elements, with about 100 times more than the sun. Scientists used to think this was because the latter two formed in the outskirts of the solar system, bombarded by icy debris carrying heavy elements. Jupiter and Saturn formed closer to the developing sun, where the icy debris couldn’t reach them.

But because HAT-P-26b only contains about 4.8 times more heavy elements than the sun, this Neptune-size planet must have formed closer to its star, or else was born later in the star’s life after all the icy debris had cleared out.

The findings underline the incredible diversity of worlds out there beyond our sun, and indicate that maybe our solar system isn’t a cookie cutter for others.

Waterford and her colleagues hope that after the James Webb Space Telescope launches in 2018, it will tell us more about HAT-P-26b—particularly how much carbon is in its atmosphere. They also intend to take a closer look into the atmospheres of other exoplanets, to continue to learn more about solar system diversity and planetary formation.

“Astronomers have just begun to investigate the atmospheres of these distant Neptune-mass planets, and almost right away, we found an example that goes against the trend in our solar system,” said Waterford in a press statement. “This kind of unexpected result is why I really love exploring the atmospheres of alien planets.”