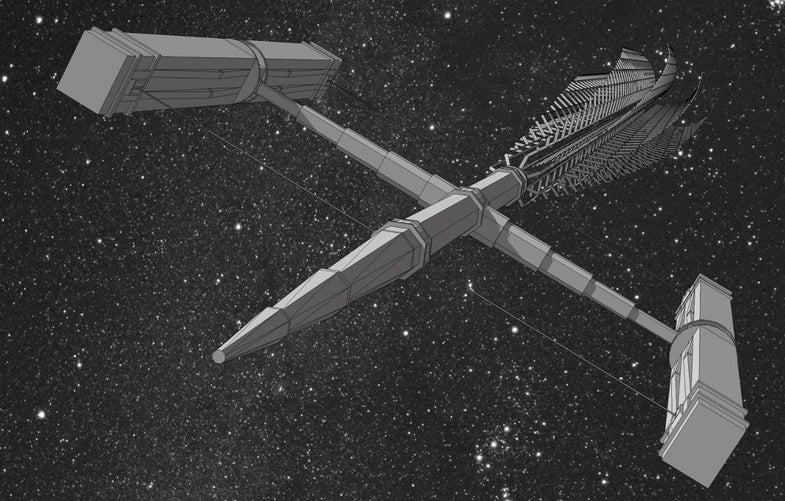 This past April, we put out a call for your ambitious spaceship designs. The only real rules were that we wanted to see an image, and that “the ideas must meet a certain threshold of seriousness, relying on technology that is available today or seen as feasible in the next decade.” Ultimately, four badass designs stood out, as selected by the staff here at Popular Science. 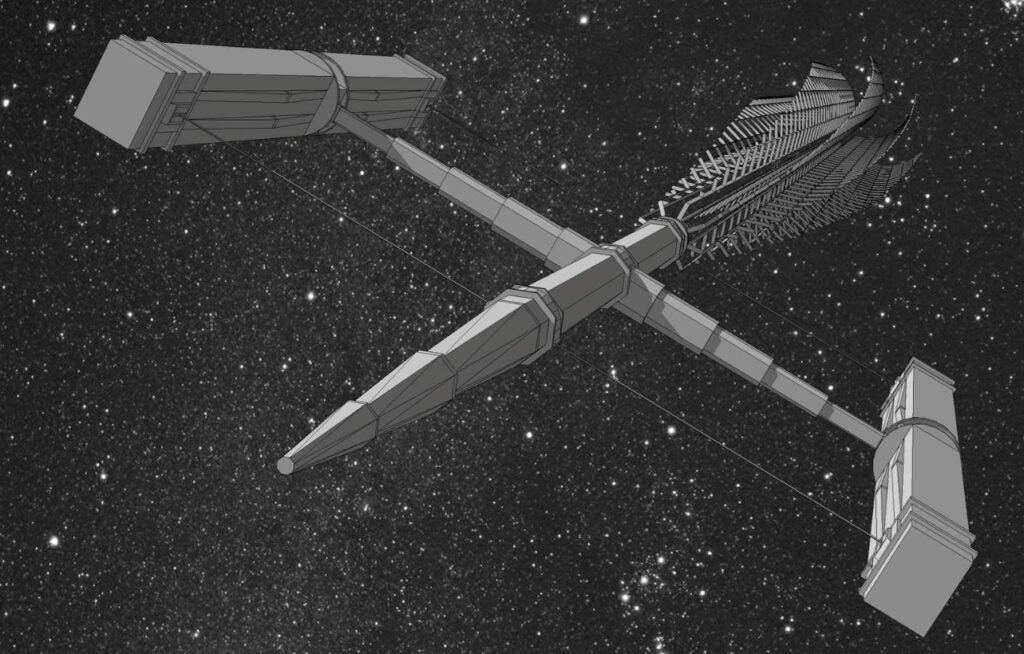 The winner of our space ship design contest

Andy Wright designed the kilometer-long “deep-space research vessel,” Ao-Shun, for his science fiction novel, Banner. The ship is meant to carry a crew of four to 36 for as long as food and supplies can last, which wouldn’t be long; Wright’s ship would be able to travel to Mars in 2.5 days, Neptune in 12 days, or our closest stars in just three years.

The book and ship draw from Wright’s personal life. “I wrote most of it right after I was in the national guard for eight years, so it’s heavily influenced by those experiences.” 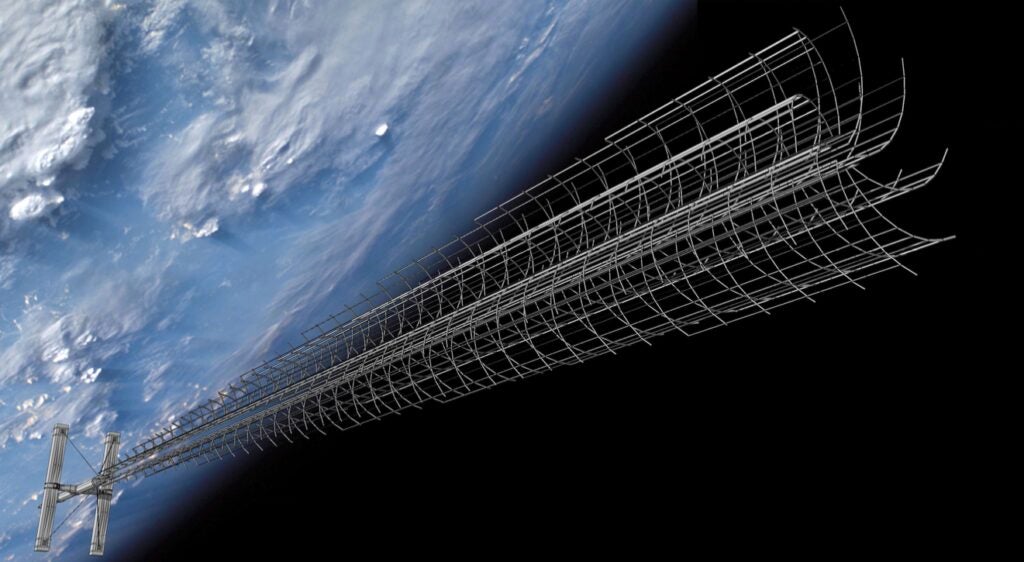 The Ao-Shun is powered by hydrogen floating around in space.

The Ao-Shun’s blazing speed comes from its carbon fiber, carbon nanotube and titanium mesh Bussard collector, based on a design proposed by physicist Robert Bussard in 1960, also found in the Star Trek universe. The theorized collector harvests stray hydrogen atoms from the interstellar medium, the space between stars, and sends them into the fusion reaction-powered engine. Wright envisions that the ship would accelerate at a constant rate until its journey’s halfway point, and then the engine would reverse, slowing the ship down at the same rate until arriving at the destination. Wright was a major trekkie growing up and got the idea for the Bussard collector from his uncle, who had a physics degree.

The Ao-Shun is fitted with a sensor package at the front with lasers and particle cannons to deal with any debris in the way. The compartments of the ship change their orientation to a Ξ shape (that’s the Greek letter xi) during the orbit, spinning around the center hull to produce gravity for the crew. 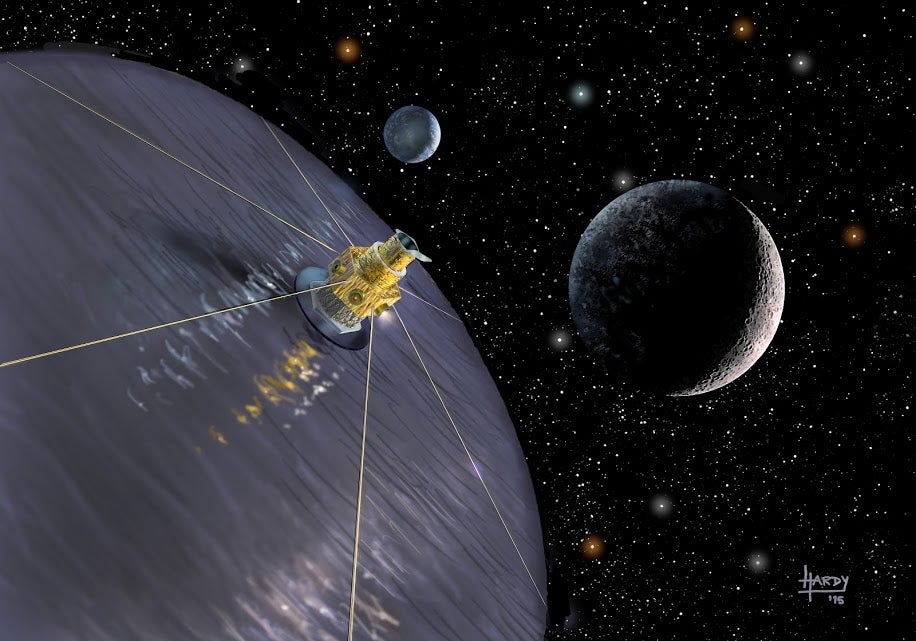 The dragonfly concept, our runner up

A team at the Technical University of Munich put together their design with one central question in mind: “how do we get to the stars?” The Dragonfly is an unmanned probe that the team thinks could reach Alpha Centauri, the nearest star system, in 100 years. The ship would contain a science payload to observe the interstellar medium (the space between the stars) and look for life near our neighbor stars. The ship is propelled by a light carbon nanotube-based light sail, powered by light from a laser system on the Moon. 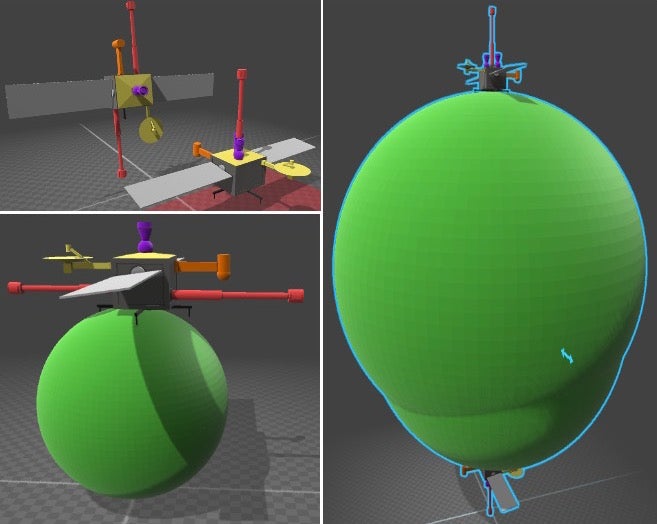 Mockup for the CESBIV attached to an asteroid

The CESBIV, or the Cheap Expendable Space Body Intercept Vehicle, is William Henry’s design for a craft that could nudge away incoming asteroids that threaten the Earth, or capture them to mine their valuable resources. He tried to create a design as inexpensive as possible with a sail, or as he calls it, “a space-worthy steam engine.” Individual or swarms of CESBIVs would attach to each of an asteroid’s magnetic poles, and the shock wave or “bow shock” from the solar winds (particles shooting off of the sun) interacting with the asteroid’s magnetism, would nudge the rock away from a deadly collision course with Earth. 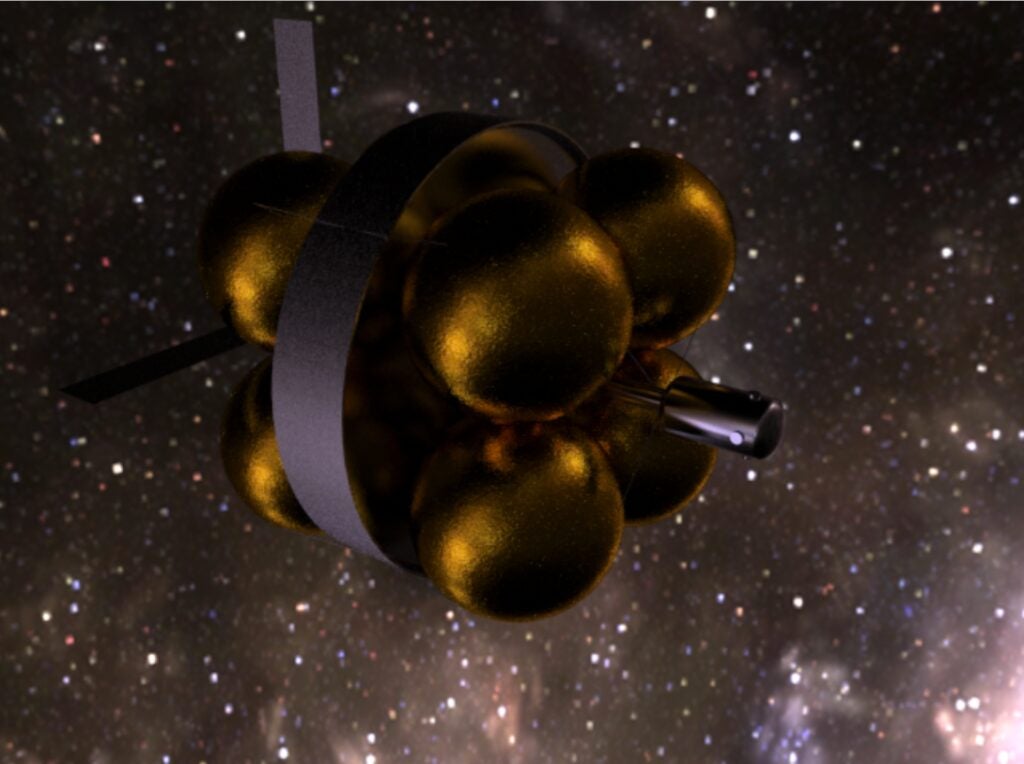 A mockup of the Endeavor craft

High schooler Kevin Strout’s Endeavor is a manned interplanetary craft for exploring the solar system. The 100-person crew would reside in a ring with a 40-meter radius, revolving 4.5 times per minute to provide artificial gravity. The ship weighs 10,000 metric tons fully fueled, and runs on hydrogen which could even be mined from asteroids to cut costs. Strout felt that was enough fuel to send the Endeavor on jaunts to Mars or Venus and back, or a one-way trip to the moons Callisto or Titan orbiting Jupiter and Saturn, respectively. Each gold ball is a hydrogen fuel tank, which rotate counter to the habitable ring to provide stability.