Lasers Could Send A Wafer-Thin Spaceship To A Star

Directed energy may be the key to rapid interstellar travel 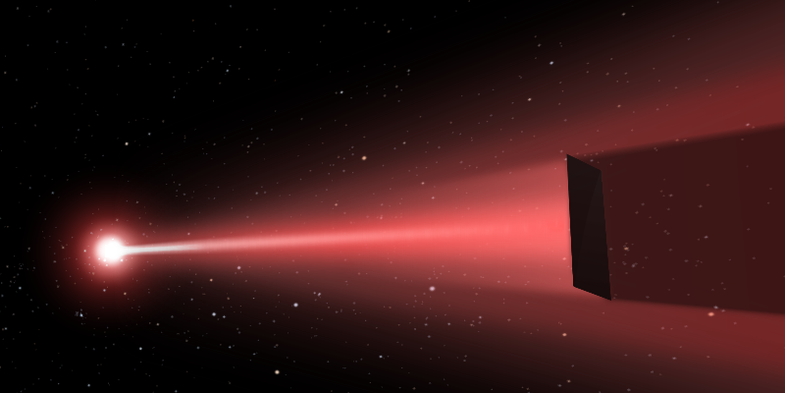 Scientists calculate that a gram-sized laser-propelled space probe could reach more than 25 percent of the speed of light and arrive at the nearest star in about 20 years.

The Voyager 1 spacecraft launched in 1977 is finally leaving the solar system after 37 years of flight at a speed of roughly 38,000 miles per hour or less than 0.006 percent the speed of light. This suggests that with conventional propulsion technology, humanity will never reach even the nearest stars, says experimental cosmologist Philip Lubin at the University of California, Santa Barbara.

Lubin and his colleagues suggest that, instead, lasers could accelerate small probes to relativistic — that is, near-light — speeds, reaching nearby stars in a human lifetime. “No other current technology offers a realistic path forward to relativistic flight at the moment,” Lubin says.

The problem with all thrusters that current spacecraft use for propulsion is that the propellant they carry with them and use for thrust has mass. Interstellar spacecraft require a lot of propellant, which makes them heavy, which requires more propellant, making them heavier, and so on.

Photon drives instead involve equipping spacecraft with mirrors and depending on distant light sources for propulsion. Solar sails rely on light from the sun, while laser sails count on powerful lasers.

Lubin acknowledges that photon drives are nothing new — in a letter to Galileo Galilei in 1610, Johannes Kepler wrote, “Given ships or sails adapted to the breezes of heaven, there will be those who will not shrink from even that vast expanse.” What is new, Lubin says, is that recent, poorly appreciated breakthroughs in laser technology suggest they can now accelerate spacecraft to relativistic speeds.

Breakthroughs in laser technology suggest they can now accelerate spacecraft to relativistic speeds.

The advance that Lubin’s approach depends on involves laser arrays. Instead of building one extremely powerful laser — a technologically challenging feat — researchers now can build phased arrays that are made of a large number of relatively modest laser amplifiers that can sync up to act like a single powerful laser. This strategy also eliminates the need for a single giant lens, replacing it with a phased array of smaller optics.

Eventually, the scientists calculate that a 50- to 70-gigawatt array that is 10 kilometers by 10 kilometers large in Earth orbit could propel a gram-sized wafer-like spacecraft with a 1-meter-wide sail to more than 25 percent of the speed of light after about 10 minutes of illumination, which could reach Mars in 30 minutes and Alpha Centauri in about 20 years. The researchers suggest this array could launch roughly 40,000 relativistic wafer-sized probes per year — each “wafersat” would be a complete miniature spacecraft, carrying cameras, communications, power and other systems.

The same array could propel a 100-ton spacecraft — about the mass of a fully loaded space shuttle, sans rockets — with a 8.5-kilometer-wide sail to about 0.2 percent of the speed of light after about 15 years of illumination. However, it would take about 2,200 years to reach Alpha Centauri at those speeds. Lubin suggests a larger array would make more sense for a human interstellar trip in the distant future, “but I personally do not see this as a priority until many robotic probes have established a need to do so.”

A major problem with this strategy is braking — the researchers currently have no way to slow down these laser-driven spacecraft enough for them to enter into orbit around the distant planets that they are dispatched to. The first missions that accelerate to relativistic speeds may have to simply fly by targets and beam back their data via lasers, Lubin notes.

Lubin notes there are many additional uses for such a laser array other than space exploration. For example, it could deflect asteroids away from Earth, or blast debris out of orbit to prevent it from threatening spacecraft, astronauts and satellites.

They are currently testing to show that small lasers can stop asteroids from spinning.

The researchers stress that they are not proposing to immediately build the largest system. They are currently testing small lasers on asteroid-like rock samples to show that such systems can stop asteroids from spinning, work that could help one day wrangle asteroids for exploration.

If lasers are the only practical route for interstellar travel, Lubin and his colleagues suggest that alien civilization may currently use lasers to help explore the cosmos. They suggest that SETI projects should look for telltale signs of such technology.

Lubin presented his latest work in a talk on January 25 at Harvard.