The evidence is right in front of you. 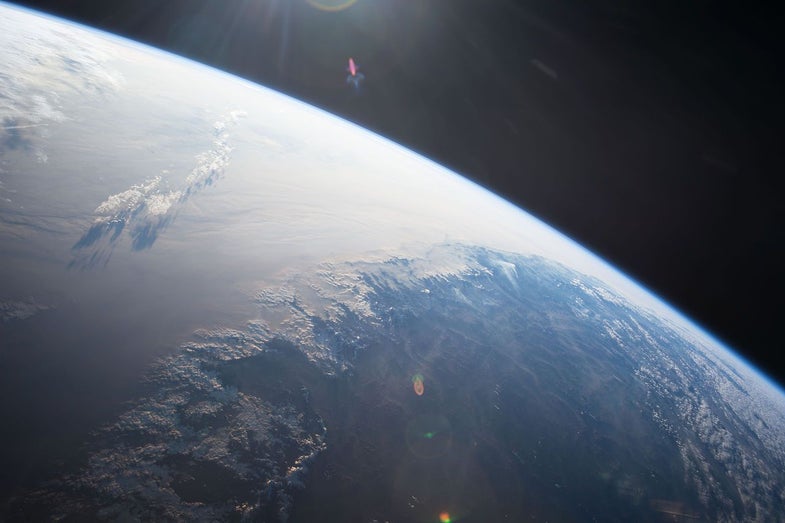 This story was originally published on Smarter Than That in 2008. We are republishing a lightly edited version on Popular Science in light of recent interest in the subject.

Humanity has known Earth is round for a few millenia, and I’ve been meaning to show more methods that prove the world is not flat. I’ve had a few ideas on how to do that, but recently got an interesting incentive, when Phil Plait, The Bad Astronomer, wrote about a recently published BBC article about “The Flat Earth” society. (Most recently, rapper B.o.B. went on a Twitter rant on the topic.) Phil claims it’s ridiculous to even bother rebutting the Flat Earth Society—and I tend to agree. But the history of our species’ intellectual pursuit is important and interesting. You don’t need to denounce all science and knowledge and believe in a kooky conspiracy theory to enjoy some historical factoids about humanity’s quest for space.

On we go, to the top 10 ways to know the Earth is unequivocally, absolutely, positively, 100% not flat!

Now that humanity knows quite positively that the Moon is not a piece of cheese or a playful god, the phenomena that accompany it (from its monthly cycles to lunar eclipses) are well-explained. It was quite a mystery to the ancient Greeks, though, and in their quest for knowledge, they came up with a few insightful observations that helped humanity figure out the shape of our planet.

Aristotle (who made quite a lot of observations about the spherical nature of the Earth) noticed that during lunar eclipses (when the Earth’s orbit places it directly between the Sun and the Moon, creating a shadow in the process), the shadow on the Moon’s surface is round. This shadow is the planet’s, and it’s a great clue about the spherical shape of the Earth.

Since the earth is rotating (see the “Foucault Pendulum” experiment for a definite proof, if you are doubtful), the consistent oval-shadow it produces in each and every lunar eclipse proves that the earth is not only round but spherical—absolutely, utterly, beyond a shadow of a doubt not flat.

2. Ships and the horizon

If you’ve been next to a port lately, or just strolled down a beach and stared off vacantly into the horizon, you might have noticed a very interesting phenomenon: Approaching ships do not just “appear” out of the horizon (like they should have if the world was flat), but rather seem to emerge from beneath the sea.

But—you say—ships do not submerge and rise up again as they approach our view (except in Pirates of the Caribbean, but we are hereby assuming that was a fictitious movie series). The reason ships appear as if they “emerge from the waves” is because the world is not flat: It’s round.

Imagine an ant walking along the surface of an orange, into your field of view. If you look at the orange “head on”, you will see the ant’s body slowly rising up from the “horizon” because of the curvature of the orange. If you would do that experiment with the ant approaching along a long road rather than a round object, the effect would change: The ant would slowly “materialize” into view (depending on how sharp your vision is).

This observation was originally made by Aristotle (384-322 BCE), who declared the Earth was round judging from the different constellations one sees while moving away from the equator.

After returning from a trip to Egypt, Aristotle noted, “There are stars seen in Egypt and…Cyprus which are not seen in the northerly regions.” This phenomenon can only be explained if humans were viewing the stars from a round surface, Aristotle continued, claiming that the sphere of the Earth is “of no great size, for otherwise the effect of so slight a change of place would not be quickly apparent.” (De caelo, 298a2-10)

The farther you go from the equator, the farther the “known” constellations go towards the horizon, to be replaced by different stars. This would not have happened if the world was flat:

If you stick a stick in the (sticky) ground, it will produce a shadow. The shadow moves as time passes (which is the principle for ancient Shadow Clocks). If the world had been flat, then two sticks in different locations would produce the same shadow:

But they don’t. This is because the Earth is round, and not flat:

Standing on a flat plateau, you look ahead toward the horizon. You strain your eyes, then take out your favorite binoculars and stare through them, as far as your eyes (with the help of the binocular lenses) can see.

Next, climb up the closest tree—the higher the better, just be careful not to drop those binoculars and break their lenses. Then look again, strain your eyes, and stare through the binoculars out to the horizon.

The higher up you climb, the farther you will see. Usually, we tend to relate this to Earthly obstacles—like the fact we have houses or other trees obstructing our vision on the ground, and climbing upwards we have a clear view—but that’s not the true reason. Even if you stood on a completely clear plateau with no obstacles between you and the horizon, you would see much farther from the greater height than you would on the ground.

This phenomenon is caused by the curvature of the Earth as well, and would not happen if the Earth was flat:

If you’ve ever taken a trip out of the country, specifically long-distance trips, you could notice two interesting facts about planes and the Earth:

7. Look at other planets

The Earth is different from other planets, that much is true. After all, we have life, and we haven’t found any other planets with life (yet). However, there are certain characteristics all planets have, and it will be quite logical to assume that if all planets behave a certain way, or show certain characteristics—specifically if those planets are in different places or were created under different circumstances—our planet is the same.

In other words: If so many planets that were created in different locations and under different circumstances show the same property, it’s likely that our own planet has the same property as well. All of our observations show that other planets are spherical (and since we know how they’re created, it’s also obvious why they take this shape). Unless we have a very good reason to think otherwise (which we don’t), our planet is very likely the same.

In 1610, Galileo Galilei observed the moons of Jupiter rotating around it. He described them as small planets orbiting a larger planet—a description (and observation) that was very difficult for the church to accept, as it challenged a geocentric model where everything was supposed to revolve around the Earth. This observation also showed that the planets (Jupiter, Neptune, and later Venus was observed too) are all spherical, and all orbit the sun.

A flat planet (ours or any other planet) would be such an incredible observation that it would pretty much go against everything we know about how planets form and behave. It would not only change everything we know about planet formation, but also about star formation (our sun would have to behave quite differently to accommodate the flat-earth theory) and what we know of speeds and movements in space (like planets’ orbits and the effects of gravity). In short, we don’t just suspect that our planet is spherical. We know it.

8. The existence of time zones

The time in New York, at the moment these words are written, is 12:00pm. The sun is in the middle of the sky (though it’s hard to see with the current cloud coverage). In Beijing, it’s 12:00am, midnight, and the sun is nowhere to be found. In Adelaide, Australia, it is 1:30am. More than 13 hours ahead. There, the sunset is long gone—so much so, that the sun will soon rise up again at the beginning of a new day.

This can only be explained if the world is round, and rotating around its own axis. At a certain point when the sun is shining on one part of the Earth, the opposite side is dark, and vice versa. That allows for time differences and time zones, specifically ones that are larger than 12 hours.

Another point concerning timezones, the sun, and Earth: If the sun was a “spotlight” (very directionally located so that light only shines on a specific location) and the world was flat, we would see the sun even if it didn’t shine on top of us (as you can see in the drawing below). Similarly, you can see the light coming out of a spotlight on a stage in the theater, even though you—the crowd—are sitting in the dark. The only way to create two distinctly separate time zones, where there is complete darkness in one while there’s light in the other, is if the world is spherical.

9. The pull of gravity

Here’s an interesting fact about mass: It attracts things to it. The force of attraction (gravity) between two objects depends on their mass and the distance between them. Simply said, gravity will pull toward the center of mass of the objects. To find the center of mass, you have to examine the object.

Consider a sphere. Since a sphere has a consistent shape, no matter where on it you stand, you have exactly the same amount of sphere under you. (Imagine an ant walking around on a crystal ball. From the insect’s point of view, the only indication of movement would be the fact the ant is moving its feet—the shape of the surface would not change at all.) A sphere’s center of mass is in the center of the sphere, which means gravity will pull anything on the surface of the sphere straight down toward the center of the sphere. This will occur no matter where on the surface the object is located.

I am quite positive that, even for Australians, an apple falls downwards, not sideways. But if you have your doubts, I urge you to try dropping something—just make sure it’s nothing that can break or hurt you.

For further reading about the center of mass and distribution of mass, check out this link. And if you are brave enough to handle some equations (not involving integration), you can learn more about Newton’s Law of Universal Gravitation here.

In the past 60 years of space exploration, we’ve launched satellites, probes, and people into space. Some of them got back, some of them still float through the solar system (and almost beyond it), and many transmit amazing images to our receivers on Earth. In all of these photos, the Earth is (wait for it) spherical. The curvature of the Earth is also visible in the many, many, many, many photos snapped by astronauts aboard the International Space Station. You can see a recent example from ISS Commander Scott Kelly‘s Instagram right here:

You know what they say—a picture is worth a thousand diss tracks.

Moriel Schottlender is a software engineer at Wikimedia Foundation. This article was originally posted on her Smarter Than That blog in 2008.