Exclusive: Yuri Milner tells us about his dream to hunt for aliens in deep space

Shooting for the stars. A few days before Russian billionaire Yuri Milner announced his plan to spend $100 million on a project to send tiny flying probes to Alpha Centauri—four light years from Earth—he gave Popular Science an exclusive first look at his plan, and shared his thoughts behind it.

To recap: With an assist from renowned physicist Steven Hawking, Milner plans to send probes as small as a cracker and as thin as a postage stamp 25 trillion miles away, to our closest neighboring star system. The trip would take 30,000 years with current technology. But Milner being Milner—a man who saw the genius of social media a decade ago and bought his way into the party via Facebook and Twitter—he’s not settling for “current technology.” No. He will send them into space on a laser beam. And they will propel themselves for the four-year flight by way of tiny thrusters.

It gets weirder—and by that we mean more fascinating, inspiring, and challenging. But don’t take our word for it. Listen to Milner, who sat down with tech editor Dave Gershgorn at a midtown Manhattan restaurant and, at one point, pulled from his pocket one of his tiny, flying star-bound chips. 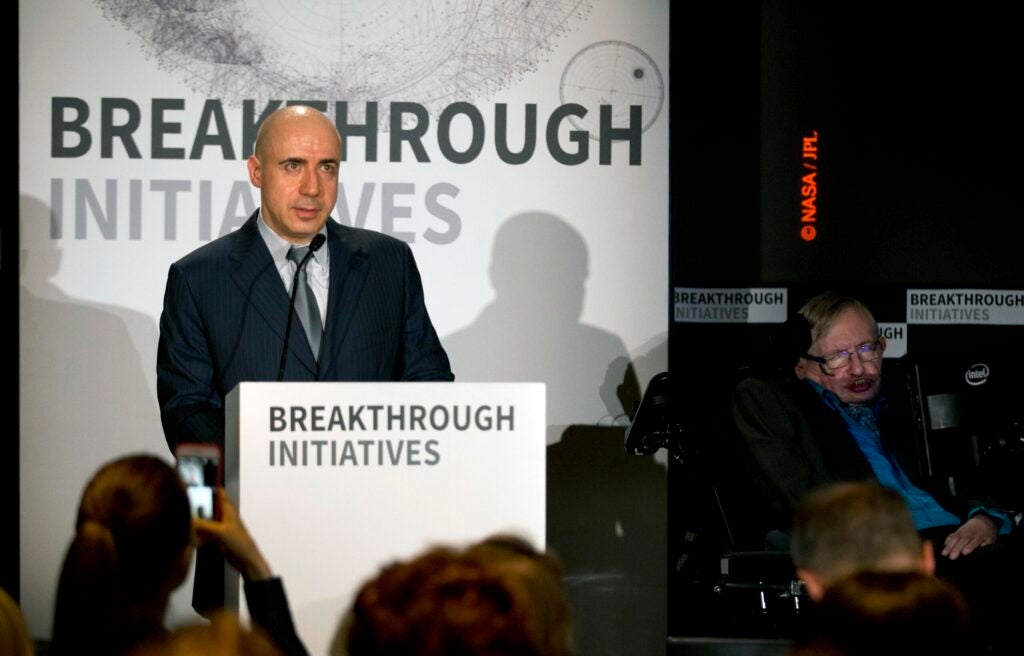 Popular Science: Why are you doing this?

People have been thinking about interstellar travel for a long time. The first one who proposed to do it by sail was actually [German astronomer Johannes] Kepler, in a letter to Galileo in 1610. At the time, we did not know how to do it. But after the Second World War, different scientists were thinking about it, and different options were considered. A sail was one, and fusion and antimatter, and others. But it was assumed that this is centuries away.

What changed the equation was the weight of the spaceship. We can make one that weighs a few grams and that has sails. In the last 15 years, everything has shrunk in microelectronics. Communication equipment, navigation equipment, cameras, processing power, thrusters. You can have tiny thrusters on it.

[Here, Milner pulls out one of his tiny probes. It’s a small printed circuit board, the size of a cracker, with a tiny solar panel. There are two thin antennae extending from the top and side edges of the PCB. One is roughly two inches long, the other one inch.]

This is what we’re looking at. It doesn’t have all the functionality we need, and it’s a little too heavy, but this gives you the scale of things. You probably don’t need the solar panels, but you need the other things. But this what I’m talking about.

What it gives you is redundancy. Instead of sending one big expensive machine, you can send hundreds of these. Interstellar medium is dangerous. There are dust particles that can destroy your technology. The math today shows that between the sun and Alpha Centauri something like this, if it flies this way [he holds the thin edge as the leading edge] it will have four collisions of dust particles on the one-micron size.

The huge Star Wars ship that flies into the wormhole close to the speed of light with lots of people inside–this is far, far away. Any collision with the smallest dust particles takes you out. So what we can do now is something like this. You need to be very thin.

How much does that cost?

With all the equipment we’re talking about, this is the cost of an iPhone. So essentially we can mass-produce them. The marginal cost of additional launch is a few hundred thousand dollars, if you think about the cost of power. So it makes sense to launch a few hundred of them, maybe a thousand of them, and some of them might make it. Some won’t. But this is a new way to look at interstellar travel.

So that’s the ship. How do you get them there?

A laser, if you can build one big enough. In principle we can. You need on a scale of 100 gigawatts for a few minutes of time, because it takes just a few minutes to accelerate this thing to 20 percent the speed of light. So the pure physics tells us 1 gram, 20 percent the speed of light: 50 gigawatts over a few minutes. Scientists have done it on a smaller scale, so we know it can be done. It’s not inventing completely new technology. We just need to dramatically scale it up.

How long have you had this idea?

I had this idea early on. I carry it with me in my name. I was named after Yuri Gagarin [(the first human in space)], I was born in 1961, the same year he was launched, and my parents called me Yuri after him. Then I became a physicist, and I was curious what is possible in that area. I was reading books of Carl Sagan and Isaac Asimov. I’ve been kind of following the field. When I announced Breakthrough Initiatives [which Milner founded] years ago, this is one of the ideas we were looking at, alongside SETI [the Search for Extraterrestrial Intelligence, which Milner funds] and so on.

I was skeptical this was anywhere near the horizon back then. But as we looked more closely and talked to experts, I found that it was possible in 20 to 30 years, partly because the cost of lasers falling at an exponential curve.

What are the challenges?

The stability of the sail versus the energy. You need to reflect more than 99.9 percent, otherwise your cell will be destroyed. Do we have this material today? We don’t. But there is a path to this kind of material.

Also, there are weight constraints and the stability of the sail in the beam. If you’re slightly out of the beam, then you’re off completely. Can we devise a form of sail that will be stable on the beam? If it moves sideways, then it automatically moves inwards? There are many small and relatively complicated challenges like this. But it looks like, from what we see today, there is a path forward to solve pretty much all of these challenges. It is possible there will be roadblocks, but we can move forward in many of those directions. This first $100 million is really just the proof of concept.

How do you test the feasibility of these different technologies, all working together, and in space?

Phase one is knowing that in principle it can be done. We’ve tested it in the lab. Phase two is: We need to build a prototype. And that will take time. Then it will take time to test. When everything works, then you build the big machine. And that would be in the billions of dollars, but not trillions, as it has been with previous projects.

So how does laser propulsion work?

It will be a continuous pulse, for the duration of a few minutes. 30,000 G acceleration. But this can survive.

So this gets up to speed and…

You just go. Flyby mission. You go for 20 years, and you have about 1 day to take your measurements.

A few years to send the images back.

You’re not going to track them after that?

Well, a 1-watt battery is not enough, and eventually they will hit a dust particle and probably be gone. But that’s how the first step should look.

And what if you find some other form of life?

I think it’s more or less clear that there is no intelligent life within our close vicinity. Because otherwise we would probably seeing leakage of some sort. It’s hard to believe they don’t communicate between their own satellites. So we would have seen it by now, and the Listen project is looking at the nearby stars to make sure that nothing is coming from there. So I think that there is a possibility of some life, but not intelligent life. So hopefully we will see something, but not too scary.

So where is the return on your investment?

I have a day job. This is a hobby. This is non-profit. Purely. Everything we do is based on open information, and we will be publishing all results. That’s the only way to move this forward. And there’s no guarantee we’ll get there.

That’s a lot of money. What’s driving you to do this?

I think many people dreamed about it. Many people made efforts. Carl Sagan was one of them. I’m not talking about Kepler. I feel we have responsibility to push this forward if we can. People have been developing this technology, not specifically for this project, but we have this capability now. And I’m convinced that if something is possible, somebody is going to do it. So I think we just really want to see if it’s practically possible.

But I think even having a serious conversation about this subject is pretty exciting, that we’re already at that stage. Not at the thousand years. That tells a lot about what we’ve been able to achieve as human beings. But many great scientists have been talking about the next big frontier.

How will your little probes communicate with Earth?

A small laser on the wafer. So to me it was incredible to find out that a 1-watt battery, with a very small laser, everything in a gram, can actually send enough information from those huge distances.

Of course, there are a lot of questions. For example, how do you point to the Earth to send those images? So the size of the beam from the small laser — and, by the way, you use the sail as an antenna. The second time you use it is as an antenna, so you need to point it back to Earth, basically.

The size of the laser beam when it reaches our solar system is about .1 AU. On one hand, it’s wide enough; on the other hand, you need to point with significant precision. So just looking at the pure physics, it can be done and this is pretty amazing.

That’s just one day’s worth of data you’re transmitting. They’re not sending anything along the way?

No. Well, maybe. But you need to save your battery. You probably want to ping home once every six months, just to say that you’re alive.

What kind of data would you want to get?

Similar to what you would get from the Pluto flyby. The images, the magnetic field measurements, maybe spectroscopy. You know, things like that.

You’re kind of crafting this most important day in human history, where we get a close-up look at the closest system.

If we get the image, that will be a good day. And about four years to wait. Hopefully a little faster than that.

There is an interesting symmetry in this project, and also aesthetic beauty, because you really are using light. First, you can collect light on the ground here to power the laser. Then the laser is light also. So you take one photons, and you are sending different type of photons in a very coordinated fashion, and then use this to push the spaceship. Then as it flies, it uses small photon thrusters to navigate a little bit, also light. And then as you arrive you take a photo, which is again light, image, and then you use laser, another light source, to send the picture back. So it’s all about light. So if you want to write a poem…

Sometimes, at least in physics, the most successful theorems have this mathematical beauty. So maybe the beauty of this project tells us some story, that maybe that’s the way to do it. Maybe that’s the message.

A version of this article was also published in the July/August 2016 issue of Popular Science, in a section about insane ideas that might save the world.