The first Antarctic greenhouse harvest may lettuce go to Mars 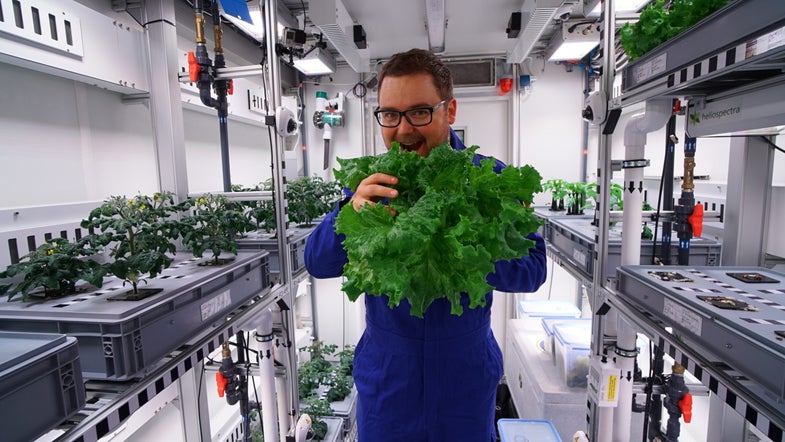 Lettuce on the moon might sound like the name of a prog-rock song, but that’s the eventual plan. This morning, Germany’s Aerospace Centre DLR announced that their experimental Antarctic greenhouse had harvested its first crops: 8 pounds of salad greens, 18 cucumbers, and 70 radishes, as reported by the Associated Press. It’s the first result of a project begun in January, when the greenhouse arrived in Antarctica, but there promises to be more to come. In addition to the veggies they just harvested, the scientists also planted strawberries, bell peppers, and a number of herbs. By May, DLR says they expect to be able to get about 10 pounds of produce per week.

Growing food in one of Earth’s most inhospitable environs is a task in its own right, but the hope is that this experimental greenhouse, which is part of the EDEN ISS project, will provide insights into how to grow vegetables in space—and on alien worlds. Long term space voyages, such as a journey to Mars, will require a renewable food source, as would any colonies we built there. That means figuring out how to grow food in the specialized environment of a spaceship, but it might also have impacts here on Earth. As we’ve reported before, food production here on the small blue marble isn’t that stable right now, either. In the future, it’s likely agriculture on Earth will become more decoupled from the land because of climate change and population growth, and being able to cultivate crops in a contained environment—one that even recycles water from the air back into the plants’ nutrition system—could prove valuable.

Last month, NASA reported that the crew of the International Space Station are also conducting space veggie experiments, having just harvested three greens: mizuna, also known as “spider mustard,” red romaine lettuce, and tokyo bekana cabbage. AP reports that DLR spokesperson Daniel Schubert says “the Antarctic project aims to produce a wider range of vegetables that might one day be grown on Mars or the Moon.”

The Antarctic experiment is taking place in a Mobile Test Facility on stilts about the ground. The building, which looks sort of like an long and thin trailer on legs, houses a cultivation room with a series of windowbox-shaped “growth cabinets.” Their produce will provide a supplement to the diets of the 10-person winter crew of Neumayer Station III, a German Antarctic research station. That crew now includes a DLR scientist specifically attached to the EDEN-ISS project. He’ll enter and leave the Mobile Test Facility, which is a standalone building near the station, via a special airlock.

Just like it would have to on the ISS or the Moon, the greenhouse is designed to be totally independent of its environment and run on an aeroponic model. The plants are nourished by a liquid nutrient solution instead of soil, and by specially designed LEDs in lieu of sunlight. “We are also adapting the air in the greenhouse to meet the needs of the plants as much as possible,” DLR spokesperson Daniel Schubert explained in a January 2018 press release. That means increasing the amount of carbon dioxide in the air, and keeping that air clear of bacteria and mold with special filters and a UV radiation disinfection process. In this way, Schubert said, “purely biological growth is possible without insecticides or pesticides.”

This promising thesis has been tested with the recent crop. Despite a few hiccups along the way—the chill winds of the Antarctic caused the container to form condensation at one point in the process, for instance—it offers hope. And for the research station’s crew, it also offers fresh veggies in a frigid desert.

The test facility was shipped to Antarctica in pieces, and had to be assembled by a special team of engineers and scientists that waited at the station to receive it. They ended up spending Christmas and New Years there, as the shipping was delayed, but now, only “harvester” Paul Zabel remains with the winter crew of the station—and the penguins. While they were building the lab, a DLR press release notes, they were “repeatedly visited by penguins curiously approaching the container and observing their work.” That probably isn’t going to happen to anyone building a greenhouse on Mars.