Virgin Galactic finally made it to space. Here’s what that means.

It's not just a big deal for future space tourists, either. 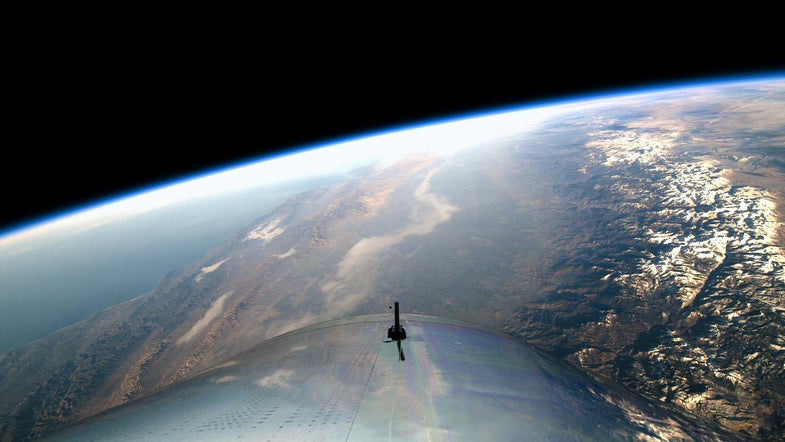 Richard Branson began his spaceflight company, Virgin Galactic, 14 years ago. In all that time, the company has experienced several highs, and some crushing lows, but it has never actually gone into space.

Until now. On Thursday morning, Virgin Galactic’s passenger spaceplane, SpaceShipTwo, and its two pilots managed to top out at Mach 2.9 and reach an altitude of 51.4 miles above the the Mojave Desert—just enough height to cross the atmospheric threshold into space, based on the definition used by the U.S. military and NASA (although still below the 62-mile Karman Line, used internationally and among the scientific community as the definition of the border between Earth’s atmosphere). Before Thursday, SpaceShipTwo had only flown as high about 32 miles in altitude.

SpaceShipTwo is part of a two-part launch system pioneered by Virgin Galactic since its inception. WhiteKnightTwo carries SpaceShipTwo into high altitude, and the latter separates and undergoes a massive thruster burn to head into suborbital space for a short duration.

It’s a remarkable feat for a company that faced a devastating setback in 2014, when its VSS Enterprise spaceplane experienced a catastrophic failure in the middle of a flight leading to the death of one of the vehicle’s copilots.

Thursday’s success means the company is closer than ever to finally realizing its goal of sending tourists into space, but the implications extend beyond recreation. Virgin Galactic, like many other private spaceflight companies these days, could play a pivotal role in expanding science and technology research and opening up new, cost-effective experimental opportunities for scientists across a slew of disciplines.

“We typically use the label ‘space tourism’, to talk about tourists,” says Steven Collicott, an aerospace engineer at Purdue University. “But the same companies, these suborbital providers, are providing a suborbital research lab. There’s no zero-gravity room here on Earth. We can’t just flip a switch on a wall and create weightlessness.”

But a spacecraft entering suborbital or orbital space is essentially a zero-gravity room. “Anyone who can supplement that, like commercial space companies like Blue Origin or Virgin Galactic and others, it’s a great deal. It’s a great new opportunity that happens to come in at a good price point.”

Collicott, who has already flown four payloads on previous Blue Origin missions, notes that the space station is still the ultimate out-of-this-world laboratory—but most researchers won’t get a chance to send experiments up there for the weeks or months it takes to complete them. “It’s not that [a Virgin Galactic flight] is a better version of something that already exists,” he says. “But a three-minute exposure to weightlessness at a good price point is invaluable. Having something like this industry supplementing space station time is just fabulous.”

The range of disciplines that could take advantage of such systems is incredibly broad. Collicott’s own work is in fluid dynamics, and understanding how weightlessness changes the physics of liquids and gases at both macro and micro scales. In spaceflight, these changes end up being extremely important—ensuring the safe storage and use of propellant inside a vehicle or rocket hurtling through space, for instance.

But biologists and physiologists can also learn a lot by exposing living systems to space-like conditions and observing how they respond. This is going to be extremely useful moving forward, when we start to ship plants, animals, and other biological systems across outer space to support human residency on the moon, Mars, and beyond. Emergency medicine in weightlessness is a whole other ballgame, and it will be critical to understand how to execute things that we never have to contemplate here on Earth, like separating blood from air or doing suction during a surgical operation.

Other physicists studying how celestial bodies are formed can glean a lot from microgravity experiments, observing how fine rocks and dust collide and stick together or break up in weightlessness.

Lastly, atmospheric and climate scientists have very little direct data of what goes on in the mesosphere and beyond. SpaceShipTwo and other commercial space vehicles are some of the only objects that directly interact with these parts of the atmosphere, creating immensely valuable opportunities for these scientists to actually study what goes on up there.

Those flights only enter space for a few minutes, but scientists are savvy enough to make the most of them. “There are obviously a lot of things you can’t do in three minutes, but then there are also plenty of things you can do. They can really help to fill a scientific gap,” Collicott says. Thursday’s flight, in fact, carried four experimental payloads from NASA, including one focused on examining the collisions of asteroidal material in microgravity, which will help map the behavior of dust on bodies with low surface gravity. It’s a fast experiment, but it could provide some data that will help us figure out how to land robots and spacecraft on asteroids and small moons.

It also doesn’t hurt that these opportunities are becoming much more affordable. The advent of reusable rockets and spaceflight architecture by Blue Origin and SpaceX has already driven the cost of going into space down, and that trend should continue. Virgin Galactic’s reusable spaceplane system will only push those prices down further as competition fights for customers. Exact costs are hard to come by, but Collicott estimates that, compared to the few-million-dollar price of getting a payload on an old-fashioned rocket, putting a payload on a Virgin Galactic flight would be considerably lower. And the fact that these flights can be executed in a short turnover is great news for scientists trying to run multi-trial experiments.

And because suborbital flights like these are more gentle (since they don’t require the g-force needed to go to a higher altitude), researchers don’t have to spend added funds ruggedizing the payload for a bumpy ride—they can make do with more off-the-shelf equipment.

Collicott thinks maybe the most exciting role the rise in space tourism might play for science is simply opening up opportunities to young students. In his experience, for example, Blue Origin has enabled K-12 students to fly experimental payloads aboard launches into suborbital space for roughly $8,000—half the cost of new football team uniforms. “It’s really great for the kids,” he says. “I think this has the potential to be revolutionary.”

If Virgin Galactic can continue its latest string of successes and unambiguously prove it can safely go to space and back (yes, that means crossing the Karmin Line!) it may establish itself as a powerful force in improving science and technology development around the world. We all won’t be able to afford a ticket to space, but their relatively cheap rocket rides could still help improve our lives eventually.