As NASA's robotic 'naut tweets away its dying breath, the blogosphere pays its respect 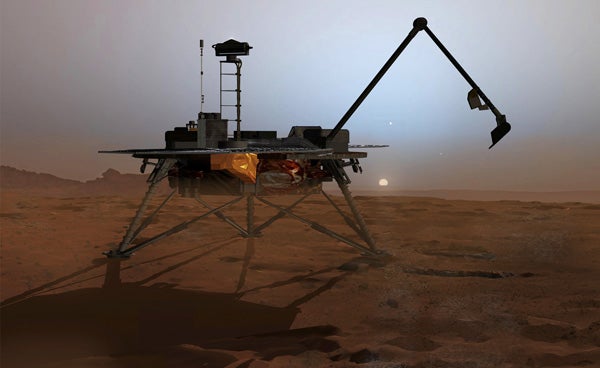 Time to whistle “Taps” for the Phoenix Mars Lander.

NASA has begun bidding a planned goodbye to its Phoenix Mars Lander. The lander relies on solar panels and the sun’s golden touch to reawaken it each day, but a dust storm has hastened the end in the face of the oncoming Martian winter.

However, the lander’s cold fate has evoked an outpouring of netizen love. Wired hosted a pithy epitaph contest to mark the occasion. Phoenix also polished its geek credentials by guest-blogging for Gizmodo about its mission. Readers can still catch Phoenix‘s personal Twitter stream from the popular social networking site, complete with robotic tweets such “Space exploration FTW!”

Personable messages from a robotic spacecraft may sound quaint, but space exploration is indeed a winner here. Following a May 25 landing on Mars, Phoenix directly identified water ice on the red planet for the first time. It even detected falling snow with a laser remote sensing instrument. Samplings of Martian dirt have helped reveal the chemical makeup of a planet that could have harbored life.

The Phoenix mission also highlighted both the advantages and disadvantages of robotic space exploration. Some observers grumbled about the lander’s earlier troubles with scooping up dirt samples and delivering them to its test ovens – a problem that a human astronaut could probably have fixed in minutes, not days.

Yet a human mission to Mars currently remains out of the question. Even if new technologies can protect astronauts against radiation during the months-long journey, the need to provide life support and return systems dramatically boosts mission costs. NASA also doesn’t seem eager to give astronauts one-way tickets to Mars, although Buzz Aldrin might say otherwise.

By contrast, Phoenix can cheerfully tweet away the final days of its suicide mission. Sure, it lacks human drama, but that hasn’t stopped human interest in our robotic brethren. Earlier surveys suggested that younger people found more excitement in the predecessor Mars rover missions than in the idea of human missions to Mars. Similarly, space enthusiasts howled when budget cuts threatened to end the rover missions this year.

Can social networking further encourage a human stake in robotic space exploration? If Phoenix is any indication, NASA’s SUV-sized Mars Science Laboratory should get to work on its blogging voice.

The Phoenix lander was named one of PopSci‘s top 100 innovations of the year. Read about it here, where you can also check out all of Best of What’s New 2008.