A Huge Ocean Likely Covered More Than a Third of Mars 3.5 Billion Years Ago

It took NASA a few decades, several probes, and a whole lot of money to find hard evidence for the... 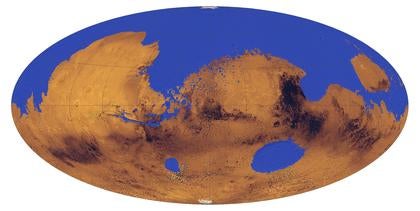 It took NASA a few decades, several probes, and a whole lot of money to find hard evidence for the existence of water on the surface of Mars. But timing is everything. Had the agency been looking for water on the Red Planet a few billion years earlier, all they would’ve needed was a telescope. A new CU-Boulder analysis of the Martian surface has concluded that a massive ocean covered as much as a third of the planet around 3.5 billion years ago.

The CU researchers are by no means the first to suggest that Mars was once home to large oceans, but their research does lend a lot of credence to earlier assertions to that effect, assertions that have been challenged repeatedly over the years. The study is the first to mash up a huge body of data collected by NASA and ESA missions over the last decade. That data suggests Mars at one point had a hydrological cycle not too different from our own, including cloud formation, groundwater accumulation, and precipitation.

The ocean — which likely covered about 36 percent of the planet and contained 30 million cubic miles of water, about ten times less than Earth’s oceans — was fed by at least 52 river deltas which were in turn fed by countless river valleys and tributaries. Half of those deltas were at similar elevations, most likely marking the ocean’s boundaries.

Of course, if the researchers really have answered the question of Mars’ oceanographic past, they’ve asked several more, most notably: where did all that water go? The Mars Atmosphere and Volatile Evolution Mission (MAVEN), quarterbacked by CU-Boulder researchers, will launch in 2013 to try and answer those questions.