How can we test outer-space gear without leaving the comfort of Earth? Watch the video 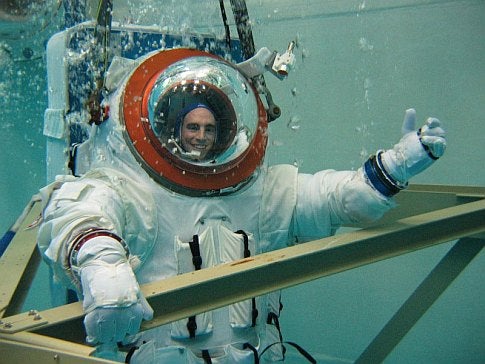 Training to be an astronaut is not for the faint of heart. Your training includes being strapped into a contraption that whirls you around at high speeds until you’re on the verge of losing consciousness. You get to ride on a plane — affectionately referred to as the “vomit comet” — that nosedives into a freefall to simulate microgravity. Or, you might also get to spend six hours in an underwater tank wearing a 650-pound spacesuit. Luckily, it wouldn’t feel like 650 pounds, because you’d be in a state of neutral buoyancy.

At the University of Maryland’s Space Systems Laboratory, a research team has developed the MX-2 Suit — a neutral buoyancy spacesuit designed to be worn underwater so that astronauts can test procedures and technologies in a simulated weightless environment.

To simulate the weightlessness of space, the MX-2 Suit is placed underwater in the Lab’s Neutral Buoyancy Research Facility — a large tank of water 25 feet deep and 50 feet in diameter. “We use a crane to lift the suit with the subject into the water,” said Shane Jacobs, an aerospace engineering graduate student at the University of Maryland and the project lead. “Once it’s in the water, we disconnect the crane and the suit is essentially weightless.”

To achieve neutral buoyancy, about 200 pounds of ballast is added to the suit until the gravitational force pushing down equals the buoyant force from the water pushing up. This state of equilibrium means that there is no net force on the subject, so the person wearing the suit floats “weightless” at any depth in the water, which enables subjects (i.e., astronauts) to simulate tasks and procedures in conditions almost identical to those in space. “There is a drag force when you move through the water, which you of course would not have in space,” said Jacobs, “but because we tend to do tasks very slowly in space, we also move slowly in the water, which means that this drag effect is minimal.”

Although the MX-2 Suit is only for simulation purposes on Earth, some of its technologies will be integrated into spacesuits that will actually be worn in space. For example, a “heads-up” LCD display mounted in the upper right corner of the helmet allows the person wearing the suit to see things like checklists and task lists. Because the display is transparent, subjects can read displayed information without having their field of view blocked. A PDA (personal digital assistant) mounted on the chest section of the suit provides streaming video, so the subject can actually see what other cameras in the tank are seeing. And a speech recognition system allows the person in the suit to give verbal commands to the PDA regarding which camera views they want to see. “So now you have multiple sets of eyes that you can see through, including cameras that are on moving robotic platforms,” said Jacobs. “We see it as really enhancing situational awareness, so that you’re getting a ton of information about what’s going on in your surroundings.” 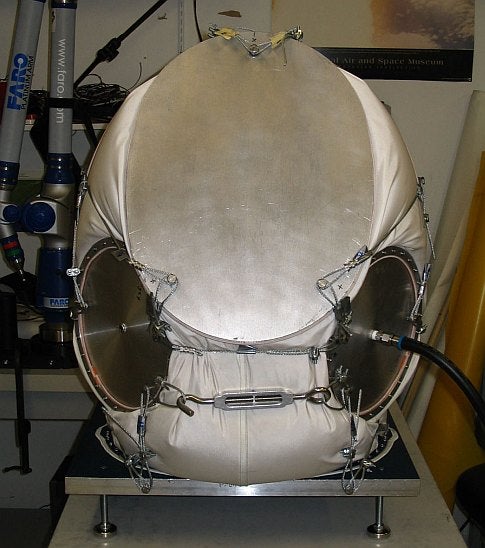 Jacobs and his team members are also developing the Morphing Suit, which promises to dramatically improve maneuverability. Picking up a rock sample or doing a minor repair may be relatively simple tasks on Earth, but in space — or on the Moon or Mars — astronauts are weighed down by hefty spacesuits that require a great deal of exertion and severely limit their range of motion.

The Morphing Suit is designed so that the frame of the torso changes shape in response to the astronaut’s movements. It includes a soft upper torso made of lightweight, three-layer fabrics with actuated linkages between the joints. In addition to providing better range of motion, the design also allows for custom sizing of the torso and resizing of the suit’s dimensions in space to adjust for the changes in body shape that occur in microgravity conditions. “The human spine elongates in microgravity, and these body shape changes mean that even a custom-made suit won’t fit as well once the astronaut is in space,” said Jacobs.

The current NASA suit design uses a hard upper torso, which works well when astronauts perform spacewalks from the Shuttle or the International Space Station. “The advantage of the hard torso is that you can mount things on it, like the portable life support system and the control module,” said Jacobs. “But weight is a big concern for suits that will be worn while walking on the Moon or Mars.”

Jacobs says that one of the big challenges of designing spacesuits is compromise between fit and don/doffability (getting the spacesuit off and on). Making a suit that’s easy to get on and off probably won’t fit as well, while a suit that fits an individual precisely is going to be very hard to get in and out of. “You can’t have an astronaut dislocating his shoulder trying to get into a spacesuit, so these are the issues we’re trying to address with the morphing upper torso concept,” he said.

“A spacesuit is basically a spacecraft that you wear, and it has to have all the same subsystems. But it can’t just have a rigid exterior structure — it has to be able to bend and move and be light enough to walk around in. It’s a unique engineering challenge.”