A Conversation With Robert Zubrin 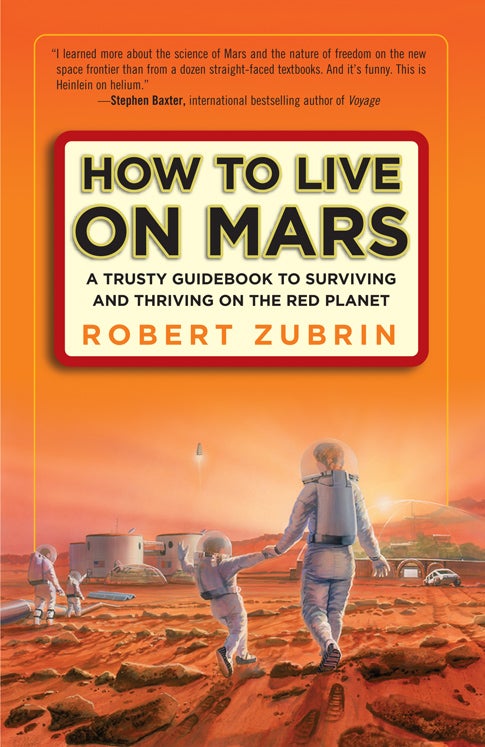 If you’ve ever fantasized about going to Mars, you’ve no doubt thought about how you’d get there, how long it would take, and how you’d survive the planet’s frigid temperatures. But you probably never considered things like how to invest your money on Mars, how to have a social life, and where to get a job there. In his new book, How to Live on Mars, Dr. Robert Zubrin moves beyond the idea of humans taking a brief exploratory mission to Mars, and considers what it would take to actually live there. Zubrin is the founder and president of the Mars Society and president of Pioneer Astronautics, an aerospace research and development company in Colorado. Popular Science correspondent Laurie Schmidt recently sat down with Zubrin to discuss his new book and his philosophy about the prospect of humans settling Mars.

How to Live on Mars

Why did you write How to Live on Mars and why now?

I wrote it to excite a new and younger generation. I grew up in the Apollo era, and there needs to be literature to capture the imagination of the new younger generation. In the book there’s a vision of a future civilization living and growing on Mars — it’s about creating a new branch of human civilization. As I see it, that new branch will have many of the positive and some of the negative aspects of America when it was young — a place where the rules haven’t been written yet. I think that when humans get around to exploring and building cities and towns on Mars, it will be viewed as one of the great times of humanity, a time when people set foot on another world and had the freedom to make their own world.

There are many different approaches you could have taken to writing a book about living on Mars. You chose to take a lighthearted, humorous approach — can you tell me why?

It was a new way to reach an additional audience. I told it straight in The Case for Mars, then I told it in the form of an adventure story in First Landing. So this time I decided to try science humor.

Why do you think it’s important for humans to colonize Mars and make it habitable?

I think that this freedom to be the maker of your own world instead of simply being the inhabitant of one that has already been made is a truly grand form of human freedom. We had that during the period from Plymouth Rock through the closing of the American frontier in the late 1890s. There’s a famous quote from a great historian, Walter Prescott Webb, that says “People will miss the frontier more than words can ever express. For hundreds of years they heard its call and bet their lives and fortune on its outcome.” This is why we still look back today at the time of the American frontier as a great time, despite the fact that it was filled with all kinds of harsh experiences and heartbreak.

So with Mars, there will be grand successes and there will be heartbreak. Not everyone will strike it rich, but everyone will get a chance for a new start. There’s a reason why millions of people in the Old World sold everything they had to get a ticket on a ship to get them to America. And for some of them it didn’t work out so well. But it did for enough of them that they’re still coming today.

In your keynote address at the Mars Society annual convention in August, you said: “The space program needs to be doing what it was doing in the 1960s, which was breaking unprecedented boundaries.” Why do you think Americans, generally speaking, have become uninspired by the U.S. space program? 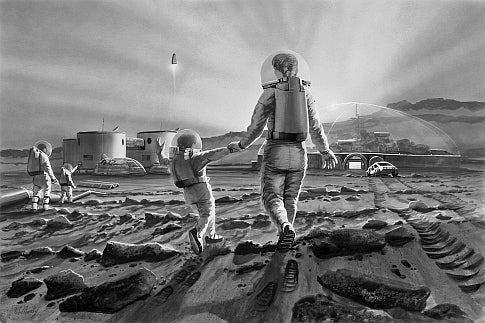 Because it has become uninspiring. Because it has not continued in the bold, heroic mode in which it began. In the 1960s, reaching for the moon meant just that. It was a metaphor for attempting the impossible, and we attempted it and we did it. And it inspired millions of people in every way. The number of science graduates in this country doubled in the 1960s at every level — high school, college, PhD. But it also inspired us in many other ways, because it said nothing is impossible.

For us to say we can’t go to Mars today is to basically say that we’ve become less than the people who got us to where we are today, and that’s something that we can’t afford. The risks associated with a human mission to Mars, given what we know today about Mars and about space technology, are much lower than the risks of the Apollo moon program were.

You’ve been called a “Mars maverick” and the “Christopher Columbus of Mars.” Why do think you’ve earned those titles? 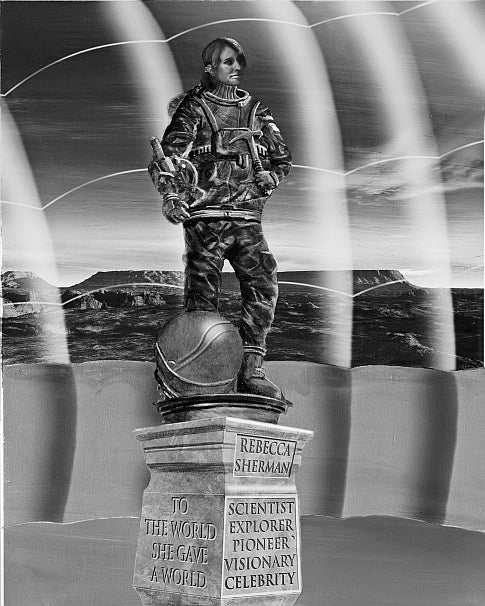 I’ve never attached those titles to myself, but why might someone choose to call me that? Columbus was passionate. He spent 20 years wandering from court to court trying to convince someone to give him enough money and a couple of ships to sail west. Now, no practical person would spend good money on good ships to just sail them off with no purpose in a direction that no ship had ever come back from. But Columbus finally did it. There’s a statue of Columbus in New York City, and it says “To the world, he gave a world.” On page 136 of my book, the picture of the statue of the character Becky Sherman is copied from that statue of Columbus.

It’s a common view that Columbus was just interested in finding a spice route to the Indies, and that was his sales pitch to the Spanish courts. But I actually believe that contrary to conventional history, Columbus was looking for unknown continents — he just couldn’t pitch it that way. Wernher von Braun pitched going to the moon to John F. Kennedy as a way of winning the Cold War. But in fact, von Braun had been interested in space exploration since the 1920s. So I don’t think we went to the moon because of the Cold War; I think the people who wanted to go to the moon had to sell the idea in Cold War terms. Ultimately, they were interested in expanding humanity into space.

So in that sense, I guess I am like Columbus. For the past 20 years I’ve been trying to make the case for reaching for Mars. Things happen because people make them happen. But I haven’t earned the Columbus title yet because I haven’t made it happen.

What will it take to realize a manned mission to Mars?

It will take a president who is willing to stand up in the spring of his first term in office and commit the nation to getting humans to Mars by the end of the second term. That’s the only way it can be done. It can’t be done if someone says, “Well, I think NASA should go to Mars eventually and I would like them to put it on the planning charts for the year 2050.” That’s meaningless. What Kennedy said was, “We need to do this before the decade is out,” which effectively meant before the end of his second term. If Kennedy had said, “I want to be to the moon by the year 2000” instead of 1970, we never would have made it to the moon, and space historians today would be saying, “Oh yes, someone had this idea about going to the moon back in 1961, but obviously we all know it never really could have happened.”

So, it takes vision and it takes commitment. And this is what George W. Bush lacked when he gave his “Vision for Space Exploration” speech in 2004, when he basically said (paraphrased), “I think we should have a visionary space program and you can start one after I leave office if you like.”

With the Phoenix mission and the Mars Exploration Rovers in the news during the past few years, there are doubtless many young people who have been inspired to pursue a career in space exploration. What advice would you give them?

I grew up in the 1960s and wanted to become part of the great space exploration effort, but when I graduated from college in 1974 the Apollo program was over and the country had moved into this pessimistic mode. We had entered the “age of limits.” For awhile I accepted that and went off from my chosen path and became a high school science teacher. And that’s a very noble profession, but it wasn’t my dream. Then at a certain point I said to myself, “This is not what I wanted to be doing when I was growing up.” So I went back to graduate school, got myself some engineering degrees and got a job at Martin Marietta — which then became Lockheed Martin — doing preliminary design of interplanetary missions. And I’ve been able to participate in the space program. It has been an enormous adventure, and who knows — I may succeed in making this happen. But if not, I’ve lived a life I’ve always dreamed of living. So what I say is, if you want to be a space explorer, then do what is necessary to be a space explorer. Push yourself to get the qualifications and get involved, whether on the industry side, or the NASA side, or the university side.

People make their own fates, and if enough of us make our fate to be space explorers, perhaps we can actually get some space exploration done.

Mars is not the final destination here, it’s just the direction. There are worlds beyond, and if we can open up Mars, it will be a statement that there is not just one world for humanity — that we have an open universe and an open future before us, with many new worlds and many possibilities.

How to Live on Mars will be released on December 2 online and in bookstores.