Using off-the-shelf parts, a start-up built a rocket accurate and reliable enough to fly itself around the moon 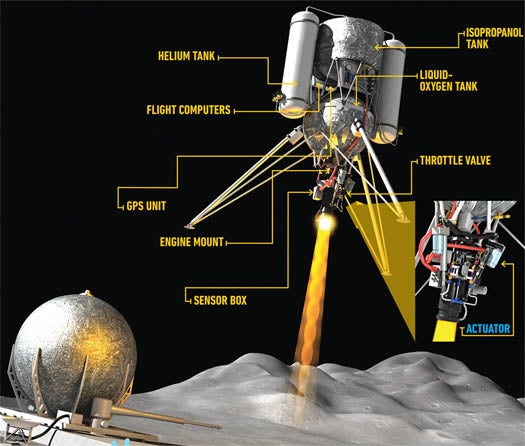 A robotic rocket that can repeatedly take off and land vertically would have endless uses: As a lunar lander that can park itself at a fuel station, gas up, and immediately relaunch to ferry supplies elsewhere on the moon. Or as a space-tourism craft that can touch down safely on helicopter-like landing pads. That’s why four years ago, NASA opened the $1-million Northrop Grumman Lunar Lander Challenge, a competition designed to encourage private companies to develop low-cost rockets with the precision, power and quick turnaround needed for moon and other missions. Last fall, an underdog team of six engineers at Masten Space Systems took home the prize. Their Xoie lander, assembled from commercial materials and parts, flew 50 feet above the Mojave Desert, navigated to a rocky target 50 yards away, and landed seven inches from its goal, beating rivals by two feet. Although Xoie (pronounced “Zoey”) might not actually fly on the moon, its design could influence future crafts that do. It also proved that you don’t need exotic, budget-busting technology to make a sophisticated spaceship. Here, Xoie’s $300,000 worth of parts explained.

Design Highlights on the Lunar Lander

Engine: Masten cut costs by making the conventional bipropellant rocket engine out of aluminum, an inexpensive, cheap-to-machine alternative to copper or graphite. Because aluminum tends to overheat—and because Xoie needs to tolerate several flights a day, unlike most spacecraft—Masten uses a more powerful version of the liquid-cooling system in standard rocket engines, in which the fuel itself flows outside the engine and absorbs its heat before being funneled into the combustion chamber.

GPS Unit: On Earth or in lower orbit, the vehicle gauges its location using an ultra-precise GPS unit. For the moon, however, engineers will have to come up with a different method, since the moon doesn’t have GPS satellites around it. Masten is considering adding lasers that scan the moon’s surface, so that the lander’s computers can compare the images with known maps of the moon.

Actuators: To move the engine, Masten bought electromechanical actuators typically found in industrial assembly lines. They can nudge the engine a fraction of an inch for minute course adjustments, or pitch it 30 degrees for quicker turns.

Sensor Box: This $20,000 inertial measurement unit, also used in unmanned aircraft, is one of the craft’s few actual aerospace parts. It contains motion sensors that measure orientation and speed, and it helps keep the vehicle on track in between once-a-second GPS updates.

Helium Tank: Helium provides pressure that forces the two propellants, liquid oxygen and isopropanol, out of their tanks at the right rates. The tank is custom-made of carbon fiber.

Liquid-Oxygen Tank: The valves on this spun-aluminum tank are standard aerospace parts, because they have to withstand the cold liquid oxygen needed to oxidize the fuel.

Isopropanol Tank: Xoie’s fuel is actually rubbing alcohol. Masten may switch to a more easily storable fuel, such as methane, for a lander that ends up residing on the moon.

Helium Tank: Helium provides pressure that forces the two propellants, liquid oxygen and isopropanol, out of their tanks at the right rates. The tank is custom-made of carbon fiber.